At Large,Top Story Abraham Accords,Bahrain,Israel–UAE Deal,Palestine,Saudi Arabia Palestinians Have Painted Themselves Into a Corner - The American Spectator | USA News and Politics
Menu
At Large
Palestinians Have Painted Themselves Into a Corner
As the Middle East comes together to make peace, they stand aside and sulk.
by A.J. Caschetta
Leaders from UAE, Bahrain, and Israel in the Oval Office before the signing of the Abraham Accords, Sept. 15, 2020 (Shealah Craighead/Official White House photo) 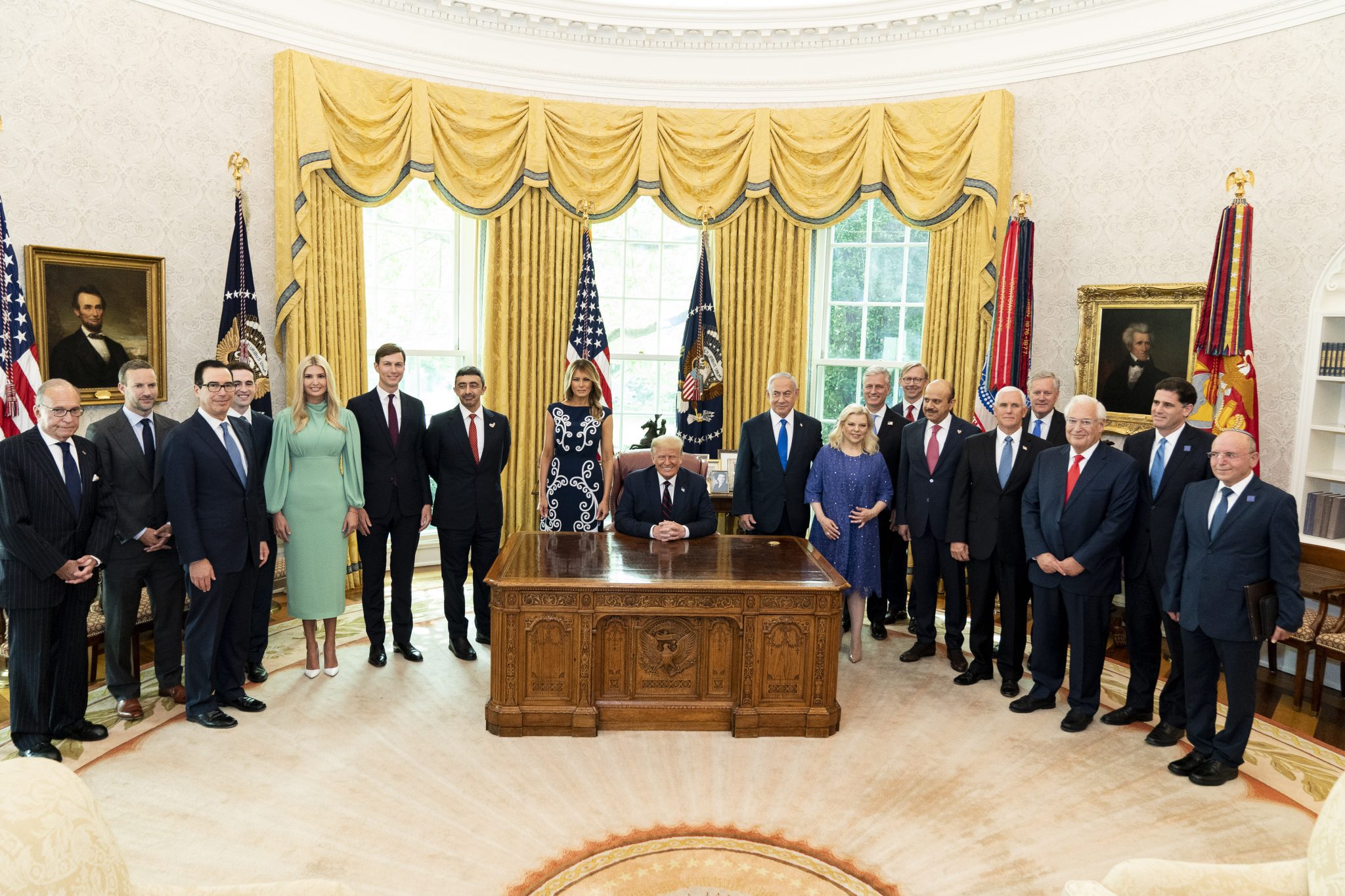 The United Arab Emirates (UAE) and Bahrain have joined Egypt and Jordan in an elite cadre, making it now four Arab nations with leaders who have transcended the limitations of their cultural inculcation by recognizing the state of Israel. Like Jordan’s King Hussein and Anwar Sadat of Egypt before him, Abu Dhabi Crown Prince Mohammed bin Zayed Al Nahyan and Bahrain’s King Hamid bin Isa Al Khalifa have acted in defiance of those who tell them that such relations with Jews are forbidden (haram) on religious grounds.

Yousef Al Otaiba, the UAE’s ambassador to the U.S., called the announcement “a win for diplomacy and for the region.” It should also be recognized as a loss for the Palestinians. The move provided incentive and opportunity for other Arab leaders to join their peers, many of whom seem to be lining up to broker peace deals with Israel, which means abandoning their blind loyalty to the Palestinian demands for sole ownership of all the land between “the river and the sea.”

The Palestinian leadership is in a rut. It has only “the three ‘no’s” of 1967: no peace with Israel, no recognition of Israel, and no negotiations with Israel.

News of the Abraham Accords has led to persistent rumblings that other nations (Oman, Sudan, Chad, and others) will soon recognize Israel’s right to exist, engage in diplomatic ties, open embassies, and all the other things normal nations do with other nations. President Trump continues to hint of an imminent deal between Israel and Saudi Arabia. The open secret of negotiations and cooperation between Israel and Arab states has come charging out of the closet.

So how are the Palestinian leaders reacting to their rapidly changing status among Arab nations? By complaining, calling the historic peace deal “treason,” and threatening more violence. They are burning American and Israeli flags in the Gaza strip, and burning posters of the Emirati crown prince and the King of Bahrain. Yawn. Change the channel – this is a repeat.

The Palestinians have painted themselves into a corner. Their leaders have marginalized them in the Arab world through seven decades of demands for loyalty, money, and diplomatic cover. And they have squandered the people’s dreams from the safety and comfort of offices funded by Arab leaders, previous American administrations, the European Union, and the UN.

Of course, it didn’t have to be this way. From the outset, Palestinian leaders rejected a Palestinian state by rejecting UN Resolution 181 and refusing to share the land that had long been home to Jews and Arabs. They blew their chances again for a state in the 1990s by reneging on their Oslo Accords obligations to end terrorist attacks. Ehud Barak and Bill Clinton offered them a state in 2000, but they wouldn’t take any deal that didn’t include a legal “right” for anyone claiming Palestinian ancestry to “return” to lands that constitute the state of Israel. In other words, any deal that doesn’t erase Israel is an unacceptable deal. By insisting on this “right of return,” they cling to an unachievable goal as the starting point.

With little to show for their efforts, they show no signs of changing their seven-decade-long strategy. Last year, when Donald Trump offered them $50 billion to make a “Deal of the Century” that would require them to recognize Israel and accept reality, they refused to even participate in a conference on the matter.

If their former patrons abandon them, as they appear one by one to be doing, the Palestinians may be left with only Turkey, working hard to lose its membership in NATO and any chance of ever joining the EU; Iran, dwindling down to a less powerful version of its formerly dreadful self; and Qatar, still rich but no military powerhouse. These are not impressive allies. The EU might stick with them for a while, but it is big on words and symbolic gestures, and once its leaders sense the change in direction, they too will likely go along with the Arab countries and council Palestinian leaders to reconsider their recalcitrance.

If only they would recognize reality and change their outlook (and leaders), the Palestinian people might yet make turn this loss into a win. Since the Abraham Accords specifically preclude Israel from annexing the so-called “West Bank,” their chances of achieving a state of Palestine might have increased, but only if they give up the fantasy of erasing Israel and recognize that they have lost that fight.

When UAE Minister of State for International Cooperation Reem Al Hashimy said the day before the Accords ceremony that the deal keeps “the Palestinian cause front and center” and “provides an opportunity for greater dialogue and bringing the peace initiative back to the table,” she was offering the Palestinians a door from which they may exit the corner they have painted themselves into. The question is, will they take it or will they just try to walk out and ignore the reality of their folly? After all, with decades’ worth of Israeli, American, and especially Palestinian blood on their hands, what does a little paint on their feet matter?

The Palestinian leadership is in a rut. It has only “the three ‘no’s” of 1967: no peace with Israel, no recognition of Israel, and no negotiations with Israel. Perhaps Mohammed Dahlan, the exiled former Fatah member in Gaza, will emerge as a beacon of realism amid the delusion. He has a number of factors in his favor as the only Palestinian leader of note who has not condemned the UAE peace deal. He lives in the UAE, is reviled by Fatah and Hamas alike, and has had a $700,000 bounty placed on his head by Turkey. On the other hand, he’s not exactly a blank slate, having spent decades as a Fatah member, including nearly a decade as Fatah’s security chief in Gaza. Plus, in the nearly two decades since the Oslo Accords, the Palestinians have conditioned millions of children to hate Israelis and blame all their troubles on “the Jews.” That brainwashing, which seems to get worse every year, will take decades to de-program, and will require more than one charismatic leader offering a new way forward.

Whomever they choose as their new leader(s), the Palestinian people should follow the momentum currently underway in the Arab world, accept reality, and build their futures with, rather than against, their Israeli neighbors. If they accept defeat in their efforts to erase the Jewish state, and make genuine peace both with Israel and with their situation, Arab countries will almost certainly reward them gloriously.

A.J. Caschetta is a Ginsburg-Milstein fellow at the Middle East Forum and a principal lecturer at the Rochester Institute of Technology.