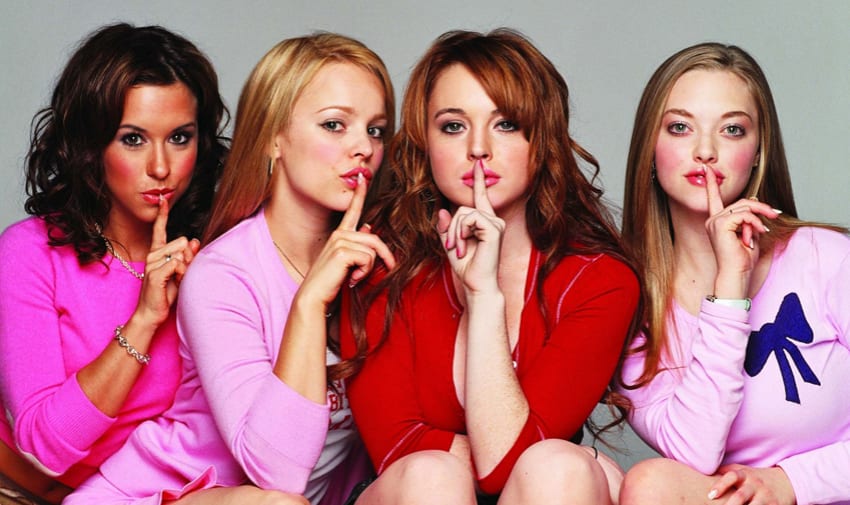 Rather than write about the mean girls right out of the gate, I chose, instead to focus on President Trump’s fine State of the Union turn. Read about it here.  Moving on from that, though, one of the most remarkable things to come out of the State of the Union is the unintended self-own by the Democrat ladies in white gabardine. Their purpose, it seems, was to bring attention to their purity and show solidarity with women. What they did is reveal the dark side of female power dynamics.

Women have a reputation for being competitive, unsupportive of one another, and cut-throat when it comes to resources, recognition, and mate-selection. Like chickens, the cliché is that they peck one another to death and enforce a hierarchy with their mean hectoring.

Alexandria Ocasio-Cortez and her coterie proved all those clichés true with their State of the Union behavior. She sat in the middle of her row surrounded by sycophants. She is the alpha among her tribe (no one out-alphas Pelosi, but she’s showing weakness, so she’s vulnerable to attack in a way that has been heretofore unthinkable). The women to her left and right deferred to her, mimicking her blank-faced hostility and stony glare. The looked to her to decide whether to applaud. They shrank back into their seats when they felt the impulse to stand and clap and saw that Cortez was not going to move. Worst, they stood out as obvious stooges because they all dressed in white and none of them looked as great as Cortez. She had time to plan her accoutre. Her retinue looked bland in the shadow of her style magnificence.

This dynamic was perfectly captured by the movie Mean Girls where the high school girls were likened to animals on the African plains. From a sociological perspective, the analogy is perfect, and encapsulated by the white-clad Democrat gazelles.

Another weird display by the women: that they only had strength in their gaggle. Most can relate to this dynamic. It’s something that mystifies teenaged boys at the mall or men at the bar. Girls travel in giggling packs, impenetrable by few except for the most audacious and brave of the male gender.

President Donald Trump is such a male. He’s a fearless alpha and made short work of the female attempt to find strength in numbers. He acknowledged their accomplishments and as they stood, clapping for themselves, he joined their glee. They didn’t even know what just happened to them. He had, in one easy sentence and amused expression, broken the barrier. It was masterful. His deft handling of the situation had me chortling. Anyone who wonders how he’s attracted the women in his life is utterly ignorant to the differences in male and female psychology.

But there’s something more. By sitting together and making themselves into an anonymous herd, the women diminished their individual impact. They dehumanized themselves. A few women abstained from this absurdity and I have new respect for them. Notably, Kyrsten Sinema wore hot pink and Kristen Gillebrand wore the D.C. power non-color, black. She further distinguished herself by ostentatiously eye-rolling and then illegally posting the video to raise money during the State of the Union speech. Still, at least she wasn’t a drone to the bratty Queen Bee Cortez.

In the movie Mean Girls, the girls, famously, wear pink on Wednesdays. This was the Democrats. This is year two of dressing alike and it was self-defeating. One hopes they wake up and stop the nonsense next year.

Women also try to shake the image that when they’re powerful they are heartless, unforgiving, and spiteful. The Democratic women, yet again, did nothing to dispel that notion. In fact, they reinforced it.

Sullen and strained, nothing could elicit a positive response from them except Trump’s aforementioned “Go Gurl!” moment. They could clap for themselves. They couldn’t clap for American exceptionalism. They couldn’t clap for WWII survivors or their liberators or the police officer who sacrificed his life to save them. They couldn’t clap for workers for ICE. They sat emotionless as the President described partial-birth abortion. The grimaced at the idea that America would never be socialist. When President Trump spoke of a country filled with wonder and innovation and sacrifice, they shook their heads in disagreement. They winced at criminal justice reform and even historically low unemployment for all people. It was a stunning display of well, meanness.

Mean girls. Women would not display this nonsense. They would wear the mantle of power with grace and magnanimity. They would not act like usurpers or a gaggle of insecure geese. They would know they belong there and act like it; strong enough to be seen as an accomplished individual.

It was quite a display. It did not help their cause.