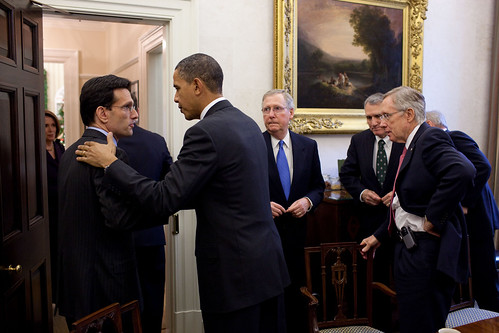 After a day’s reflection, Mitch McConnell’s back-up plan for raising the debt ceiling in case negotiations fail appears worse than it did before.

Essentially, McConnell’s plan would allow for a clean debt limit increase, devised in a such a way that President Obama would take all the blame. In that sense, it would achieve a (small) political victory for the Republicans, while avoiding a default on the debt.

The problem is that it seems clear that there are a number of compromise deals still available that would be far preferable to no deal at all. As Quin writes, “After all of the success in getting Obama to not just commit rhetorically to well over a trillion dollars in cuts, but to actually put on the table some specific entitlement savings (reportedly), it would be far worse to forfeit any spending cuts than it would be to allow a few minor tax loopholes to be closed.”

True, Obama’s reported offer wasn’t quite within the range of what’s acceptable. As Keith Hennessy argues, it was to the left of of the Simpson-Bowles proposal that failed. But, crucially, it was an early-stage offer. Despite the apocalyptic scenarios spelled out by various Democrats, there is still plenty of time for the negotiations to continue. If Obama’s initial offer was to the left of Simpson-Bowles, it was entirely possible that the final compromise deal could be to the right of Simpson-Bowles. And if, as Quin spells out, it consisted of significant spending cuts, including real entitlement reforms, that would be a far better outcome than authorizing $2 trillion more in debt with no plan to cut spending.

Getting there, however, would require hard bargaining by Republicans. As recently as Friday, GOP leadership was united for significant spending cuts and against tax hikes — a very strong hand to play.

McConnell’s ploy, however, undermines that negotiating strategy. If the deal the GOP is pushing is too much for Obama, he could simply aim for the contingency option under McConnell’s plan. In fact, just by introducing this plan, McConnell has demonstrated the weakness of the Republican position, and made it less likely that Republicans will find a favorable deal with Obama.