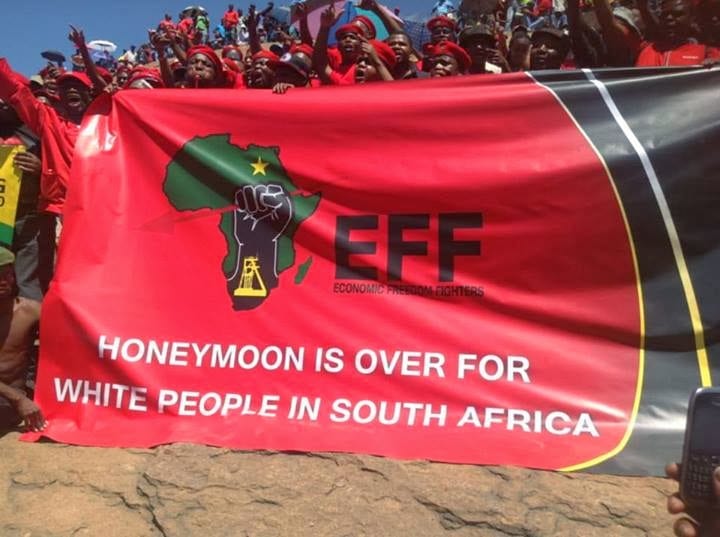 Plaas Moorde, that is Afrikaans (the language of South Africa) for “farm murders.” The hills of Polokwane, in South Africa’s Limpopo Province, are dotted with over 2,000 makeshift white crosses. A cross is added for every South African farmer who is murdered. This has occurred since the memorial’s founding in 1994. Thus far, 75 crosses have been added over the last 13 months — and this year has seen the lowest incidence of farm murders.

The media isn’t wrong in a technical sense: 2,000 murders of men, women, and children over 25 years does not necessarily qualify as a genocide. However, given the political climate and the declining economic conditions — as well as the rapid imbalance in demographics — South Africa is clearly on the road to a genocide of its white farmers. After all, the first step toward dehumanizing a minority group — the white South Africans are a minority in that country — is to deprive such groups of their property. From there, it becomes increasingly easier to reduce such groups to nothing in the eyes of the rest of the country’s populace.

What’s more, there is an ethno-political component to these massacres that cannot be ignored. The murders began in 1994: the same year that the initial land redistribution programs in South Africa were implemented. Presently, some of the worst killings have been perpetrated in places like Limpopo Province.

Further, a dangerous admixture of socialism, populism, and nationalism has gripped South Africa for the last few years. This has coincided with the general decline in economic prosperity there. According to Genocide Watch in 2015, “the murder rate among South African white farmers is four times higher than among other groups of South Africans.” Plus, a succession of South African leaders has routinely referred to the white South African farmers as “settlers.” In other words, the white South Africans are viewed as little more than foreigners by the same government that is charged with protecting their property rights.

Bubbling up along with these trends has been the rise of the Economic Freedom Fighters (EFF). A neo-Marxist revolutionary group led by the firebrand populist Julius Malema, this growing national movement has pushed the country’s politics to the far Left. This is especially true as Malema’s movement places increasing pressure on the ANC (Nelson Mandela’s former party) to either act on the radical notions of ethnically driven land redistribution or lose power.

For his part, Malema has vowed to die for the cause of forced land redistribution (should it come to that). He has also spun wildly anti-Semitic conspiracy theories about “Jewish agents” training white farmers in terrorism tactics, so as to gin up the rabid anti-Semitism that dominates most Marxian movements. Malema vehemently denies that a white genocide is taking place — as do the ANC leaders running South Africa today. In Malema, in the words of the Australian Broadcasting Service, South Africa has “a shameless populist offering old-fashioned communist remedies.”

Reflecting on the recent torture and murder of his parents, white South African farmer Jo-An Engelbrecht explained of the perpetrators of the farm murders: “Not only do they kill, but the way they kill, they torture you. This is hate. This is political hate.” And, at EFF rallies, Malema can be heard ending his fiery speeches with the old ANC war-song: “We have taken our land back! Shoot to kill!” Other “classics,” such as “Shoot the Boer” have been heard at similar political rallies since 2012.

Things will continue to deteriorate in South Africa, the more the economy collapses. And, the economy will only worsen if any of Malema’s programs are enacted (as they’ve already started to be). South Africa is just the latest historical example proving that Marxism kills.