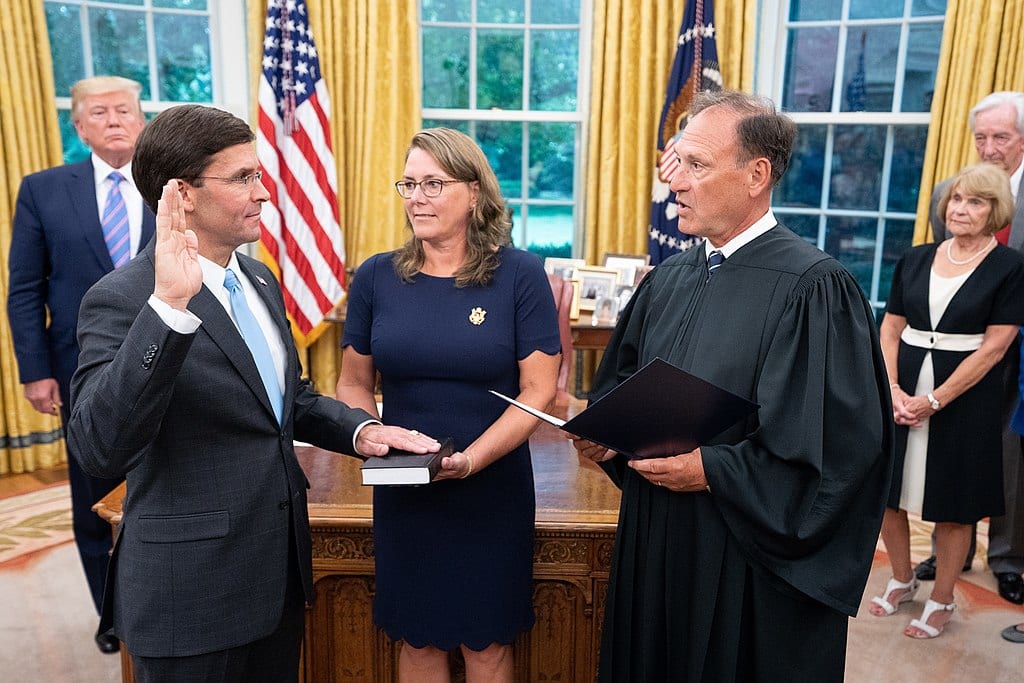 With last week’s confirmation of President Trump’s new Secretary of Defense, Mark Esper, now in the rearview mirror, pro-Trump Republicans can finally dare to hope. That is, they can dare to hope that the Department of Defense (DoD) will at least be run by a nominee not floated by multiple anti-Trump figures as a competitor for the president. Not the sort, in other words, who will flee the White House in a fit of pique over Trump’s decision to keep a campaign promise.

Such a person is desperately needed at the moment, particularly in view of the president’s recent victory at the Supreme Court, which allowed him to carry on using military money to build the famed border wall of his campaign promises. Given that, Trump will need a man at the Pentagon who is committed to freeing up as much military spending as possible without compromising America’s ability to defend itself against all threats, foreign and domestic. It’s a tough job, but one that Esper, who comes from a previous position as Secretary of the Army, is well equipped to do.

This naturally raises the question of where Esper might look for such cuts. A few obvious possibilities suggest themselves.

To begin with, at the risk of hammering the importance of differentiating himself from Mattis, Esper will have to be far more conservative about advocating for military action abroad. While Mattis distinguished himself as an endlessly quotable warrior-philosopher during his tenure at the DoD, when it came to interventions abroad in countries like Iran or (obviously) Syria, the Defense Secretary was woefully wedded to Washington missionary groupthink about going abroad in search of monsters to destroy. Some even suggested he carried a grudge against Iran, specifically, due to his service in the Marine Corps.

With any luck, Esper will not be so hamstrung by the sort of “honor before reason” approach that Mattis advocated. To be sure, Iran is a major threat to United States interests, in a way that Syria is not, and there are plausible scenarios in which the United States might have to send the Islamic Republic a stern message about interfering in our affairs, and those of our allies. But that message would have to be marked by the sort of restraint that President Trump showed in, say, only bombing Syrian facilities used to make chemical weapons when Syria defied the United States’ warning not to use such weapons. In other words, dealing with Iran will take a surgical approach, not the hammer blow demanded by the more hawkish members of the foreign policy community, possibly including National Security Adviser John Bolton. To take such an approach is essential not only to saving American money, but also American lives.

When it comes to money alone, meanwhile, there is the matter of Mattis’s hasty decision to almost hand Amazon control over the entire cloud-computing capacity at DoD, a decision that is even now being walked back and possibly halted forever, thanks to President Trump’s criticism of the process. Let’s not mince words: this $10 billion project was not only ill advised from a technical standpoint, but from a political and economic one as well.

Technically, it made little sense to pour all of the department’s data onto a single server, effectively putting Americans at risk if just one spectacularly gifted hacker managed to penetrate that server. Politically, there was no good reason to plant the United States’ defense capabilities on a server owned by a notorious critic of the president. Economically, handing Amazon monopoly power over all cloud computing done by the DoD was hardly the way to encourage innovation in cybersecurity, which is needed now more than ever. Not to mention, Amazon had practically bribed its way into getting the contract. All these concerns, and more, were voiced by Republicans, and thankfully, President Trump is interested in listening to those concerns, now. Esper would be well advised to do the same.

And then, finally, there are legacy Defense department contracts that have already wasted years and hundreds of billions of dollars: projects like the F-35 Joint Strike Fighter, a piece of military technology that, despite spurious comparisons to the iPhone, would be more accurately compared to the infamous Samsung Galaxy Note 7, which had to be recalled due to literally exploding. Similarly, the F-35 is still dogged by fatal technical problems, so much so that Lockheed Martin has had to (finally) lower the price for the plane after decades of development, and hundreds of billions of dollars more spending on it than expected. To put this in perspective, canceling just one order of F-35 planes would save the Defense Department so much money that President Trump could build the original $25 billion version of the wall he had envisioned and still have $9 billion left over from those savings alone. There’s no reason why this project should still be funded, and one hopes that Esper will press that point home to the president.

In summary, Mark Esper enters a job in which he is required both by the president’s priorities and by the needs of the American military to effectively act as the anti-James Mattis. To do so is likely to earn him far less fawning coverage than the former Defense Secretary, but at least he can take comfort in the fact that the American people will be grateful for his keeping a vigilant eye on their children — and their taxpayer dollars.