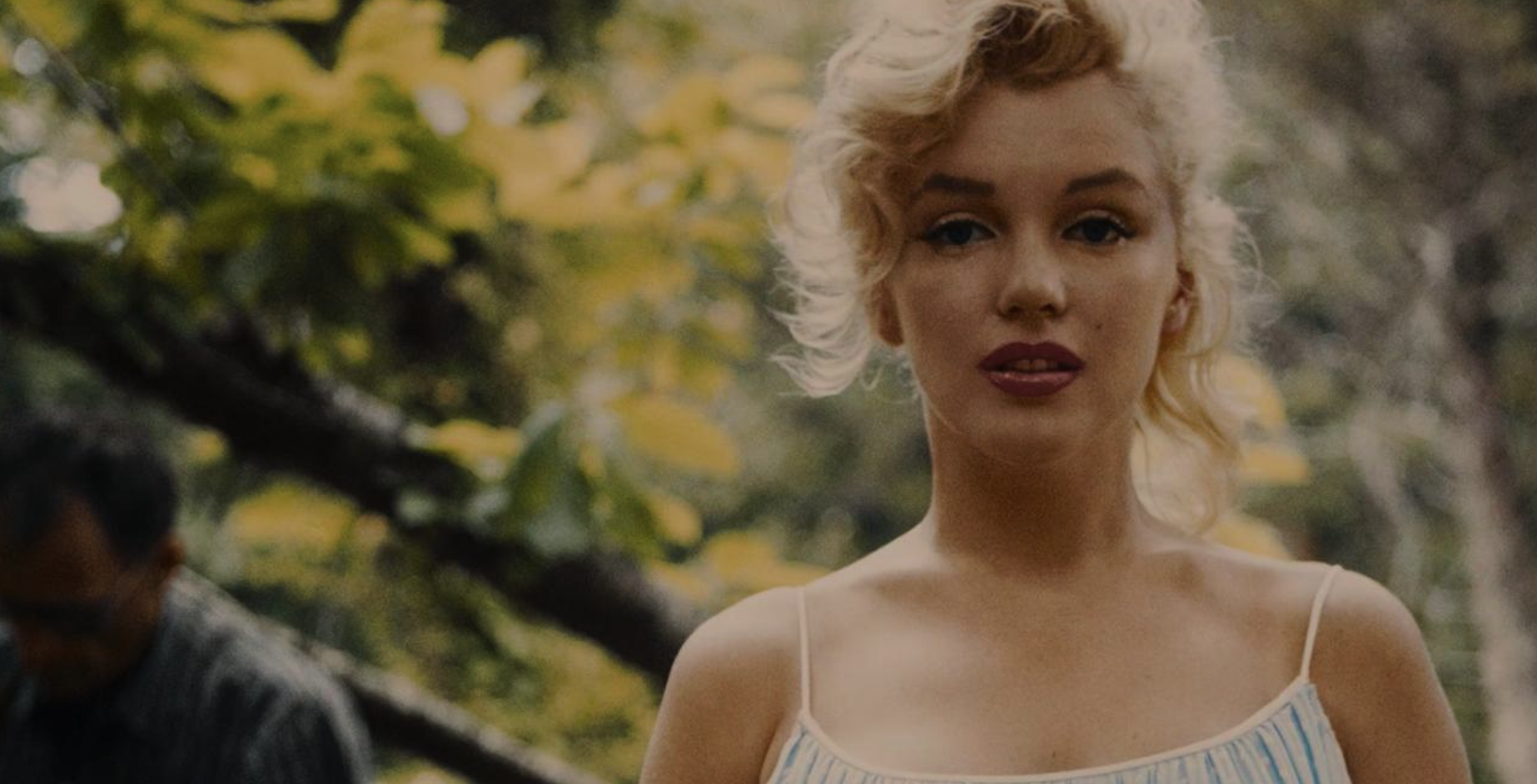 When she was alive, everybody wanted a piece of her; after her death that didn’t change. Elton John hit No. 11 on the U.K. charts with his 1973 song about her, “Candle in the Wind”:

Of course, in 1997, Elton rejiggered the song — as one does — into a tribute to the recently deceased Princess Diana (because, let’s face it, there were no two women more alike than Marilyn Monroe, born to a poor, mentally ill single mother, and Diana Spencer, daughter of a viscount). The Diana version not only went to No. 1 but became the second-biggest-selling single of all time, after “White Christmas.”

Truman Capote, for his part, wrote a memoir of Marilyn — actually a purported transcript of their conversation on the day of actress Constance Collier’s 1955 funeral in New York — that first appeared in Andy Warhol’s Interview and was later included in Capote’s 1980 collection Music for Chameleons. Its title, “A Beautiful Child,” was lifted from Collier, who’d told Capote, “She is a beautiful child…. I don’t think she’s an actress at all, not in any traditional sense. What she has — this presence, this luminosity, this flickering intelligence — could never surface on the stage. It’s so fragile and subtle, it can only be caught by the camera.”

Capote’s old nemesis Norman Mailer put out his own Marilyn book in 1973. A volume of photographs of Marilyn had already been compiled; Mailer was brought in (and paid an obscene advance) to provide an accompanying text. Ripping off — sorry, drawing on — biographies by Maurice Zolotow, Fred Lawrence Guiles, and Norman Rosten, from which he quoted at (ahem) generous length, Mailer produced 300-plus pages of pure hackery: “She was our angel, the sweet angel of sex, and the sugar of sex came up from her like a resonance of sound in the clearest grain of a violin…. Marilyn was deliverance, a very Stradivarius of sex.”

Even Mailer was outdone, however, by that quintessential literary hack, Joyce Carol Oates, whose 2001 Marilyn novel, Blonde, is an inert monstrosity. (“After 738 pages,” wrote the Guardian’s reviewer, “she is no more vivid than had we listened to ‘Candle in the Wind’ on the car radio.”) Marilyn’s third husband, Arthur Miller, got a play (After the Fall) out of her; Ben Hecht got a book (My Story), based on notes he kept while working with her on a prospective autobiography. (From the promotional copy: “The Marilyn in these pages is a revelation: a gifted, intelligent, vulnerable woman who was far more complex than the unwitting sex siren she portrayed on screen.”)

There have been countless other biographers, whose publishers promised that they alone had penetrated the glamorous surface and grasped the real Marilyn: Anthony Summers (“this book … reveals unknown truths, some funny, some very sad, about this brilliant but troubled woman”), Sarah Churchill (“sex goddess and innocent child, crafty manipulator and dumb blonde, liberated woman and tragic loner … [this book] reveal[s] the meanings behind the American myths that have made Marilyn what she is today”), Barbara Leaming (“a complex, sympathetic portrait that will totally change the way we view the most enduring icon of American sexuality”), Gary Vitacco-Robles (“Goddess … Legend … Icon … You thought you knew her … but never before like this”), Donald Spoto (“Many books have attempted to explain her allure and tell her story, but none has succeeded as well as this work”), Charles Casillo (“this biography cuts through decades of lies and secrets and introduces you to the Marilyn Monroe you always wanted to know: a living, breathing, complex woman, bewitching and maddening, brilliant yet flawed“).

Then there are the movies. Michelle Williams portrayed Marilyn in My Week with Marilyn (2011). Oates’s novel became a 2001 TV biopic; a remake will debut later this year on Netflix.

In the meantime, however, we have another new Netflix offering. The Mystery of Marilyn Monroe: The Unheard Tapes, directed by Emma Cooper, is a two-hour documentary that roughly divides into two parts. In the first, we’re dragged for the thousandth time through Monroe’s life, and no cliché about her is spared: “She had a very naive quality.” “There was something so vulnerable about her.” “She was very bright and [eager] to learn.” “She had a great untapped dramatic talent.” She felt “terrible … about herself.” Her sex life consisted of “men, eminent men, over and over again,” but she “never did think [sex] was all that important.” We hear Marilyn herself on tape: “Happiness. Does one ever know that?”

The documentary’s second part, about Monroe’s death, is based on research carried out by Anthony Summers (see above) for his 1985 bio, Goddess: The Secret Lives of Marilyn Monroe. The official cause of her death, which took place at her Brentwood home on the night of August 4, 1962, was an intentional overdose. This explanation has been questioned ever since; indeed, Marilyn’s death has been the topic of more investigations and hypotheses than virtually any other of the last century, excepting those of her lovers Jack and Bobby.

And of course, the revisionist theories about her death — as served up in Mailer’s and Oates’s hack jobs as well as in books like The Assassination of Marilyn Monroe (1999), Marilyn Monroe: A Case for Murder (2011), and last year’s Bombshell: The Night Bobby Kennedy Killed Marilyn Monroe — have uniformly zeroed in on her relationship with the Kennedys, who, it’s said, knocked her off because she knew too much.

As the Netflix show reminds us, Marilyn first hooked up with JFK and RFK in the 1950s. But when Jack got elected, she became a liability. Believe it or not, they actually discussed confidential matters with her. (Shortly before her death, she told a friend that she’d just argued with Jack about atomic testing.) The Kennedys knew that Arthur Miller was a communist, as were others in her social circle; some even had links to Castro. What if she blabbed to them about things the Kennedys had told her? Plainly, she was a national-security risk. (READ MORE from Bruce Bawer: West Side Story Playwright Turns Trans Activist)

Netflix’s documentary plays up this murder talk. We hear about things that happened on the day of Marilyn’s death that were omitted from the official account. The widow of Marilyn’s agent remembers him being summoned that night to the Brentwood house. An ambulance driver says that Marilyn was still alive when taken to the hospital. Marilyn’s housekeeper admits that Bobby was at the Brentwood house hours before her death.

“Who was at the house? What were they doing? Why were they there?” Summers asks portentously. But — spoiler alert — it all turns out to be smoke and mirrors. Summers’s conclusion: the coroner was right; Marilyn committed suicide. Of course the Kennedys didn’t have her killed: what do you think they were, Clintons? This whole show, then, was just one more sleazy effort to breathe new life into Marilyn Monroe’s much-exploited, now-60-years-dead corpse.

Well done, Netflix! Maybe after the Queen kicks off, Prince Harry and Meghan Markle, as part of your $100 million deal with them, can produce a cheesy documentary suggesting that she was knocked off, too. Good luck with that.