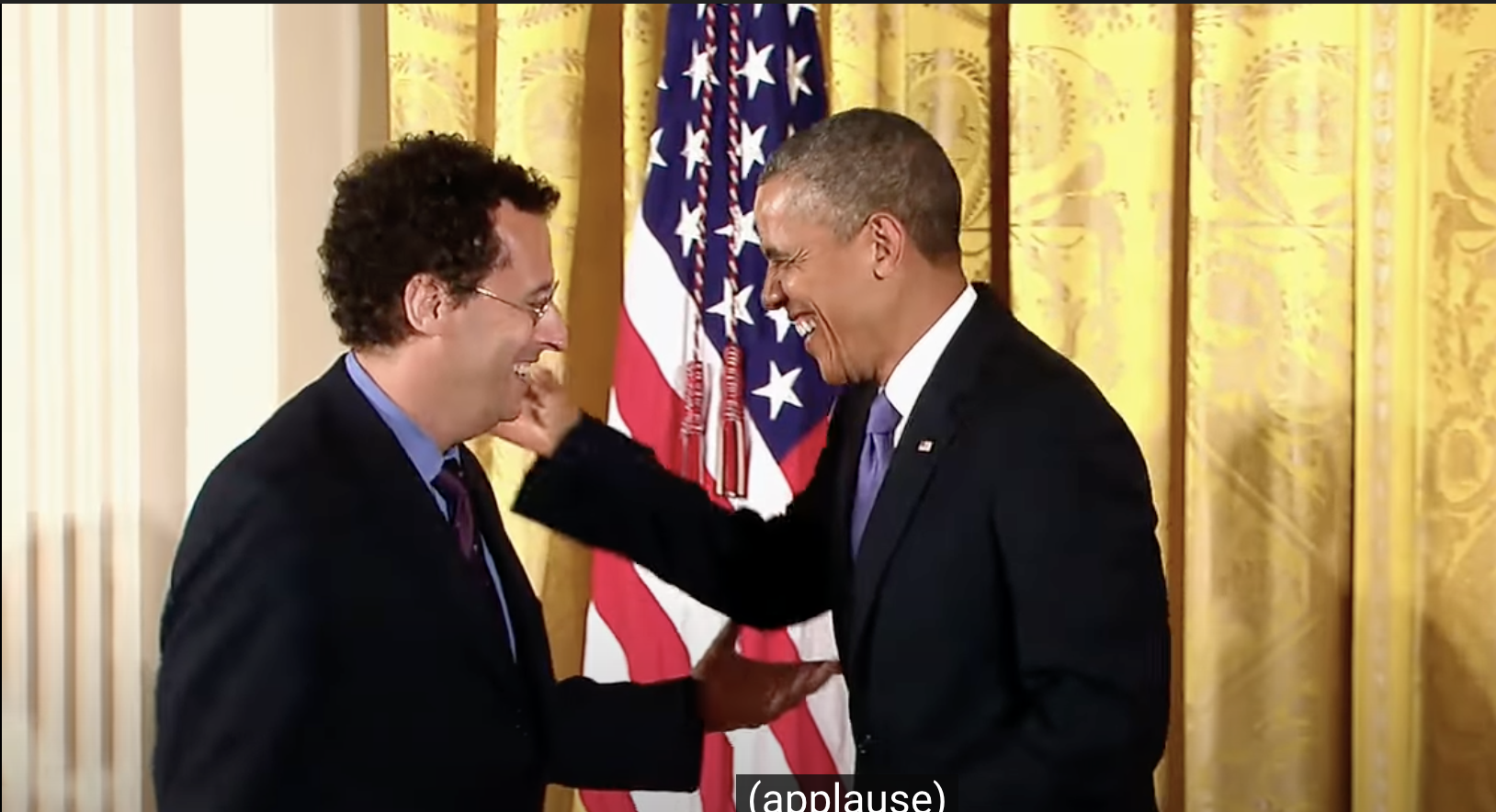 Consider him a great playwright and screenwriter, if you wish — call him, for that matter, as some have done, the greatest living American dramatist — and, while I couldn’t disagree more, I won’t argue with you, either. But I must insist that when it comes to politics, Tony Kushner is a fool and a tool, always and ever mindlessly in thrall to the latest progressive ideology.

On April 18, a handy reminder of this fact, in the form of an audiotaped interview with Kushner by Kara Swisher, was posted at the website of the New York Times. But before examining this exchange, let’s flash back to 1994, when the Nation published an article by Kushner, “A Socialism of the Skin,” in which he sneered at gay activists (including — full disclosure — myself) whose primary objectives included same-sex marriage and the right of gays to serve openly in the military. Such goals, Kushner argued, were deplorably vanilla, conservative, assimilationist; instead of wanting to fit into a straight-dominated society — to take part in its rituals and serve in its armed forces — gays should, he contended, aim to free themselves — and everyone else — from oppression “by the depredations of capital.”

For Kushner, in short, as for many other self-identified gay-rights activists, the gay-rights movement was never really about achieving equality for gay men and women; it was about hijacking the lives and fates of gay people in order to promote radical ideas with which most of them had no sympathy whatsoever. Compared to those radical ideas, Kushner found our “assimilationist” goals “dispiriting,” offering “very little in the way of hope, and very little in the way of vision.” As he explained, “I expect both hope and vision from my politics.” Also utopianism. He quoted Oscar Wilde: “A map of the world that does not include Utopia is not worth even glancing at.”

Well, in the end the “assimilationists” won. We got same-sex marriage and the right to serve openly in the military. Kushner gladly took advantage of the benefits of our victory: after he’d spent years arguing that gays should model sexual rebellion instead of aping heterosexual domestic commitment, guess whose was the very first same-sex wedding to be announced in the New York Times?

It’s the trans movement — not the resistance to it — that represents a threat to gay rights, as well as to women’s rights.

Anyway, flash forward to his recent Times interview, which is devoted largely to the plight of trans people. Note that in his 1994 Nation piece, he didn’t breathe a word about trans rights; indeed, while listing a slew of “oppressed” groups to whose liberation he felt the gay-rights movement should dedicate itself, he never so much as mentioned trans people. Today, however, reading his exchange with Kara Swisher, you’d think he was a lifelong advocate for trans rights.

He started by denouncing the just-passed piece of Florida legislation that’s been dishonestly dubbed the “Don’t Say Gay” law. Now, not too many years ago, few Americans, left or right, gay or straight, would have blinked at the idea that it was inappropriate to discuss sexual orientation or “gender identity” with pupils in kindergarten through third grade “in a manner that is not age-appropriate or developmentally appropriate,” as the bill says, or that it was wrong for teachers to hide from parents any “change in services from the school regarding a child’s mental, emotional or physical health or well-being.”

That’s the gist of the Florida law, which couldn’t be more reasonable. But for Kushner, it was nothing less than “an abomination” — the work of far-right Americans who are trying to drag America back into the days of the closet and to return it “to some fantasy of exclusive control by white straight men.” On the contrary, it’s the trans movement — not the resistance to it — that represents a threat to gay rights, as well as to women’s rights. For one thing, trans ideology makes a joke out of sexual identity: what does it mean, after all, to be a woman who grew up as a girl if a man, simply by saying so, can instantly become every bit as much of a woman as you are? For another thing, trans ideology renders the very concept of sexual orientation meaningless: what does it mean to be gay — that is, to be a person who is constituted in such a way as to be attracted romantically and sexually to members of one’s own sex — if an individual can magically change his or her sex between one moment and the next?

You’d think that Kushner, who in his own way has long thought of himself as a champion of gay rights, might be inclined to pause over this problem. But he doesn’t even seem to understand it. All he seems to care about, deep down, is that in the year 2022 the progressive thing to do is to support the trans agenda to the hilt. So that’s what he does, and he dials it, as always, up to 11. Ranting in his interview about “these terrible people in Florida,” he asserted that the Florida law is “obviously … not about teaching kindergartners about … gender” but is really about “same-sex marriage and adoption.” In other words, the law isn’t about what the text of the law really says, but about something else entirely. How exactly does that work?

Kushner went on to approvingly quote Bertolt Brecht: “The bad new things are always better than the good old things” — meaning that the bold new ideas that the majority of people deplore as “bad” are in reality preferable to the comfortable old ideas which they still cling to and perceive as “good.” This is, needless to say, the doctrine of a knee-jerk revolutionary for whom the struggle to overthrow societal norms is always and everywhere desirable. Brecht — just as a reminder — was a communist who happily accepted the Stalin Prize in 1954. Kushner has often cited him with admiration.

For a while during his Times interview, Kushner veered away from the trans issue in order to skewer — guess who? — Donald Trump. Unsurprisingly, Kushner turns out to be one of those leftists who hate Trump so much that he now actually has good things to say about never-Trumpers (“God bless them, the never-Trumpers”) and about the Republicans of a few decades ago whom he used to revile. That many of those old-time Republicans were sincerely anti-gay, whereas Trump was our most authentically pro-gay president ever, is another fact that seems lost on Kushner.

He also parroted the calumny about widespread police targeting of “young Black people.” And he dismissed the charge that critical race theory is being promoted in Virginia schools. When Virginia parents complain about CRT, he claimed, what they’re really saying is, “Don’t talk about Black people any more.… Don’t talk about trans people any more.” Can Kushner really believe this, given that many of the parents who’ve complained about CRT at school-board meetings are black? (He also ridiculed the claim that some teachers are teaching kids “to be unhappy that they’re white.” In fact that’s exactly what many of them are doing.)

But soon enough, Kushner returned to the trans topic. Asked why M-to-F trans athletes competing against biological women has become such a hot-button issue, Kushner had an answer: since “it’s not OK now … to sneer openly at gay men and lesbians,” right-wing bigots had to find another group to “make miserable and laugh at.” So they picked transgender people. “As long as they present a grotesque caricature of what trans people are and what trans people want,” he said, “they can get everybody in a state of hysterics.”

But what of the female athletes whose years of training are being mocked, career prospects damaged, and female identity rendered meaningless by the likes of Lia Thomas? Kushner loftily dismissed their complaints. “The number … of trans girls who want to compete” in sports, he assured listeners, is “minuscule”; the whole thing is a “pretend crisis.” So much for women’s rights. (The #MeToo movement is sooooo 2017.) Today, concern about the psychological well-being of one biological male who claims to be a woman trumps concern about any number of biological females who are being screwed over, in one way or another, by his claim.

Kushner’s interview concluded with a few words about the remake of West Side Story, written by him and directed by Steven Spielberg, whom he praised as a “genius,” “awe-inspiring,” a “mensch,” a “progressive” who “cares about things that decent people need to care about.” Yes, it’s all about “caring about” things — about making gestures, about being, as they say, “performative.” Apropos of West Side Story, Kushner quoted Brecht again: “the solidarity of the oppressed for the oppressed is the world’s one hope.” It’s important, he stressed, making clear that he hasn’t shifted an inch from his 1994 politics, to “fight for the liberation of all.”

Yes, Kushner would have us believe, that’s precisely what Spielberg is doing in West Side Story and in all his other activities, both professional and personal: fighting for “the liberation of all.” Spielberg fights for liberation in his mansion in Pacific Palisades, his mansion in the Hamptons, and his mansion in Naples, Florida — just as Kushner participates in the struggle from his homes in Manhattan and Provincetown, Massachusetts.

Oh, well. There’s something almost comforting about Tony Kushner’s political predictability across the decades, his perfect imperviousness to reason, logic, and the plain evidence of his own eyes and ears. A Glenn Greenwald or Dave Rubin or Russell Brand, confronted by objective facts that he can’t reconcile with his ideology, might do some thinking, reevaluate his worldview, and end up somewhere else on the political spectrum than where he was before. But Kushner, no matter what the burning issue du jour, can always be found on the barricades, shouting the same old slogans.

Because for him, it’s never really about the actual issues supposedly at stake, and never really about achieving revolutionary change. (Surely he doesn’t believe for a second that such change is in the cards.) No, for this man of the theater it’s all about being involved in the drama of the revolutionary struggle itself — about being, always and ever, on those barricades, fighting heroically for the oppressed against the capitalist villains. Of course, the drama and the barricades don’t actually exist outside of Kushner’s own famously fecund imagination; the reality, which he’s managed to push out of his mind for decades now, is that he’s a capitalist success story, a man of immense wealth and privilege who has no intention of ever sacrificing so much as a fraction of his comfort for the benefit of the suffering masses.