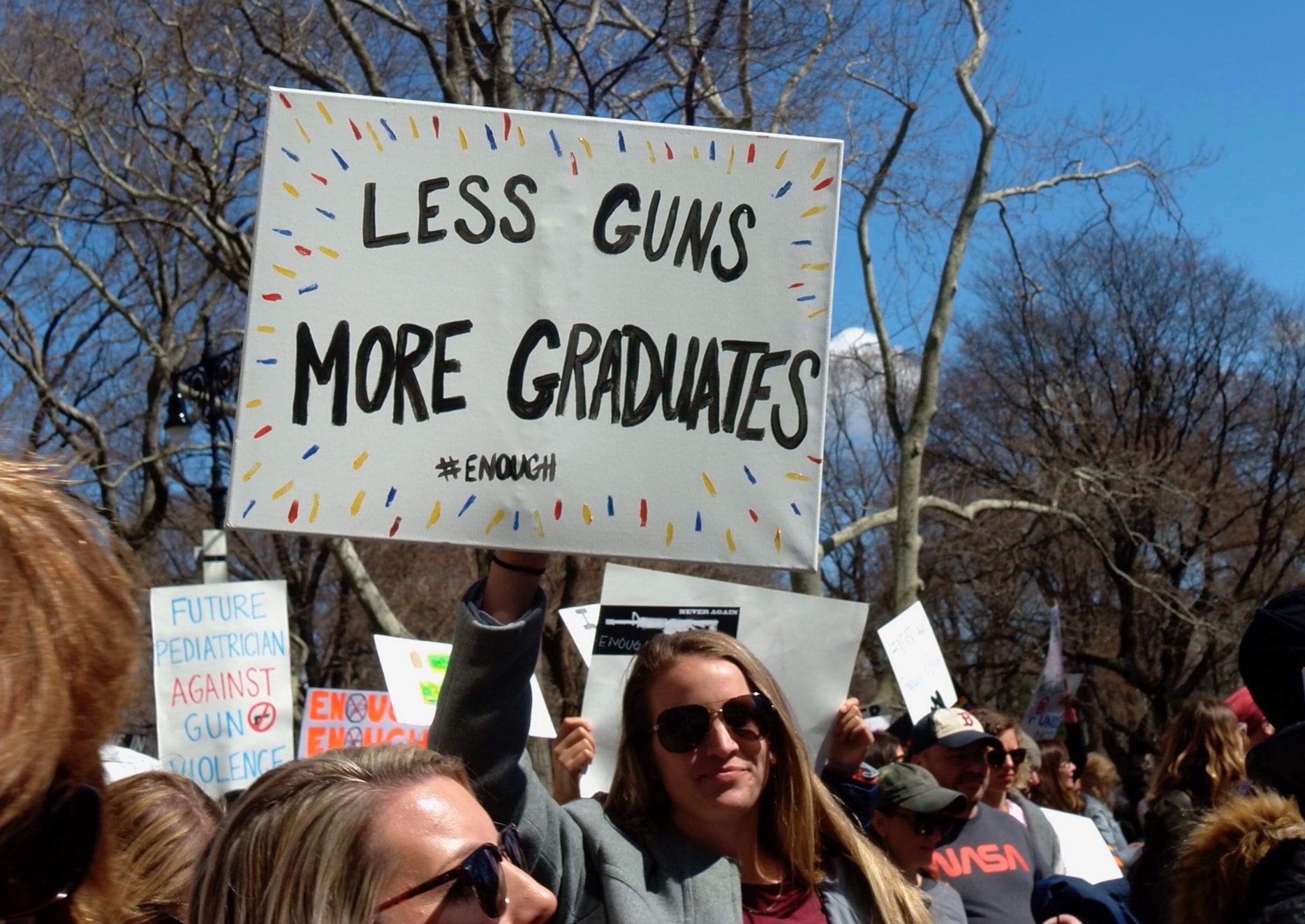 On Saturday morning, news helicopters whirred loudly in the skies of Manhattan, hovering over Columbus Circle and Central Park to film the March For Our Lives anti-gun rally.

As many as 100,000 marchers marched from Central Park West to Midtown on Saturday in favor of gun control, organizers said. The exact number and who did the organizing were hard to determine. The spectacle was a well-staged media hit, topping the news all day, with message journalism having a field day nationwide.

Since the Feb. 14 Marjory Stoneham Douglas High School shooting in Parkland, Florida, high-profile celebrities and thought makers have pitched March For Our Lives rallies in Washington, D.C., Manhattan, and hundreds of other sites. George Clooney, Oprah Winfrey, Jeffrey Katzenberg, Steven Spielberg, and Justin Bieber are among those who have received top billing as kickstarters.

The New York rally brimmed with our-lives histrionics. “The adults failed us and now 17 people are dead,” Meghan Bonner, a Parkland student, told the crowd from a platform at West 61st Street. According to the New York Post, Bonner wept as she recalled the shooting that has sparked a nationwide outcry. “I want to see change,” Bonner said.

Don’t we all, Meghan.

Megan and the great majority of marchers are ignorant pawns of politically ambitious celebrities who seem eager to turn citizens into leftist believers. I know some marchers. One is a child-protective Upper West Side feminist Tiger Mom, daily fighting gun violence, racism, President Trump, and all things Republican with soul and heart.

This righteous mom and others like her simply cannot — will not — process the obvious: that gun violence is to a large degree a ghetto thing. Illegal handguns in black hands — not crazy white boys — are the nation’s major killing machine. (Ironically, Hollywood is doing its best through its seductive video games and entertainments to turn low-wattage white boys and everyone else into sociopaths.)

I grew up in the far West, hunting birds, comfortable with pistols and a 16-gauge Ithaca shotgun, as were my father and mother. I can’t quite muster the Upper West Side’s gun fear and loathing. But neither can I defend the paramilitary toy boys, whose private arsenals and so-called gun shows are indeed causes for alarm. I have no problem with waiting periods, background checks, limits on magazine capacity, and so forth. I personally like the right of self-defense in one’s home and think the prospect of civil disorder is more than dystopian imagination.

Of an estimated 300 million guns in the U.S., half of them are illegal. No one really knows how many are out there. Illegal handguns are likely to belong to shady characters of whatever race. Registering and disarming the rest of America won’t cure homicide, armed robbery, and gun-related mayhem — or even insane mass murders like Parkland.

Yes, the public’s arsenal has grown, and there’s a reason for it. In the last 50 years, the United States has become an outlaw culture, in which fewer and fewer people feel safe. Gun violence intersects with total family collapse, serious drugs, intense sexual rivalry, gang competition, and nihilism.

The March For Our Lives — like Black Lives Matter and the Women’s Pussy Hat March before it — is not about public policy or even social repair. It’s about triggering a new regime. Gun owners seek self-protection. If progressives pursue restriction and disarmament vigorously enough, law-abiding individuals will act to create protected safe havens where they and their children can feel secure.