The economy has been undergoing significant shocks in recent weeks, in spite of the historic tax cuts that the administration enacted at the end of last year. Presently, the markets have stabilized, but the situation is likely to remain volatile. The great question on everyone’s mind: Is another great economic calamity around the corner?

First, the Federal Reserve decided to raise interest rates beginning in March and will continue to raise rates. Second, Congress enacted a massive spending bill — thereby exacerbating the country’s onerous debt load. Third, the markets were being put into dysfunction with changes occurring in China: President Xi Jinping has waged a sustained assault on China’s financial market. Under the aegis of “reform,” the Chinese government has been punishing companies, such as An Bang Insurance, for taking irresponsible risks. Then, of course, President Xi was declared president-for-life in China. We mustn’t also forget the issues that have arisen with the volatility index (VIX). Lastly, the Trump administration has been rocked by a series of negative press — from rapid personnel shifts to sudden policy pronouncements, such as the recent decision to enact a 25 percent tariff on steel and a ten percent tariff on aluminum — which has caused a degree of dyspepsia among investors. Further, the stock market is overvalued, which normally indicates that a downturn is coming.

Several analysts insist that we might be in the midst of another bubble that is readying to pop. And, when it does, this bubble will be the mother of all bubbles. Proof of these concerns may reside in an odd place: total fertility rates.

In the last several weeks, studies have been released proving that there is a positive correlation between declining fertility rates in the United States and the arrival of a severe economic downturn. A study released by a group of professors from the University of Notre Dame in South Bend, Ind., shows how more than a year before a major economic downturn, American fertility rates begin to drop. A general decline in fertility rates has been an issue for several decades, although the most recent declination has occurred beginning around the year of 2016.

Of course, like all studies of this nature, there are some outliers. Yet, declines in total fertility rates over the course of several decades in the West have led to missed opportunities and stagnating growth. Generally speaking, as Adam Smith, the father of capitalism, theorized that, positive economic growth rates are associated with large, healthy populations. America’s growth rates have been anemic for some period of time (Europe and Japan’s growth rates are even worse).

As fertility rates across the world decline to historic lows, we should all expect to experience greater levels of income inequality, declines in the middle-class, stock market instability, and continued slow growth (relative to the historic norm). The Trump administration can — and should — fight to ameliorate as many of these issues as possible, but demography is destiny. In the last few months, the United States has reached its lowest fertility rate in history (62.00 births per 1,000 women in 2017). Clearly, Americans are opting out of making babies (which will have negative impacts on America’s economy).

It should be noted that older women began having more children during this phase. This was likely the result of socio-economic factors: after the Great Recession younger women at that point opted to delay family formation for economic reasons and, from a social standpoint, studies have proven that there is a positive correlation between a higher level of female education and lower levels of fertility. Yet, even with the increases in fertility rates among women nearing the end of their childbearing age, the overall decline in American fertility rates continued.

As these negative trends persist, coupled with the seismic shocks in the stock market, as well as the responses to increasing tariffs, and the debt bomb that is readying to implode, it is likely that the American economy is headed into an economic downturn within the next year. The Economic Intelligence Unit predicted in December of last year that 2019 would be the unfortunate year for that downturn. Bill Gates believes that a major economic downturn is going to happen in the near-future (even as both he and Warren Buffett believe that the economy will generally do well over many years). If these predictions are true, the record-setting decline in America’s fertility could, in fact, presage a recession in the same way that declining fertility foretold the 1976, 2000, and 2008 recessions. 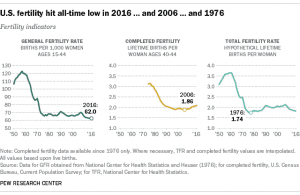 Of course, the economy is getting stronger: the tax cuts have goosed GDP growth, manufacturing is rebounding, demand for skilled workers is at stratospheric levels (compared to where we’ve been since the Great Recession), the stock market continues to do well, and consumer confidence remains high. Yet, around 2019 is when some of these longer-term negative trends will come about: during this period, the largest cohort of Baby Boomers is set to retire and begin pulling from Social Security, Medicaid, and Medicare; healthcare costs are expected to be at record-highs; and fertility rates will be depressed at even lower rates. And, should the Democrats make any significant gains in the 2018 midterms, I’d predict things to get still worse by 2019.

Policymakers should not discount the danger that perennially depressed fertility rates pose to the overall American economy. America’s present economic problems can only be overcome with a combination of spending reductions and massive, positive economic growth (in GDP terms). While we can increase the growth levels of the United States to around three-to-four percent, anything higher — which is needed in the long-run — will only be achieved with a large, healthy, and growing indigenous population. The real economic killer is low fertility rates, and low fertility rates can only be overcome with a far greater concentration on social policies than most Americans are willing to countenance.