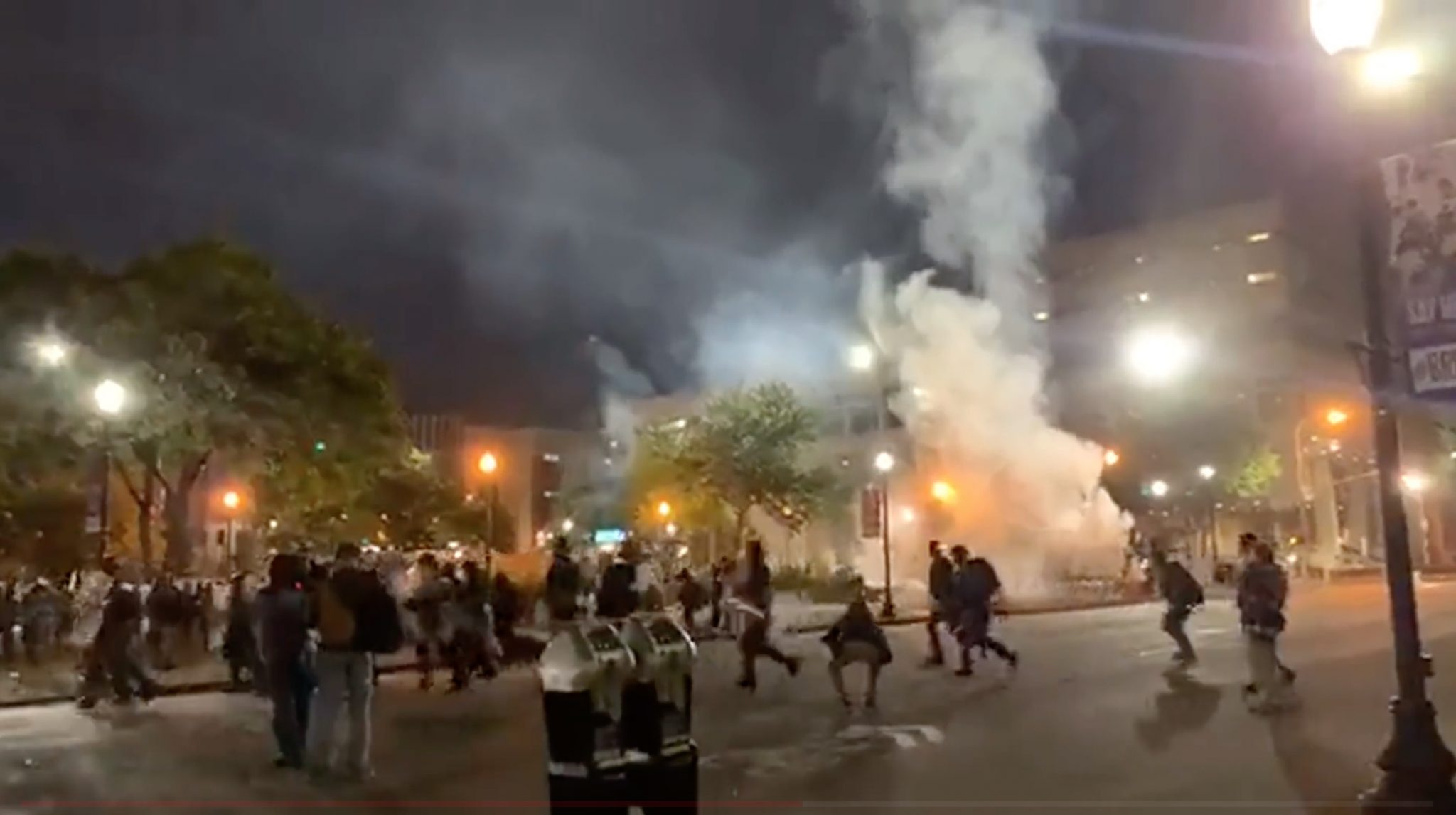 Organized hatred is a frightening thing to behold, and no one can blame Americans for being terrified by what happened Wednesday in Louisville. After it was announced that a grand jury had indicted only one of the police officers involved in the death of Breonna Taylor, an angry mob began shouting threats punctuated with obscenities. “We didn’t get it! Burn it down!” was one of the threats. Another voice in the protest mob was still more specific, shouting at police, “All y’all get ready to f***ing die!”

This is simply terrorism, and Democratic politicians like Joe Biden are complicit in this when they parrot BLM’s rhetoric about “systemic racism.”

There followed the inevitable confrontations between police and the “mostly peaceful” protesters, who engaged in vandalism and arson. By 8:30 p.m., Louisville police reported that one officer had been shot in a confusing scene on East Broadway near the Interstate 65 overpass. Subsequently, it was reported that two officers had been shot, which perhaps the Black Lives Matter (BLM) movement will consider adequate to satisfy their slogan of “Justice for Breonna.”

What this is about is not justice, but a primitive sense of vengeance. BLM rhetoric about “systemic racism,” amplified by the media and echoed by Joe Biden and other politicians, has inflamed hatred to the point where some people consider violent reprisals necessary to even the score. The deliberately radical tone of BLM pronouncements about the Taylor case (e.g., their repeated use of the word “murder”) was intended to produce such a violent reaction. Anyone who still believes that BLM is about peaceful protests simply hasn’t been paying attention.

There was never any rational justification for the rage that erupted in violence Wednesday. The facts of the Taylor case, which I described in detail in The American Spectator two months ago (“Who Is to Blame for the Death of Breonna Taylor?”), provided no support for claims of racist motivation. To summarize the case as briefly as possible: Louisville police were investigating Taylor’s ex-boyfriend, a drug dealer named Jamarcus Glover. He had listed her apartment as his mailing address; detectives saw him visit her apartment several times, and believed Glover had stashed drugs and/or money at Taylor’s apartment. On the night of March 13, police executed search warrants on three addresses in Louisville, including the so-called “trap house” on Elliott Avenue where Glover conducted his retail drug traffic, and Taylor’s apartment 10 miles away on Springfield Drive. Glover was arrested at the Elliott Avenue address. When police raided Taylor’s apartment, however, they did not realize she had her new boyfriend, Kenneth Walker, spending the night. Walker, who understandably feared Glover, had legally armed himself with a pistol. Although police had a so-called “no-knock” warrant, they actually did knock on the door and announce themselves as police, but when no one answered, Police Sgt. Jonathan Mattingly ordered officers to use a battering ram to break down the door:

The next thing that happened, in Walker’s description of the incident, is the door “comes off its hinges” — the police are busting in, but he doesn’t know it’s the police. If you’re dating a drug dealer’s ex-girlfriend and somebody busts through your door at 12:30 in the morning, what do you do?

Walker fired a shot, hitting Sgt. Mattingly in the thigh, and Sgt. Mattingly immediately returned fire, getting off six shots. Two other officers also opened fire. In total, police fired at least 22 shots, none of which hit Walker, but Taylor was struck eight times and died on the scene. Although a grand jury indicted Walker on a charge of attempted murder of a police officer, that charge was dismissed in May at the request of Commonwealth’s Attorney Tom Wine.

[In June], Louisville Police Chief Robert Schroeder announced the firing of Officer Brett Hankison, who he said “blindly” shot 10 rounds into Taylor’s apartment through “a patio door and window which were covered with material that completely prevented you from verifying any person as an immediate threat or more importantly any innocent persons present.” The department has placed Detective [Joshua] Jaynes, Sgt. Mattingly, and Officer Myles Cosgrove, who also fired shots during the incident, on “administrative reassignment.”

This was all a tragic miscalculation. No drugs or money were found in Taylor’s apartment, but there was probable cause for the warrant and, once Walker fired the shot that wounded Sgt. Mattingly, officers were legally justified in returning fire. That was the finding of the Louisville grand jury on Wednesday, which indicted Hankison on three felony charges of reckless endangerment, but made no charges against either of the other two officers who fired their weapon that night.

Last week, the city of Louisville announced it would pay $12 million to settle a wrongful death lawsuit brought by Taylor’s family. Yet this was not enough to satisfy the BLM radicals who repeatedly accused police of murder and engaged in irresponsible rhetoric about racism. Even last night, after two Louisville police officers were shot, CNN was still giving airtime to lawyer Ben Crump, who repeated the false accusation that Taylor was a victim of “murder” while ranting about the Louisville grand jury’s alleged “disrespect” of black women.

An attorney ought to know that the word murder has a legal definition involving “malice aforethought.” Police officers executing a search warrant cannot be accused of such malice when, without warning, they are fired upon by someone inside the residence. In such a case, returning fire is simple self-defense. Officer Hankison was charged with reckless endangerment because of the specific way in which he reacted, but Sgt. Mattingly and Officer Cosgrove both acted in accordance with the policy and training of the Louisville Metropolitan Police Department. For Crump to describe these officers’ actions as “murder” is libelous, to say nothing of the irresponsibility involved in inflaming racial hatred.

BLM has issued “demands” that Louisville disarm and defund its police department, with the implied threat of mob violence if their demands aren’t met. This is simply terrorism, and Democratic politicians like Joe Biden are complicit in this when they parrot BLM’s rhetoric about “systemic racism.” Earlier this month, Biden said that the officers involved in the Taylor shooting “need to be charged,” but after the Wednesday grand jury decision, Biden’s campaign issued a statement questioning “whether justice could be equally applied in America,” speaking of a need “to do more to deliver justice for Breonna.” Biden’s statement went on to declare, “We know what is necessary. We need to start by addressing the use of excessive force, banning chokeholds, and overhauling no-knock warrants.” All of these issues are already being addressed at a local level by police departments nationwide, but no department so far has prohibited officers from returning fire when somebody starts shooting at them, which is what happened to the cops when they raided Breonna Taylor’s apartment.

The simple facts of the Taylor case disappear in Biden’s vague emotional blather (“we mourn with her mother, family, and community”), as if the problems of crime and drugs plaguing black America could be solved with gushy sentiments plucked from a Hallmark greeting card. Last night, a source sent me transcripts of Jamarcus Glover’s jailhouse phone calls, and, without going into details, just trust me when I say that the sentiments Jamarcus expressed about his ex-girlfriend weren’t suitable for a Hallmark card. It was her association with Glover that most directly resulted in Breonna Taylor’s death, but none of the politicians or TV pundits seem interested in talking about Jamarcus Glover. That silence is significant; suppressing knowledge about why police raided Taylor’s apartment is necessary to the BLM project of smearing Louisville cops as racist murderers.

Two of those cops were shot Wednesday night, but neither of their injuries were reported to be life-threatening. The bloodthirsty mob’s demand for vengeance — simple eye-for-an-eye reprisal motivated by crude ideas of “racial injustice” — was perhaps not satiated by this violence. We can only pray that rule of law will yet prevail over the anarchist madness that threatens to destroy our civilization.