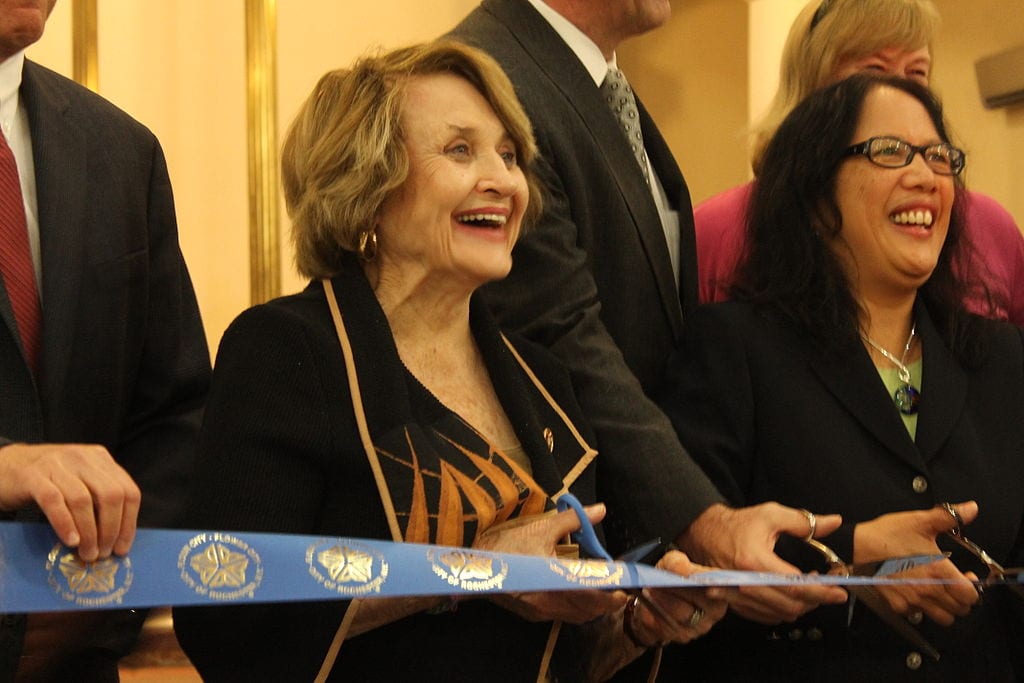 This past week, I lost my member of Congress. From January 1987 to March 2018, she cast 18,230 votes. While I disagreed with her most of the time, in times like these, it is important put aside any differences and focus on the good she did for Rochester, New York and this country.

I first met her in 1987 when my father was trying to get his brother and family out of the Soviet Union. The cause to free Jews from Soviet Union was one of the very few bipartisan causes in Congress.

My parents, and other Soviet Jews in the Rochester area got to work with many New York politicians in both parties, including Governor Mario Cuomo, Senator Daniel Patrick Moynihan, Senator Al D’Amato and Congresswoman Louise Slaughter.

While many of tributes to her have focused on how she was “trailblazer” for women, in part because she was the first woman to chair the powerful Rules Committee, I think she’d prefer to be remembered for what I believe was her greatest achievement in Congress.

She was the original co-sponsor of the Stop Trading on Congressional Knowledge (STOCK) Act. In 2012, Congresswoman Slaughter went on The Daily Show. She told host Jon Stewart that she originally got involved with the STOCK Act in 2006 because she learned that a staffer for Tom DeLay was engaged in day trading while working in Congress.

On March 28, 2006, Rep. Brian Baird (D-WA) and Rep. Louise Slaughter (D-NY) introduced the bill to prohibit members of Congress and their staffs from insider trading. This bill had one sponsor and 14 co-sponsors in 2006 (13 Democrats and two Republicans).

This bill was reintroduced in every Congress. Without the help of Peter Schweitzer’s 2011 book, Throw Them All Out, it wouldn’t have passed. The book provided numerous examples of how members of Congress in both parties benefited from insider trading.

Then on November 14, its number of co-sponsors doubled in a day. The night before, Peter Schweitzer had been 60 Minutes to promote his book. By February 2012, the STOCK Act had 286 co-sponsors (187 Democrats and 99 Republicans).

Schweitzer’s book provided numerous examples of corruption. For example, on September 18, 2008, Secretary of the Treasury Hank Paulson and Federal Reserve Chairman Ben Bernanke briefed members of Congress in Nancy Pelosi’s office. They both argued that Congress needed to take swift action to avert a significant downturn to the American economy. The next day, former Republican Congressman Spencer Bachus decided to “short” the market and quickly made a profit of $5,715 dollars.

If they ever want to make a sequel to the 2015 movie The Big Short, they could base the story on several Congressmen and Senators who benefited from insider information. For example, Senator Dick Durbin (D-IL) was in a meeting with Secretary Paulson and Chairman Bernanke on September 16, 2008. A day later, Schweizer reports in his book, Durbin sold $73,715 in shares.

Durbin joined his fellow legislators in another meeting with Paulson and Bernanke on September 18, 2008. The next day, Durbin sold another $40,000 in stocks.

Then Rep. Shelly Moore Capito (R-WV) and her husband sold at least $100,000 of Citigroup stock. When the banks were falling apart in September, it was logical to sell. When a bailout became likely, members of Congress wanted to buy back bank stocks.

Then-Senator John Kerry (D-MA) bought $550,000 in Citigroup stock in the early part of October 2008. This was before October 28, 2008, when the federal government announced the bank would receive $25 billion in TARP money.

Besides insider trading, members of Congress have used other methods to amass large personal fortunes. For example, disgraced former Speaker of the House Dennis Hastert (R-IL) used land speculation. From 1987 to 2006, Hastert’s net worth increased from $290,000 to over $6 million. As late as 2002, his fortune was estimated at between $1.2 million and $1.5 million.

Hastert invested $1.3 million in Illinois farmland. He used his position as Speaker and proposed earmark to make sure that the Prairie Highway route would come very close to the land that he just bought. This earmark cost the taxpayers $207 million. It also increased the value of the property considerably. Hastert sold the land for a profit of $1.8 million dollars only two years later.

Former Speaker of the House Nancy Pelosi (D-CA) also increased her fortune in Congress. According to Pelosi’s disclosure forms, in just one year, her net worth increased by 62 percent from $21.7 million in 2009 to $35.2 million in 2010.

Almost six years after the STOCK Act was passed, politicians are still making fortunes by selling access. The day after her death, New York Senators Charles Schumer and Kirsten Gillibrand called for the Amtrak station in Rochester to be renamed after Louise Slaughter. I think a better way to honor Louise Slaughter’s memory would be to complete the work she started with the STOCK Act and continue to expose politicians who make money through insider trading and selling access. This would require routinely updating the STOCK Act and other laws to stay one step ahead of corrupt lawmakers.

Before voters go to the polls in November, every polling station in the country should give them a list with two sets of numbers: the first is the net worth of every Senator and House member on the day they entered office and the second their present net worth. That would make for a very entertaining election night.