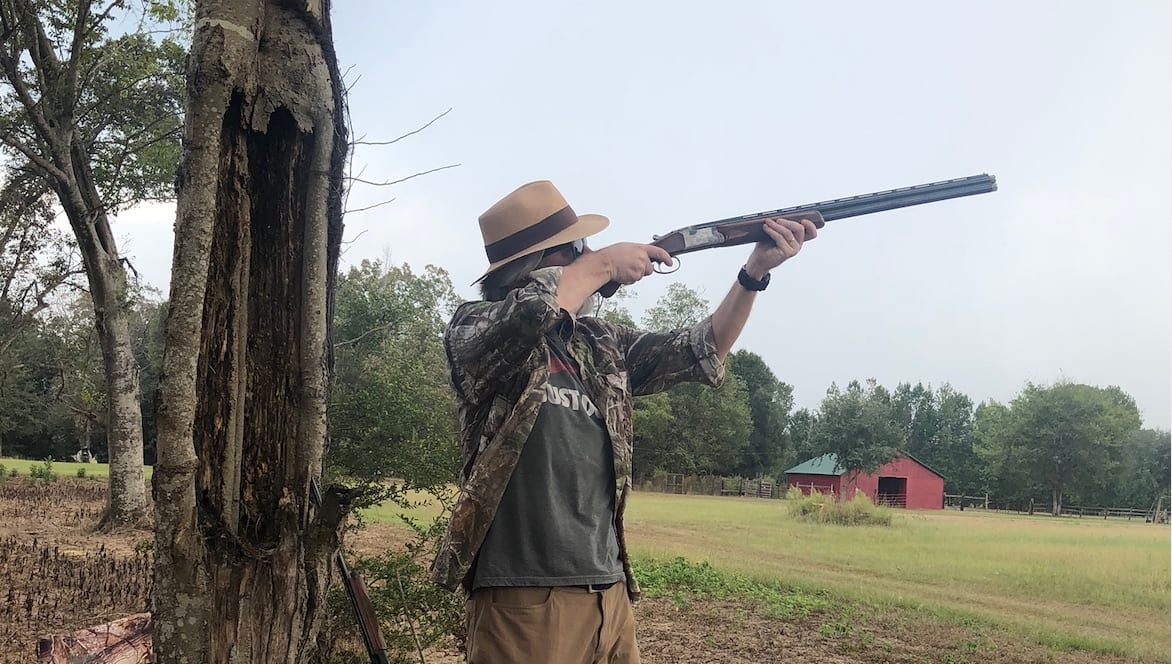 It was a beautiful Saturday only a couple of weeks ago, and I sat in a foldable camouflage chair, 12 gauge over/under shotgun in hand, beneath the sparse cover of a pine tree. My host, a dozen yards away, sat uncomfortably on a bucket turned over for that purpose, his gun propped on his knee and his eyes, like those of his dog Lucy, vigilant for any sign of movement in the field before us. Another five or six men were scattered along a dirt road just out of sight. We were reminded of their presence by the intermittent echoes of shotgun blasts.

This is dove hunting.

With each downed bird, Lucy, a retriever, sprinted forward into the tall grass to find our quarry and bring it back, dropping it at our feet. We had no idea how the other men were making out, but our bird count was piling up after only a couple of hours. With darkness approaching, we loaded our guns, dead birds, ammunition, and, of course, Lucy, into a battered UTV and headed back to the cabin where venison burgers, the product of a hunt last winter, were being cooked on an enormous grill.

Outings like this are about much more than the actual hunting. Most of the men on this particular trip were there for the fellowship as much as anything else. Oh, there is always that hardcore hunter who will sit out alone for hours on end in the hope of getting that first or last bird, but most are there to do the kinds of things men do when they are with other men and there are no women around. On this occasion, that meant watching football, drinking beer, smoking cigars, telling off-color jokes and stories, eating too much, and engaging in good-natured banter.

Some wives reading this will say, “My husband does all of that whether he is with other men or not! And he cusses, too!” Perhaps. But it takes on a different character in a womanless, testosterone-infused environment. Other wives are conjuring a Lord of the Flies-like image of a bunch of naked men dancing around a pig’s head. That is not quite what I mean. Well, not entirely.

Cholesterol aside, what I’m talking about is not altogether unhealthy. Men need the fellowship of other men. The excitement of the boy going to summer camp returns in the man if only for a weekend or two each autumn when men throw off the suits and ties and don camo, exchange the briefcases for a shotgun or rifle, escape suburban life and “Honey Do” lists, and trek deep into the forest to hunt and gather and generally feel, well, manly.

So confused is Western culture at present that it feels like you’re not allowed to think that anymore, much less say it. Differences between the sexes — which are real, purposeful, and God-ordained — are being annihilated as heretofore unheard of genders are being invented and introduced with startling rapidity, and thus masculinity is “toxic” and simply has to be suppressed. Masculinity is a product of nurture, not nature, or so the argument goes anyway. This, as any sensible parent of a boy will tell you, is sheer nonsense.

When I was a child and my father was overseas putting his toxicity to work killing America’s enemies, my mother decided that it wasn’t good for her two boys to be raised by their mother alone in military housing that was dominated by women in similar circumstances. She knew that we needed the influence of a man in addition to that of women. She would often joke, “You boys need to go outside, find something, and kill it.” So my uncle was tasked with the job of seeing to it that we were given an outlet for our boyish interests.

The social engineers of the cultural Left will wince at my mother’s (somewhat serious) joke and her (very) serious parental approach. Masculinity, they allege, gave us world wars, Donald Trump, and Duke Lacrosse. Oops. Scratch that last one. But then again, maybe not. Innocence, as in the case of those wrongfully accused boys, gets you nothing with these people. If you fit the predetermined narrative, you’re guilty.

And what, exactly, is the narrative?

Earlier this year, the American Psychological Association classified traditional masculinity as a disorder. According to their report,

In the past 30 years, researchers and theorists have placed greater emphasis on ecological and sociological factors influencing the psychology of boys and men.… For instance, socialization for conforming to traditional masculinity ideology has been shown to limit males’ psychological development, constrain their behavior, result in gender role strain and gender role conflict, and negatively influence mental health and physical health.

In other words, when boys or men reveal some sort of dysfunction, it’s traditional masculinity that is to blame. The inference of all of this psychobabble is that boys need to be more like their female counterparts, so a generation ago the social engineers began pumping boys with Ritalin, removing “violent” sports like dodgeball from physical education programs, and generally — and very consciously — feminizing school curriculums.

But it’s not just schools where masculinity is under assault. It is in our churches, too. “Walk into the average evangelical church in America,” one observer writes, “and you will likely sing lyrics such as ‘I want my life to be a love song for you, Jesus’ and ‘I want to fall in love with you.’ Then you might hear a sermon encouraging Christians to be ‘intimate’ with Jesus and attend a ‘care group’ where everyone is expected to share their feelings.”

In his 2015 bestselling book Why Men Hate Going to Church, David Murrow argues that the exodus of men from the church is an epidemic, with women now making up 61 percent of congregations. His argument is hard to refute. Women, he says, thrive when secure; men thrive when challenged. The modern church is about providing safety, making frequent use of the language of the safe and unchallenging: “shelter,” “refuge,” “comfort,” “nurturing,” and “retreat.”

“Churches,” says Christian author Nancy Pearcey, “should engage men’s intellects to help them see the relevance of Christianity to the ‘real’ world of politics, industry, and business. The more traditionally masculine side of Christianity enjoys crossing swords with hostile secular worldviews. So, as long as Christianity appeals [solely] to the emotional, therapeutic, interpersonal, relational areas, it’s not going to appeal to men as much as to women.”

That the modern church emphasizes Jesus’ gentler teachings hardly needs additional commentary here. But there is a corollary: traditional male attributes like adventure, risk, aggressiveness, a willingness to fight and defend something, courage, competition, achievement, and performance are seldom encouraged or welcomed. Worse, these attributes are often deemed sinful.

One might have thought that Christians, of all people, would know from their own theological teachings that the capacity for evil is neither exacerbated nor diminished by one’s sex. If masculinity can become an exaggerated version of itself and therefore a societal hazard — and it can — it’s naïve to conclude that femininity doesn’t have its own toxic expressions. Consider Europol’s 21 Most Wanted Criminals list. Revealed last Friday, the list is part of a campaign called “Crime has no gender” and includes 18 women and three men. I’m reminded of a remark William Golding made when asked to summarize the point of his aforementioned book The Lord of the Flies: “The problems of human society are the problems of human nature.”

Men are looking for a safe space within society to be men. This doesn’t mean obnoxious Neanderthals or those who brutalize women. It simply means a place where masculinity is not deemed a criminal offense, a mental disorder, or unnatural behavior. There’s something ironic about the fact that on this particular October Saturday these men should find it hunting a bird that is the biblical symbol of peace. Indeed, if Jesus had been baptized in our midst (Luke 3:22), the descending dove would have hit the ground with a thud, buckshot would have outweighed the meager flesh of the now-featherless bird, and an argument would have ensued about who should get the credit for the kill. The recollection of this passage of Scripture gave me a pang of conscience as I considered my own toxic masculinity.

But not for long.

Given that there is no taxonomic difference between pigeons and doves, I’ve decided that henceforth my dove hunting shall be called pigeon hunting. Problem solved.