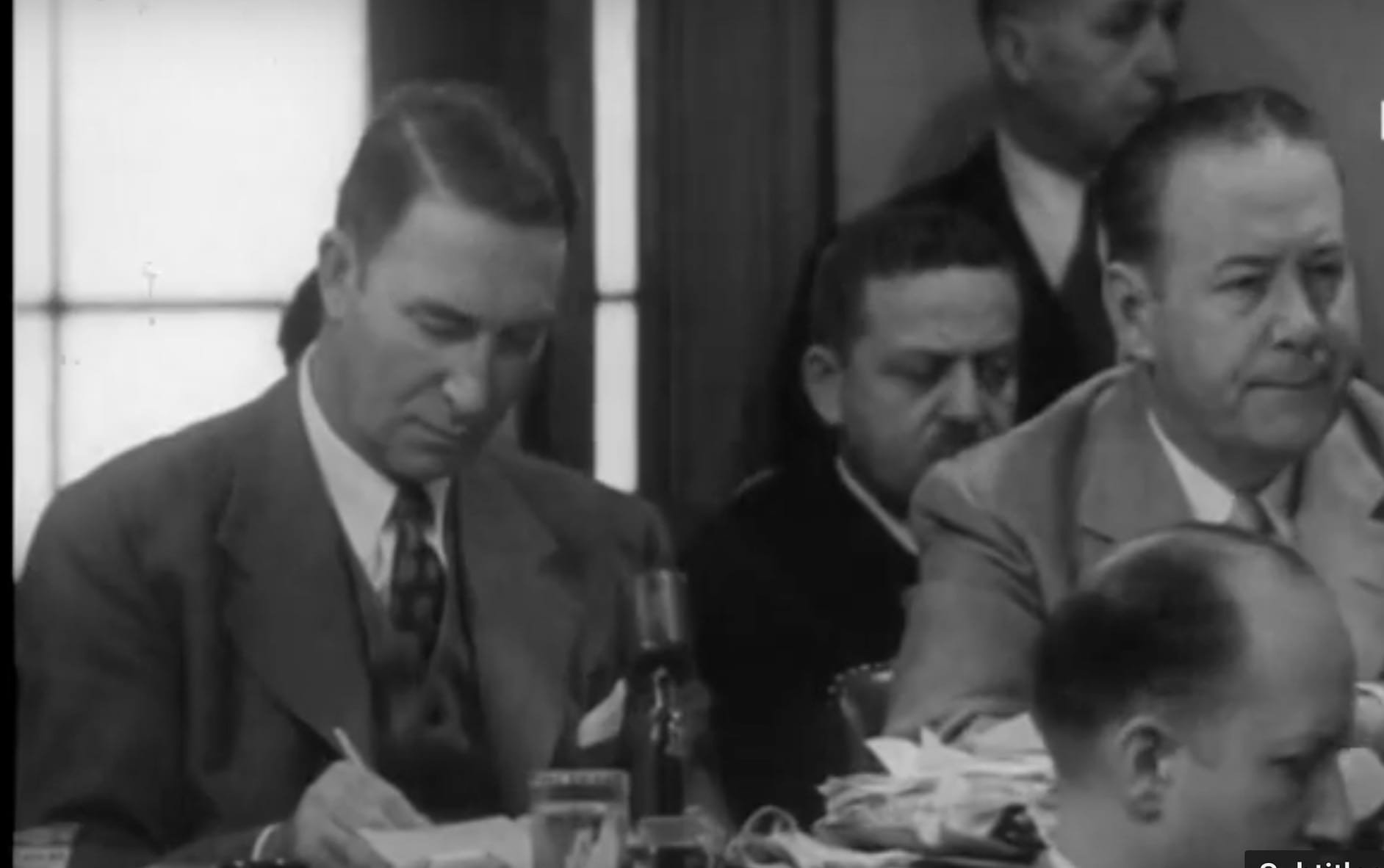 Racketeering is a multifarious concept, but when the word was coined in 1927 by the Employers Association of Chicago, it referred specifically to tradesmen who had banded together to artificially drive up the cost of their services.

The employers group wanted the authorities to crack down on crooked laundry and building trades, among others, but in the long run, the trades won by subverting and perverting the power of the government.

It’s easy enough to picture the old noir films with cops on the take, doing the mob’s bidding, but this corruption was of a less glamorous, more insidious sort. I refer to licensing, the mechanism by which the government lends the full pain of law to restricting commerce by some parties, while giving a literal seal of approval to the competition.

This is more than the emphatic picking of winners and losers. It’s racketeering. The only reason we don’t recognize it as such is that we still fall for the old pretext that it’s being done in the public interest. And no matter how corrupt the arrangement, our courts almost always side with the racketeers.

“Today, more Americans than ever must get a government permission slip before they can earn an honest living, thanks to the spread of occupational licensing laws,” write the authors of a new report by the Institute for Justice, a group of libertarian lawyers that challenge the nanny state. In the 1950s, one in 20 Americans needed a license to do their jobs; now the number is closer to one in four.

“Licensing laws now guard entry into hundreds of occupations, including jobs that offer upward mobility to those of modest means, such as cosmetologist, auctioneer, athletic trainer and landscape contractor,” the report states. “Yet research provides scant evidence that licensing does what it is supposed to do — raise the quality of services and protect consumers. Instead, licensing laws often protect those who already have licenses from competition, keeping newcomers out and prices high.”

It just takes a few minutes reviewing the massive discrepancies in licensing to come to the same conclusion as Don Willett, the Texas jurist that President Trump just appointed to the federal bench — they’re “patently bizarre.” A landscaper’s license that requires four years in one state doesn’t require a license at all in 40 others. An eyebrow threader might need 10 times the classroom instruction as a paramedic. The great majority of the occupations licensed also happen to be practiced freely in a dozen or more states, suggesting there’s little need for the certification.

The report names some of the fields where licensing is most clearly unnecessary. “A short list would include auctioneer, florist, funeral attendant, home entertainment installer, interior designer, locksmith, tree trimmer and upholsterer. Most of these occupations are licensed by only a handful of states: funeral attendants by three, tree trimmers by seven and locksmiths by 14.”

In a deadpan observation, the authors note that “it is highly unlikely that trees in those states — or the tasks required to trim them — are any more complex or dangerous than those in the other 44 that require no license.”

In those few areas where the public might truly benefit from some sort of review board, there are usually less restrictive alternatives to licensing: private review boards and ratings websites, certification, bonding, insurance, inspections and registration. These all help the consumer without shutting people out of work.

The report traces the origins of licensing to basic economic protectionism. It was Adam Smith who observed in 1776 that the trades would conspire to reduce the availability of skilled craftspeople, in order to raise wages.

Over the last century, the report finds, most licensing has come from industry, not consumers, in order to enhance prestige and choke off competition. The American Dietetic Association called for licensing dietitians and nutritionists back in the 1930s and 40s, writing, “For the protection of the profession, the term dietitian should be legally defined and state registration of dietitians required,” according to the report. “Today, almost every state regulates dietitians and nutritionists, either through licensure, certification or a restriction on the use of the title ‘dietitian’ or the letters ‘RD’ (which stand for ‘registered dietitian).”

Two states even require licenses for dietetic technicians, because, one presumes, the officially licensed food recommenders apparently still lack the competence to hire their food recommender helpers without the government’s supervision.

The American Society of Interior Designers has spent decades lobbying state legislatures to restrict who can call themselves by that name. In three states and D.C. it has even managed to procure a licensing racket. Out of 102 occupations examined, the report found that interior designed had become the most difficult field to enter. De gustibus, it turns out, there is indeed quite a bit to be disputandum.

The consequences of even reasonable-sounding regulations can be devastating. The Austin American-Statesman, for example, recently reported on a locksmith who was forced to close his business of 30 years over a conviction from 1980.

The problem for reformers is that for around a century now, the courts have treated economic liberty with contempt, deciding in almost every case that the government’s interest in regulating economic affairs — even when that interest is merely hypothetical or even demonstrably irrational — supersedes the individual’s interest in making a living. The Institute for Justice is one of the leading forces in changing that dynamic.

The report comes at an opportune time, as President Trump’s designee to chair the Federal Trade Commission, Maureen K. Ohlhausen, is an advocate for economic liberty in this area. In fact, Ohlhausen wrote the forward for this report.

Thanks to Ohlhausen and her colleagues at the FTC, the Supreme Court recently trimmed back some of the overreach from regulatory bodies. In North Carolina, the State Board of Dental Examiners, which is composed almost exclusively of dentists, had gone to war with teeth whitening businesses, who were offering service at a far lower price.

The FTC argued that the dentists were trying to suppress competition, while the dentistry board argued state immunity — usually a winner in this sort of thing. For the racketeers, this was an even better arrangement than having crooked cops in their pocket. Now they actually had badges, of a sort.

But the Supreme Court saw through the scheme and decided in 2015 that boards composed of market participants may be subject to antitrust liability unless the state exercises “active supervision” over them.

It will always be easy for lawmakers to join in combination with business cartels so long as the costs are diffuse, and borne by customers and future competitors. The cost is measured in lost opportunity, which doesn’t get a vote. The scale of those lost opportunities, however, is enormous — some 2.85 million jobs a year, according to this report.

To stop it, the first step is to question the legitimacy of government regulation. That’s what IJ does. And that’s just what the conservatives on the Supreme Court usually resist doing, as indeed, three of them did in this case.

Justices Thomas, Alito, and Scalia all thought the questions of state regulatory authority had been resolved decades ago, when the Supreme Court first validated FDR’s vast expansion of federal power under the Commerce clause. Their arguments are sound, as is the wisdom in general of not upsetting long-established law. But if there’s one area of settled law that badly needs revisiting, it’s this one. If this country is going to survive the weight of its debts, if it is going to grow enough to have a future at all, it needs a legal framework for economic issues that does more than simply validate and augment government power.

The conservatives warned that this case would lead the courts into a morass. They’re right, in a sense. For the better part of a century, our courts have adhered to an idea of economic liberty that’s simple, workable and dead wrong. They’ve decided that for all practical purposes, it doesn’t exist.

One way you start recovering that lost ground is to make the states defend the absurdities of occupational licensing. Find the most absurd, abusive, and corrupt uses of regulatory power, and challenge them.

So hey, North Dakota, if 34 states license unarmed security guards, and 33 of them require no more than a week or two of time lost to training and compliance, how is it that you require 244 days of your guards? Is that really how much time it takes to figure out how to drive that little cart around the parking lot?