Main Street U.S.A.,Top Story Justice,Liberty With Liberty and Justice for All - The American Spectator | USA News and Politics
Menu
Main Street U.S.A.
With Liberty and Justice for All
“Barry and Harry” defended those principles valiantly 60 years ago, in words that ring just as true today.
by William Murchison
Barry Goldwater and Lyndon B. Johnson, Jan. 1964 (Yoichi Okamoto, LBJ Library/Wikimedia Commons) 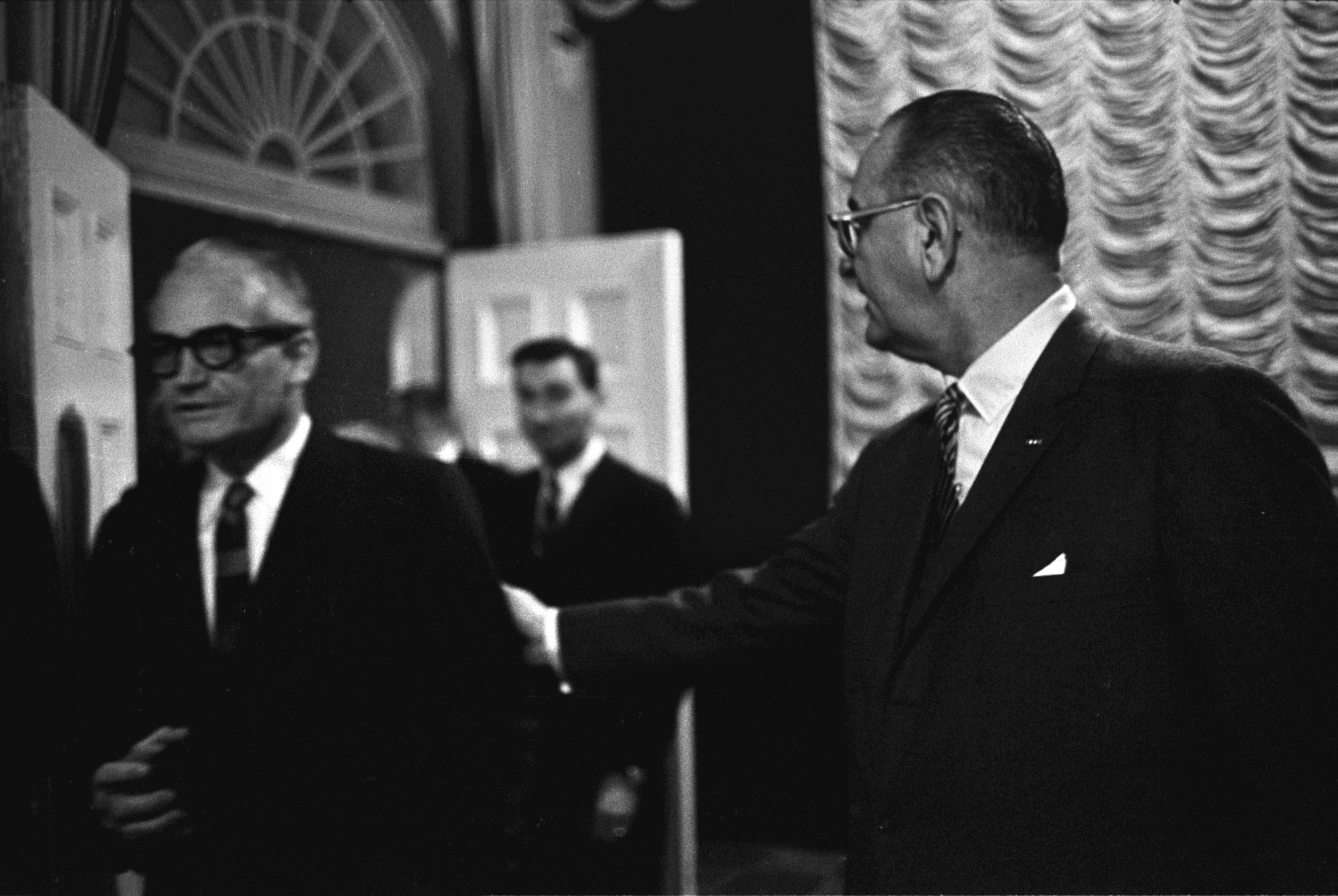 “I would remind you that extremism in the defense of liberty is no vice. And let me remind you also that moderation in the pursuit of justice is no virtue.”

Barry Morris Goldwater, may God rest his freedom-loving soul, spoke these celebrated words in accepting the Republican nomination for president in 1964. But the author of the phrase was a brilliant political scientist named Harry V. Jaffa, whose death, at 96, put the obituarists instantly in mind of a rhetorical flight from which Goldwater supposedly never recovered.

The two — Barry and Harry — knew with some exactitude what they were doing. As William J. Middendorf, a ring leader of the Draft Goldwater movement, would later note, Goldwater was taking on “the major theme of the (GOP) opposition debate: that he and his supporters were ‘extremists’ and the Rockefellers and Scrantons of the party were the voices of ‘moderation.’ ”

But this isn’t about Barry — for whom I proudly cast my first-ever presidential vote. This is about liberty and justice, in the light of Harry Jaffa’s riff on the topic — a riff (through Barry) so unapologetically stated as to throw into the shade Jaffa’s lifetime achievement as an interpreter of Abraham Lincoln.

Liberty and justice, 60 years after the no-vice, no-virtue speech, might be said to require at least as robust an endorsement as Barry and Harry accorded them. We find them besieged on all sides — by Islamic wackos; by IRS workers leaning on nonprofit conservative organizations; by the steamroller congressional tactics used in establishing Obamacare; by universities so much in love, supposedly, with free speech that they protect it by denying students its use.

The media and the Lyndon Johnson Democrats jumped on Goldwater for grossly, as they allowed, overstating his case. Was he — so runs the question before us today — overstating matters or merely anticipating what lay ahead as government began construing its routine duties as crowding aside the private sector, redistributing income, advising Americans on how and what to eat, etc.?

The shift in mission came, actually, with the landslide election in 1964 of Goldwater’s Democratic opponent, Lyndon Johnson, who had decided it was time — ready or not, here we come! — to build a Great Society.

Government impositions on liberty, and the justice that liberty underwrites, were slight in 1964 by comparison with those still to come. Always the calculus is complex; at the start it can mislead. Take an issue from the ’60s. Federal attacks on the claimed liberty to prevent blacks from voting brought new life and understanding to old ideas about equal justice under law. The Constitution required no less.

Thus: How much liberty is enough? How much is too much? When is America — let us say — itself? You can’t always tell. You get hints anyway of how the public feels from what the public does. To wit: The Clint Eastwood movie Sniper earned $64.4 million at the box office for a total of $200 million in two weeks — a record for the period. Eastwood’s bio of U.S. Navy SEAL sniper Chris Kyle affirms a number of virtues — sacrifice, love of country, adherence to duty — that neatly align with, and serve the ends of, liberty and justice.

Sometimes, as all of us know, you go to the movies to see what you don’t see in the life around you. Indicators of this sort bear witness to mainstream discontents of a sort the Goldwater campaign merely sniffed at, pungent as the odors of the moment certainly were.

Harder and harder it gets to argue with Goldwater’s and Jaffa’s words — likely, the most calumniated words ever spoken in modern presidential politics; a bit more on the mark, at that, than a prophecy from a few elections ago — something about, come on over and watch the oceans stop rising and the planet start to heal.

William Murchison is writing a book on moral reconstruction in the 21st century. His latest book is The Cost of Liberty: The Life of John Dickinson. To find out more about William Murchison, and to see features by other Creators Syndicate writers and cartoonists, visit the Creators Syndicate website at www.creators.com.
COPYRIGHT 2020 CREATORS.COM