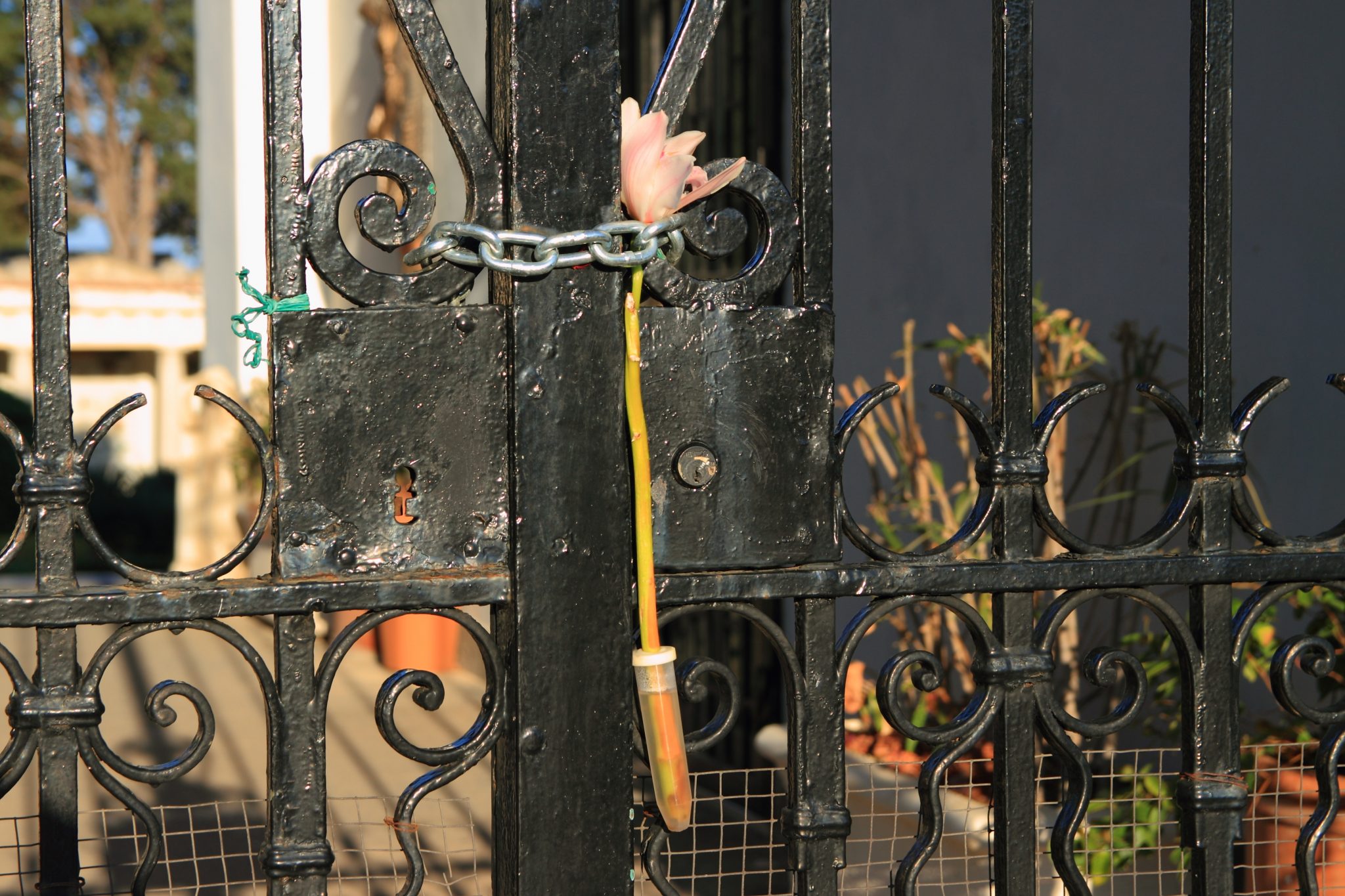 Sixteen years ago (May 7), my father passed away from Parkinson’s Disease and each year, my stepmother and I place flowers on his headstone as a memorial.

Today, I tried to deliver a handful of home-grown (organic) Mountain Marigolds (tagetti lemmoni). At the entrance to the Santa Barbara Cemetery there were several “signs” prohibiting any flowers or memorial items being left anywhere inside the cemetery.

When I got home I called the Santa Barbara Cemetery Association and spoke with an employee, who explained that they had receive a notice/letter/proclamation from the California Department of Public Health to ” … keep your employees safe … “

This SBCA policy was adopted because they “didn’t want their employees to die” and that requiring their groundskeepers to pick up flowers or bouquets was a risky proposition. I ask if it mattered that most of the flowers have been sitting in the sun soaking up UV rays, and she said, “We still don’t know how the virus is spread, so isn’t it better that we err on the side of safety ... “?

(I thought the CDC had determined that COVID-19 was spread by uncovered breath, spewed speech, drooling, belly laughs and mouth fondling?)

I suggested that maybe their employees, if they fear for their lives, should stay home or have them wear masks and gloves. She replied abruptly that “We have funerals to attend to … our employees DO WEAR GLOVES … and  we are temporarily keeping our gates open as a courtesy … but if people start leaving flowers, we will lock our gates.“

I thanked her for her information. I don’t plan to use her comments to write a book or become a Whistleblower for the Dead. If someone from Project Veritas or an Adam Schiff sub-committee were to send me their private mailing address, I could send them photos and include more lurid details, provided they offer me immunity … from prosecution, not COVID-19.

If someone reading this would be interested in conducting their own investigation, gather evidence and perhaps make high-quality clandestine recordings I’d be glad to offer my services. This is clearly an example of the “IF-IT-SAVES-ONE-LIFE” theory on steroids and needs to be exposed.

I would like to discourage American Spectator readers from getting involved with FDOM (Felony Distribution of Marigolds), trans-species sexual deviation (placing your nose into the reproductive organs of another species — aka “sniffing” a rose) or exhaling unless absolutely necessary. Kids start off on marigolds and end up on heroin.

The left-wing political hack Osterholm cloaks his fantasy projections as epidemiological expertise. He, months ago, without knowledge, pop-culture asserted the coronavirus would be twenty to thirty times worse than the worst flu season (1.2–1.8 million deaths). He is the likely source of Governor Walz’s crackpot prediction of 74,000 deaths in Minnesota alone.

On “A Time to Hate,” by Dov Fischer

Dov Fischer’s article “A Time to Hate” was a masterful piece of journalism and so eloquently written. I feel and share his pain. Tell him for me that G-d will not let the wicked go unpunished. He is in charge. I sense that there will indeed be some earthly justice, but we must be patient while Barr and Durham develop their air tight cases.  Please give Dov my prayers and blessings.

I appreciated the article “A Time to Hate.” It so clearly expressed the same things I thought about the last president and the difference between how people of one political party do wrong and never get caught. The “now we are going to get them” song was one sung by my family, but I told them not to hold your breath. I told them they would do nothing to them because they were Democrats. If it was a Republican, they would go to prison, but not a Democrat. The only thing missed was the willful killing of the preborn-up until birth, and selling baby body parts, which we end up paying for. The whole world is upside down and a virus is being used politically, too, to trace, chip and track the whole world. Read article that said 100K died in USA in the 1960s of Hong Kong flu. The world lost a million. Now houses of worship around the world are shut down for the first time in history. We have told God to get out of our lives, schools and government. I think he did get out just like we told him. He is waiting for us to ask Him back into us world. I’m praying. I’m asking. Ultimately, the devil is behind the lies and the deceit. In the end, He doesn’t win. Love wins. Thank you for the recap — and take heart. Love wins in the end!

I generally enjoy your daily missives and musings. However, I must call you out on Monday’s “Fleeing =/= Jogging.”

As a lifelong Georgia Caucasian male, I can say from experience (both doing and observing) that many people often stop and check out new home buildings under construction in their own or nearby neighborhoods without having any sense of “doing what they are not supposed to be doing,” other than assuaging their own curiosity regarding the new structure. Perhaps wanting to compare its layout to their own home? This is indeed a common occurrence in the South that I know and does not connote “being up to something” per se.

In the video showing a black man (presumably Mr. Arbery) stopping and going into the building for four minutes, it does in fact appear that he had stopped during a “jog” prior to entering said building. While we do not (nor may we ever) know what was going through Mr. Arbery’s mind at that time, he is surely entitled to at least the presumption of innocence until proven guilty of something untoward at that property.

I would take exception to your unsubstantiated imputation of “guilt” in this matter before all the facts have become public. Do not imitate the example of the mainstream media in other cases dear to conservatives.

Read your wonderful article on Little Richard. I remember him well. As a high school junior, my parents bought the first stereo on our block. The first record I played on it was Little Richard’s first LP. My high school friends loved it. The classic Hollywood film, The Girl Can’t Help It, featuring a bevy of early rock ’n’ roll greats: Fats Domino and Gene Vincent and the Blue Caps among others, opened with a jukebox clicking on and playing, “The Girl Can’t Help It,” with Jayne Mansfield struttin’ her stuff down main street while milk bottles exploded and cat hairs stood on end. Later in the early sixties at a concert he gave in Britain, the film of that concert clearly shows the Beatles in the audience, loving and cheering on every moment of Richard and his music. I hope people will stop for a moment and say a prayer for him. He was a great American.