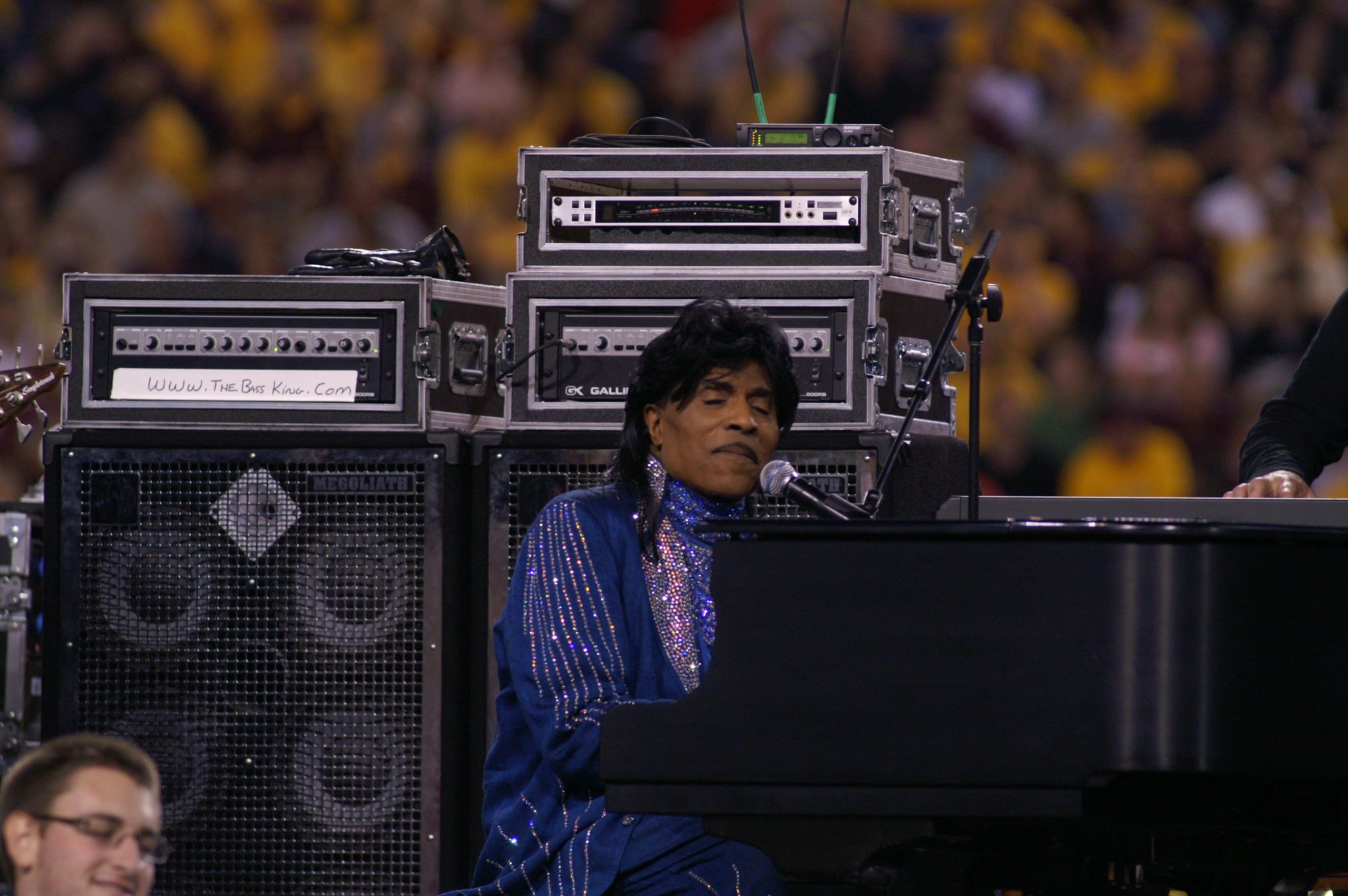 Little Richard died this weekend of bone cancer at 87. He is survived by Awopbopaloobop Alopbamboom.

Like so many of his records, Little Richard exploded in a burst before quickly disappearing. His “Quasar of Rock ’n’ Roll” nickname seems appropriate. Fans, more stunned by Little Richard than Sputnik, felt energized, experienced catharsis, and replaced monotony with unpredictability in “Keep a Knockin’,” “Rip It Up,” “Good Golly, Miss Molly,” and so many other driving, pounding numbers.

He shouted lyrics, abruptly changed cadence, sang without catching his breath, and did so much else professionals counsel against. Whereas guitars eventually drowned out everything else, the Little Richard sound relied more heavily on saxophones and piano. Whether he punctuated a line with “ooow” or “wooo,” it proved contagious. He infused gibberish with meaning. The crowd jumped, danced, sang along. Women, in a first, tossed their undergarments on stage. Nobody sat still.

Little Richard invaded the top 40 nine times between the fall of 1955 and the spring of 1958. Outside of that 30 or so months, he never scored a hit record in the United States. The Army took Elvis. The police took Chuck Berry. The press erased Jerry Lee Lewis. A more powerful force, the same one that took Buddy Holly, removed Little Richard from pop culture.

Little Richard went to gospel music and Bible college and evangelism. Where did he come from?

Richard Penniman hailed from the planet Macon, Georgia. There, as recounted in Charles White’s The Life and Times of Little Richard, he played with girls, dressed like them, and walked like them, too. “They thought I was trying to twist and walk feminine,” he recalled of taunts received because of a unique gait as a result of the mismatched length of his legs. Upon learning of an older woman’s birthday, young Richard defecated in a box, wrapped it, presented it as gift, and waited outside in the bushes to hear her reaction. “I did my no-manners in a jar,” he explained to White of another escapade. “I don’t know why. I used to like to do things in jars and boxes and stuff. I did some in a jelly jar, and I did it very neatly, and I closed up the jar and put it up in the cabinet with Mother’s preserves.” As a youngster, as he relayed to his biographer, an older woman recruited him for sex and older men paid to perform sex acts upon him. Some older boys took sex with neither payment nor permission. His mother once pelted him in the back of the head with a glass bottle. His father, murdered outside of his bar when the son he had encouraged to leave home was 19, told Richard that he disappointed him because he wished for seven boys but merely got six-and-a-half because of him.

When Doctor Nobilio, a local seer who burned the questions of supplicants before setting his supernatural eyes upon the queries, answered his sidekick, “Boy, you’re gonna be famous but you’re gonna have to go where the grass is greener,” Little Richard surely grasped that common sense rather than prophetic gift led the human spectacle bedizened in a turban and cape and accompanied by a mummified animal-human hybrid to this conclusion. He eventually took Doctor Nobilio’s advice (and his wardrobe) with a nudge from the local authorities.

The most important book to understanding the Little Richard phenomenon is not Charles White’s The Life and Times of Little Richard but Lawrence Levine’s Highbrow/Lowbrow: The Emergence of Cultural Hierarchy in America, which never even mentions the pompadoured performer. People once tossed sacks of flour and threw rotten tomatoes at actors playing villains, Levine explains, and they rioted over plays. Then etiquette demanded that theatergoers sit silently. Other art forms followed this pattern. “With important exceptions — particularly in the areas of sports and religion — audiences in America had become less interactive, less of a public and more of a group of mute receptors,” Levine notes. “Art was becoming a one-way process: the artist communicating and the audience receiving.”

The reason Little Richard resonated with audiences, and rock “artists” today do not, involves crowd participation. Then, the energy invited, nay, compelled the people to become part of the performance. Now, the performers demand obedient observers to behave as though the well-disciplined classroom of an especially fascistic schoolmarm. Little Richard succeeded because he made music a participatory, democratized activity. His elitist heirs fail because they imagine themselves as artists who dictate to our intellect rather than communicate to our bodies and souls.

At least the most recent heirs fail. Without Little Richard, Paul McCartney sounds more like Peter and Gordon, Prince looks more like a Rick James impersonator, and David Bowie acts more like Hugh Grant. And perhaps we never hear from Little Richard sidemen Billy Preston and Jimi Hendrix. Little Richard was one of a kind, but this did not stop others from trying to become his kind.

People who stand out do not at first fit in. One persisting in the face of parental abuse, sexual exploitation, the bullying of peers, racism, poverty, and so many other oppressive forces finds daring to be different no dare at all.

Rather than curse the birthplace that inflicted scars, he celebrated it for forming him. In a 2004 interview with Ken Paulson, the well-traveled Little Richard affirmed that only in America could he become Little Richard:

I’ve never seen nothing like this country. This is the greatest country in the world, and it is God’s country. God set this country up to be a depository of his truth, to be an outlet to the whole world — that’s what this country is. God made us the wealth, so we can be a blessing to other people to keep them in health. But we have got to be a blessing and a lesson. I think we should be both — a blessing and a lesson. I’m just glad, to the Lord, that I’m an American. You’re blessed to be born in this country. Like some people say, “Well, I’m from Africa.” I ain’t from Africa. I’m not against Africa. I love Africa. I’m from Macon, Georgia. I’m an American black boy from Macon, Georgia.

Although Hitler and Mussolini and Castro used their charisma to oppress, we remain thankful that the most charismatic man of the 20th century used his gift to liberate. Little Richard, RIP (it up).