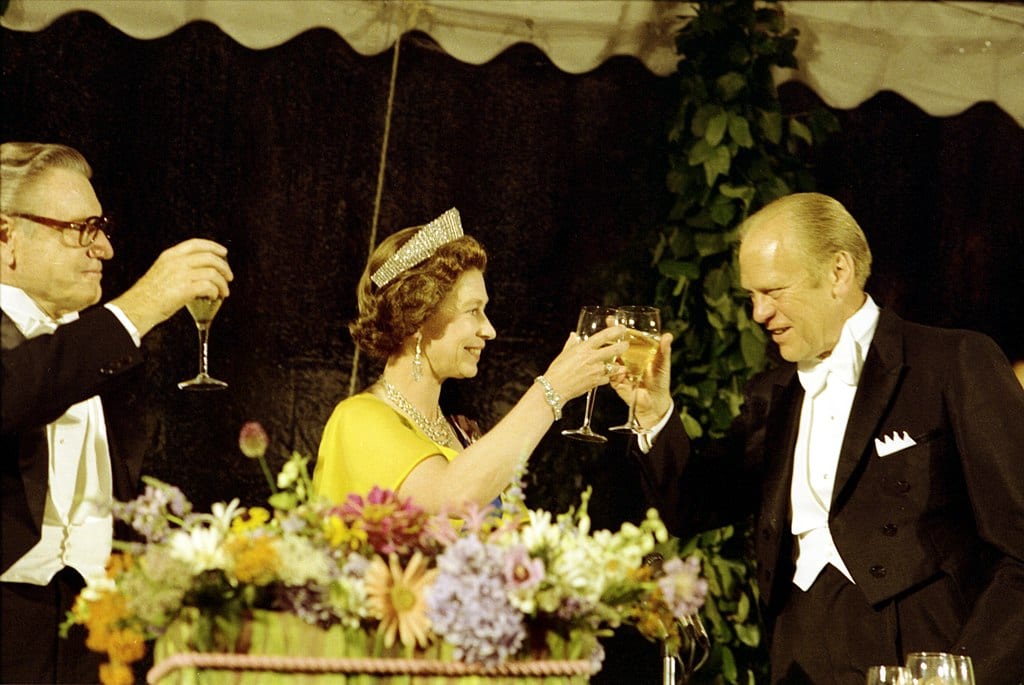 Last week was a good week for Queen Elizabeth II. At 93 years of age, she once again asserted her authority and looked, by the way, terrific. Good show, Your Highness.

But last week was a bad week for Harvey Weinstein, the disgraced Hollywood producer, friend of the Clintons, major Democratic donor, and defendant accused of rape, a criminal sex act, and predatory sexual assault. He is 67. If he is found guilty, he faces life in prison. My guess is he will ask for a jail cell near Bill Cosby. They appear to have a lot in common and can swap tales, possibly even swap pictures.

Harvey has taken to using a walker to hobble in and out of the courtroom, hoping he will gain sympathy from moviegoers. He was a major Hollywood figure and allegedly a lot of fun. But I have my doubts.

As George Orwell said, by age 50 “everyone has the face he deserves,” and a good defense lawyer if he has read Orwell will lead Weinstein into the courtroom with a bag on his head. Maybe Harvey will wear a droopy smile button on his lapel. Oh, how the mighty have fallen.

As I see it, things look bleak for Harvey. Even my plan to have a Harvey Weinstein look-alike contest has been put off. I have been asking around for possible contestants, but there are no takers. Not even Michael Avenatti, and he could use a little good publicity.

Last week, all Avenatti got was bad news. Consider, if you will, Wednesday. It should have been for him a great day. The House of Representatives sent the Senate the articles of impeachment for President Donald Trump. Avenatti has been waiting for this day for well over a year. Unfortunately, when the House of Representatives moved, he was sitting in a common hoosegow and was not in a very celebratory humor. He was arrested the day before for violating the terms of his bail, and a judge ordered him held without bond until his three federal trials are sorted out. That will take a long time.

You might recall back in 2018 when Avenatti chided Donald Trump Jr. about his likely stay in the big house, possibly even the prison that Avenatti now inhabits. Tweeted Avenatti: “BTW, they don’t have silver spoons or gold toilets in the joint.” And he ended with, “Buckle up Buttercup.” Imagine, this chap has been traveling the country apparently a free man for years. Now he looks like a one-man crime wave. Though it might not be entirely his fault. I have a theory, as yet unproven, that people take on Donald Trump Sr. at their own risk. Call it the Trump Curse, if you will, but oftentimes people cross him at their own peril. Imagine what might be the fate of the Democratic majority in the House of Representatives if they go through with this sham impeachment.

Think of Avenatti. A year or so ago he was headed to Iowa and New Hampshire, testing the waters for a presidential run. He was featured on television. He had money in the bank, in several banks. Some of it was even his own, and he had the blessing for his presidential campaign from the likes of CNN and MSNBC. Google him in Iowa and New Hampshire, if you do not believe me. Now he is in the hoosegow, possibly solitary confinement!

Avenatti, Weinstein, and, come to think of it, Bill Cosby, too, are the kind of people who appear on our lists of most admired Americans — even the Clintons appear there. I would bet you that the names of offenders of the #MeToo movement include dozens, possibly scores of once famous Americans on such lists. Remember Matt Lauer. Recall if you will Charlie Rose. And we could put together other lists of other miscreants too. How about shoplifters? How about forgers?

Yet, as I began this column, let me end it. In London last week, a very old lady, but a very exceptional one, acquitted herself admirably and not for the first time. She had a public relations disaster handed to her, and she rose to the occasion. She called the whole family into her country residence, Sandringham, and worked out an agreement that seemed to work. I am sure that not everyone was pleased, but the Queen worked things out. Even her American granddaughter-in-law seemed content.

Queen Elizabeth is a remarkable lady. She has an enduring sense of duty, and she tries to confer it on her family. She lives by high standards, which she also confers upon her family. Hopefully she is an exemplar for the people of Britain, of the Commonwealth, of all the English-speaking nations — even the Democratic presidential candidates who had hoped to make the F word a mark of, I guess you would say, authenticity. God bless the Queen.