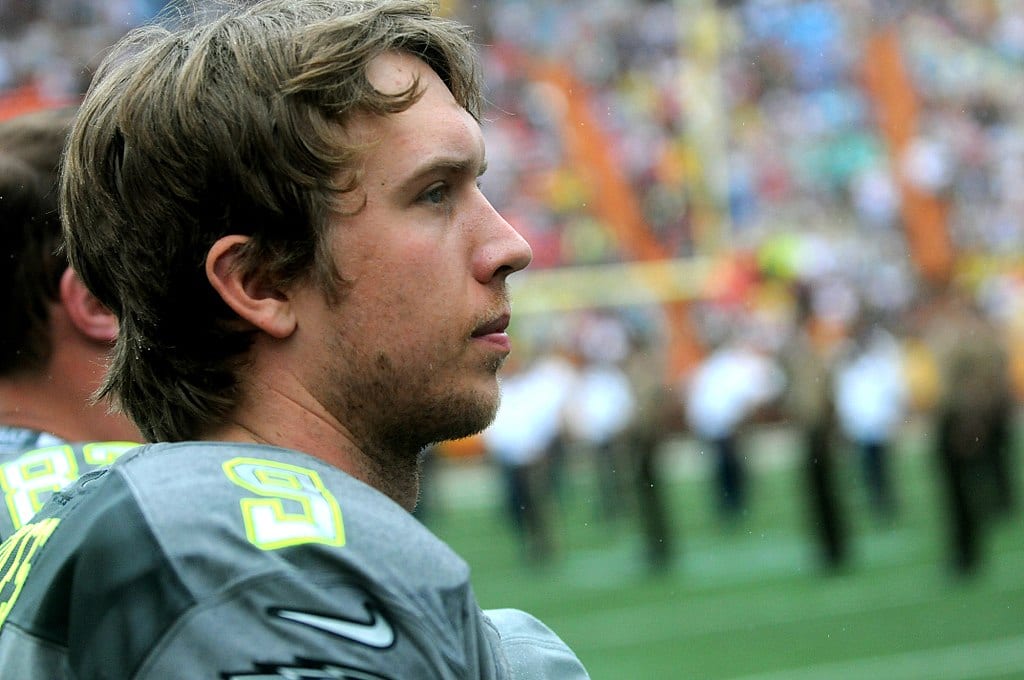 It was a perfect setup for cynics. If you were a hater of fairy tale endings, then you had to be looking forward to this one like the crocodile lurking at the waterhole when the wildebeests begin to arrive.

Bob Ford, sports columnist for the Philadelphia Inquirer, put it to the hometown fans straight. Not to say brutally:

Get ready for “Nicky Foles: Should Have Quit While He Was Ahead.” It really isn’t his fault, and hopefully that will be remembered, but what is about to happen to last season’s savior might not be pretty …

“He’s the Super Bowl MVP. He’ll be fine,” safety Malcolm Jenkins said, and that glib answer will serve until Sunday night in the Los Angeles Coliseum where the legend of the backup began and where it could come to a crashing end.

Until the sun sets heavily over the western wall of that ancient building, there is still a giddy narrative available to the true believers: The Eagles rally themselves once again for an improbable finish led by the taciturn deputy who takes over for the fallen sheriff. After all, it did happen once.

Except for the ‘Nicky,’ this was fair enough. The diminutive was a cheap shot. Nick Foles is, indeed, the reigning Super Bowl MVP and this offends the sensibilities of those who see the world — and sports, especially — like Damon Runyon, who famously wrote: “The race is not always to the swift, nor the battle to the strong; but that is the way to bet.”

Cinderella stories are for saps and sentimentalists. Fairy godmothers are no good at blocking 240-pound blitzing linebackers.

But the fairy tale came true, last year, for Foles. He been riding the pine for the Philadelphia Eagles when, with a couple games left in the regular season and the team heading for the playoffs, starting quarterback Carson Wentz went down with a knee injury that would require surgery and a long rehab.

Foles was the backup and the very picture of a journeyman. He had been drafted in 2012 by the Eagles. He’d had some good games, including one in his second season where he threw seven touchdown passes and no interceptions. It was only the third time in NFL history this had been done. The Eagles went to the playoffs. Foles was selected to play in the Pro Bowl.

Things were not that good for Foles the next season and he was traded to the St. Louis Rams where he performed erratically. NFL coaches hate interceptions like vampires hate sunlight and Foles threw too many of them. He was benched and eventually he asked to be released. He went on the free agent market where he was picked up by Kansas City. He backed up Alex Smith and when management decided not to exercise the option for a second year of his contract, he was on the street. He thought about quitting the game before the Eagles signed him to back up Wentz, their quarterback of the future and second overall pick in the 2016 draft.

A study of Foles’ career leads one to wonder what had gone wrong. Why, after a playoff and Pro Bowl season when his passing rating was best in the NFL and third best in league history, putting him the company of quarterbacks like Peyton Manning and Aaron Rodgers, had he found himself backing up Alex Smith and, of all people, Mark Sanchez.

Could it be explained by another of those sports aphorisms, this one generally attributed to Leo Durocher, a baseball figure who might have been talking about football when he said, “Nice guys finish last.”

Foles is a nice guy. He looks like a choir boy and he is, in fact, a committed Christian who plans on becoming a pastor after he retires from football. Tony Dungy, the former coach and one of football’s legendary good guys, says of Foles, “His Christian faith allows him to be comfortable in whatever role he has to play for the team and also lets him relax on the biggest moments on the field. He is a tremendous young man — a great leader and role model.”

In a culture that celebrates toughness this is not necessarily a recommendation. There are plenty of football people who might call Foles “soft” and this is just about the worst that can be said of a player. In that game you are looking for Brett Favre.

In any case, Nick Foles started the 2017 season on the bench where he remained until that game in Los Angeles when he went in for the injured Wentz.

The Eagles went on to the playoffs where they defeated, first, the Atlanta Falcons and, next, the Minnesota Vikings.

Next up, Tom Brady and the New England Patriots in the Super Bowl.

Foles played the game of his life, completing 28 of 43 passes for 373 yards and, memorably, catching a touchdown pass on a trick play. Final score 41 to 33 with Foles named MVP.

This season, Foles started the Eagles first two games while Wentz was still rehabbing his knee. Then the coach turned back into a pumpkin and he returned to the bench and his role as backup. He had won his Super Bowl and would, it seemed, be remembered with other one-timers like Trent Dilfer and Jeff Hostetler. But he seemed okay with it (as they say) and, after all, he had almost quit the game in those days when he was backing up Mark Sanchez. He has thought on things, to include failure and how one deals with it and he said this after the Super Bowl:

I think the big thing is don’t be afraid to fail. In our society today, Instagram, Twitter, it’s a highlight reel. It’s all the good things. When you look at it, you think, like, wow, when you have a rough day, your life’s not as good as that, [you think] you’re failing. Failure is a part of life. That’s a part of building character and growing. Without failure, who would you be? I wouldn’t be up here if I hadn’t fallen thousands of times, made mistakes. We all are human, we all have weaknesses.

The Eagles were still fighting for their playoff lives when Wentz fractured a vertebrae and Foles became the starter in a must-win road game, last Sunday, against the Los Angeles Rams, a team with one of the best records in football and a very aggressive pass defense. Especially the rush which features Aaron Donald who leads the league in quarterback sacks and Ndamukong Suh who is number one in sheer nastiness.

If Foles were, indeed, “soft” then it would, as Bob Ford had written, “… not be pretty.”

The Rams were favored by two touchdowns and that seemed, to some, charitable. But the Eagles pulled off one of the season’s biggest upsets in what turned out to be, if not an “ugly win” then certainly a tough one. With Nick Foles being the toughest guy on the field. The moment after the ball left Foles’ hand for a crucial long completion, Ndamukong Suh plowed into him at flank speed, took him off his feet, and planted him on the ground. It was all legal by the rules of football even though it looked something like attempted murder.

Foles gathered himself up and went on about defeating the Rams and keeping the Eagles in the playoff hunt.

Now and then, it seems, nice guys don’t finish last.