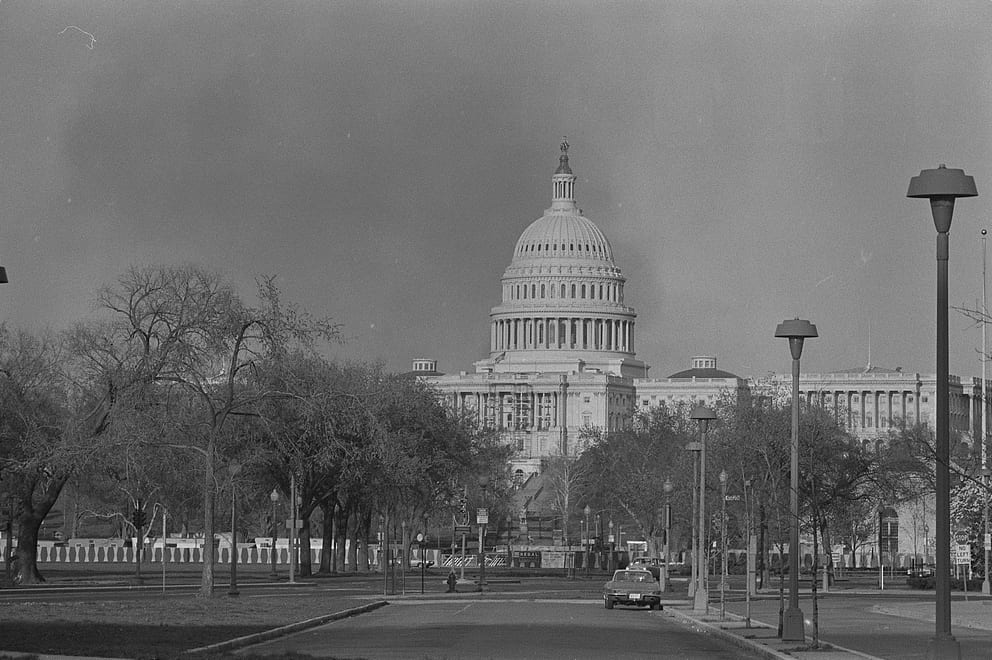 The next morning, my young bride and I left our apartment in Arlington, Virginia, to drive into Washington. She dropped me off at the Georgetown Law Center and then drove to the Washington Hospital Center, where she worked as a nurse.

In those days, Georgetown Law was located at Fifth and E streets Northwest in Washington. I can’t recall who taught my first class that day. All I remember is that the professor appeared to be on the verge of tears as he spoke to us of King’s assassination and what it said about the state of race relations in America.

My next class was corporate taxation. The professor spoke briefly but soberly about the meaning of King’s death, and then launched into a lecture about the tangled mess that was and remains the U.S. Tax Code.

He was interrupted when the dean of the law center stepped onto the raised dais at the front of the room and spoke quietly to him and then addressed the class.

The dean announced that rioting had broken out in Washington and that classes were canceled until further notice. North and west of the school, mobs were looting and setting fires. For that reason, when we exited the building, we were to move south and east.

My friend Larry and I packed up our books and headed on foot straight for the rioting. Larry’s wife worked at the National Archives, and we were on a mission to rescue her. We also wanted to see the riot up close.

As we walked along, we saw crowds breaking storefront windows and walking down the street with armloads of merchandise as uniformed D.C. police officers stood by passively. We didn’t see any fires but could smell smoke.

When we got to the National Archives, we met up with Larry’s wife, who had parked their car nearby. The three of us then drove to their apartment in far northwest D.C., where Larry and I spent the afternoon drinking beer and watching the riot on television.

Across town, when my wife left work, a black friend drove ahead to provide her with what they hoped would be safe passage through the minority neighborhood where the Washington Hospital Center was located. As my wife drove out of the city, she passed armored vehicles heading into Washington, which, we learned later, were being driven by regular Army troops from the Sixth Cavalry Regiment at Fort Meade. Once she made it safely out of the city, she stayed with friends in Maryland.

As the sun was setting, Larry drove me to Arlington. On the way, I recall looking down from the George Washington Parkway and seeing a massive black column of smoke rising from the city.

Washington had been placed under martial law. By Executive Order 11403, President Johnson sent 11,850 federal troops and 1,750 D.C. National Guardsmen to assist the D.C. police. Pursuant to that executive order, U.S. Marines from Quantico mounted machine guns on the Capitol steps, and regular Army soldiers from the Third Infantry Regiment set up a defensive perimeter around the White House.

My wife’s sister was a student at Trinity College in northeast Washington. The next day, we drove through riot-torn streets to pick her up and take her to National Airport for a flight home. As we drove down North Capitol Street, regular Army troops from the 82nd Airborne Division were evenly spaced along the thoroughfare as far as the eye could see. They had fixed, unsheathed bayonets on their rifles and looked ready for action.

By the time the D.C. rioting ended, 13 had died and 1,098 had been injured. And, with the active participation of the United States Army and Marine Corps, over 6,100 had been arrested.

What is the point of this trip down memory lane? Well, consider the following.

Since 1968, the people of this nation have invested untold billions of dollars in Lyndon Johnson’s Great Society and similar social welfare programs in a well-intentioned and generous effort to alleviate the plight of America’s disadvantaged minorities. But now, 52 years and billions of dollars later, what is the status of those whom we have sought to help?

Thankfully, many have made progress and achieved the American dream. But, apart from them, far too many continue to victimize each other in a neverending cycle of black-on-black violence and crime, in which homicide is the leading cause of death among young black males. And, as we have seen, far too many still engage in rioting, looting, and burning when the opportunity presents itself.

And consider what we are being told by the self-flagellating progressives and violent angry agitators about how hateful we are as a nation and how indifferent we have been to the plight of America’s minorities. It’s as if the civil rights revolution and the Great Society never happened. To those people, whose worldview has been shaped by the progressive triumvirate of academia, the mainstream media, and the entertainment industry, America is frozen in time. To them, it will always be Mississippi circa 1932.

And for those military leaders like Gen. James Mattis and Defense Secretary Mark Esper, who recoiled in horror at President Trump’s mere mention of possibly using the military to restore order, it may come as a surprise to learn that the United States Army and Marine Corps were sent by President Johnson, the creator of the Great Society, to put down the 1968 rioting in Washington. It may come as a surprise to them, but it shouldn’t. It happened, and no one — in or out of the military — questioned either the wisdom or the propriety of using the regular Army and Marines to end the violence.

Have things changed since 1968? Yes, they have. Today we are reaping the bitter harvest of the mindless and baseless self-hatred and hatred of America that has been assiduously sown for decades by academia, the mainstream media, and Hollywood. This has produced legions of middle-class white people who are debasing and herniating themselves in a desperate effort to publicly demonstrate that they are free of the original sin of racism and are better and more enlightened than the rest of us deplorables. It has also enabled a caste of progressive public officials who seek to exploit the violence for their own political purposes and benefit.

From that standpoint, 1968 — the year of anti-Vietnam War protests, rioting across America, and the murders of Martin Luther King Jr. and Bobby Kennedy — compares more than favorably with the needless, unwarranted, and self-inflicted disaster that is 2020.

George Parry
Follow Their Stories:
View More
George Parry is a former federal and state prosecutor who practices law in Philadelphia and blogs at knowledgeisgood.net.
Most Popular
Sign up to receive our latest updates! Register