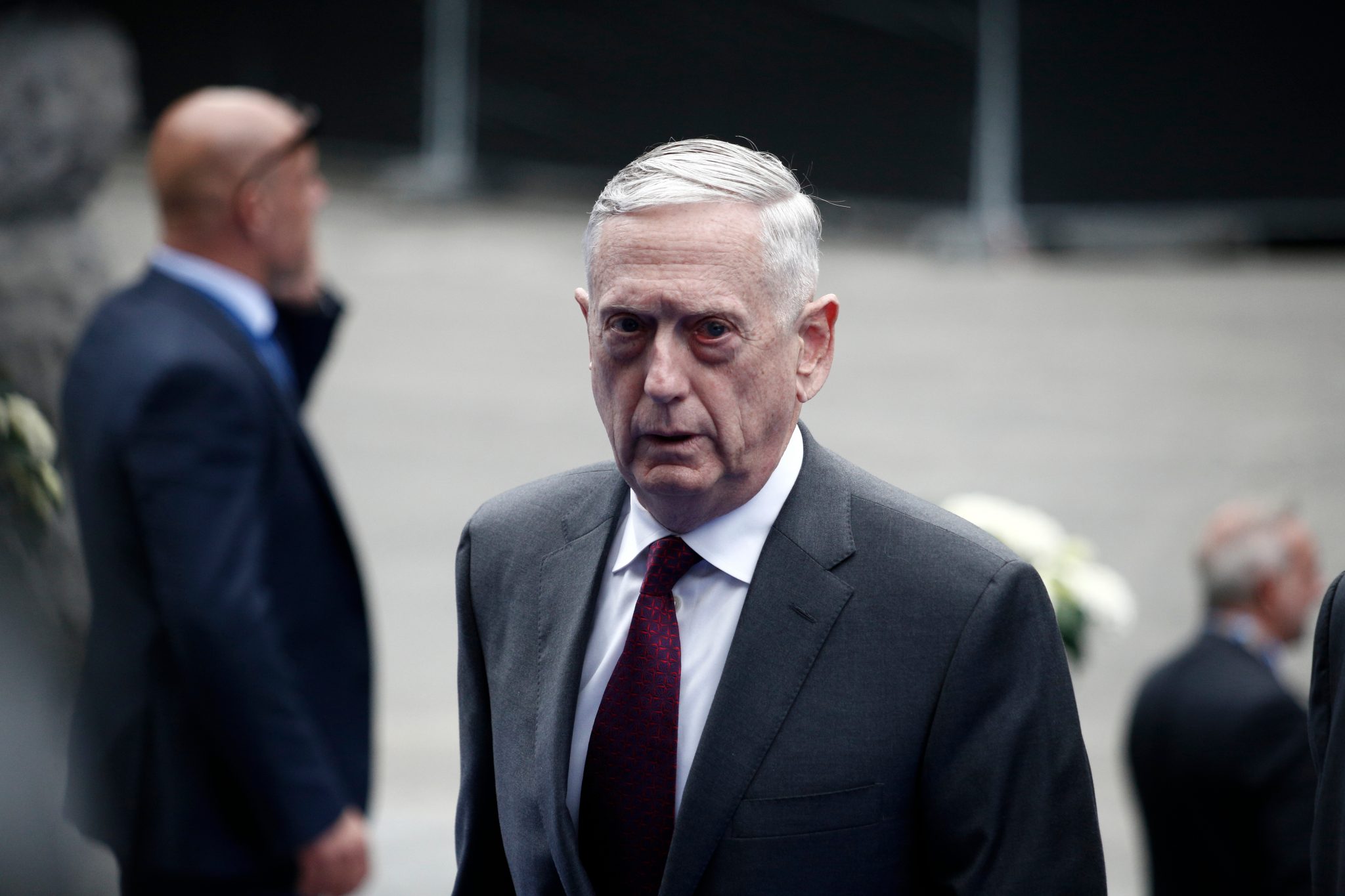 Gen. James Mattis served his country well and with honor. He is, without doubt, an American patriot.

But that doesn’t give him a pass from his recent anti-Trump diatribe in the Atlantic. This screed was filled with bad history and an apparent willful ignorance of exactly what President Trump has been saying and doing. It is a perfect example of a Washington Establishment figure completely and totally out of touch with the reality of history and facts.

We must reject any thinking of our cities as a “battlespace” that our uniformed military is called upon to “dominate.” At home, we should use our military only when requested to do so, on very rare occasions, by state governors. Militarizing our response, as we witnessed in Washington, D.C., sets up a conflict — a false conflict — between the military and civilian society. It erodes the moral ground that ensures a trusted bond between men and women in uniform and the society they are sworn to protect, and of which they themselves are a part. Keeping public order rests with civilian state and local leaders who best understand their communities and are answerable to them.

With all due respect, General? Here’s a historical reality check.

The Washington Post did a look back at the 1968 riot in Washington, D.C., that erupted after the assassination of Dr. Martin Luther King Jr. A riot that killed 13 people and damaged 900 businesses, many of them minority-owned businesses.

From the air, through the haze of smoke, the city looked like a battlefield. On April 5, a convoy of soldiers from Fort Myer in Virginia began rolling over Memorial Bridge into the city. More came in from Fort Meade in Maryland. Eventually, 13,000 troops would arrive — the most to occupy an American city since the Civil War.

The president of the United States who did this was Democrat Lyndon B. Johnson. Say again, it was President Johnson — not Donald Trump, who in 1968 was 22 years old — who sent 13,000 soldiers to “occupy” Washington and restore order. And why did LBJ send in the military? To use the language Gen. Mattis is scorning, LBJ sent them in to “dominate” the nation’s capital and restore order.

Here is more from the Washington Post to refresh the General’s memory of the “battlespace” that Washington, D.C., had become in 1968:

Store windows were shattered and bystanders became looters, dashing inside to grab what they could: TVs, clothing, food, beer, hats, shoes. One man bled to death when he slashed his neck and chest on a broken store window.

Fires began spreading throughout the city. The D.C. fire department’s handwritten logs from that night note the crowd growing bigger and angrier, setting cars ablaze at dealerships and stoning overwhelmed police and firefighters as they responded.

“Fire department is leaving the scene of a large fire because being shot at.”

By 2 a.m. Friday, hundreds of police had begun to regain control, but fires ignited again by noon and the riots intensified. The city’s mayor asked for federal troops to move in. Other neighborhoods erupted — Seventh Street NW almost down to the Mall; H Street NE to Benning Road; Rhode Island Avenue NE; streets in Anacostia, among others. Stores were smashed and looted; hundreds of fires finished the job. Many never reopened.

“It looked like a war zone,” said Darryl Stoutamire, who lived at 15th and W streets. The damage was staggering — at least $175 million in today’s dollars. More than 900 businesses were damaged, including half of the city’s 383 liquor stores. Nearly 700 dwellings were destroyed, most because they were above or next to merchants. Police arrested 7,600 adults and juveniles on riot-related charges. Bustling blocks were reduced to rubble.

The area around 14th and U streets NW was known as the Black Broadway, a world of black theaters and jazz clubs, black lawyers and pharmacists, black newspapers and the local offices for two major civil rights groups. During the riots, the stores north of U Street, where blacks felt exploited, became targets. They were stripped clean, up the 14th Street hill to Columbia Heights.…

Of the three major corridors, Seventh Street in Shaw was the most decimated. Half of the housing damaged throughout the city was along that corridor, and 200 of the 250 businesses along the major shopping thoroughfare were hit. Many black proprietors put “soul brother” signs on their windows, and that offered some protection. But a sign was of no help when someone firebombed the shop next door.…

By the weekend, the smoke began to clear. Sen. Robert Kennedy (D-N.Y.) made a tour of the damage. Bewildered people started making their way among devastated neighborhoods and wondering how and when their communities would ever come back.

What Americans are seeing right now in one city after another — all of them run for decades by Democrats — is a rerun of what happened in Washington, D.C., in April 1968.

Not to put too fine a point on it, but the city officials of Washington in 1968 were completely unable to restore order by themselves. They in fact very much needed those 13,000 troops LBJ sent in to “dominate” the “battlespace” their city had become.

The president’s trip to St. John’s Church — literally burned the night before — was precisely to show he was doing his job to “protect and defend” religious liberty, a right that is specifically enshrined in the Constitution.

But if a president showing up at St. John’s and holding up his bible for the cameras is “bizarre”? Then why hasn’t Gen. Mattis condemned this photo of President Bill Clinton doing the very same thing with a Bible or prayer book in front of the very same church?

The General also says, stunningly, this:

Donald Trump is the first president in my lifetime who does not try to unite the American people — does not even pretend to try. Instead, he tries to divide us.

Really, General? Really? One has to respectfully ask: Are you even listening? Just the other day in his speech at the launch of the SpaceX, Trump said this:

Before going further on this exciting day for all America in space, I want to say a few words about the situation in Minnesota. The death of George Floyd on the streets of Minneapolis was a grave tragedy. It should never have happened. It has filled Americans all over the country with horror, anger and grief. Yesterday, I spoke to George’s family and expressed the sorrow of our entire nation for their loss. I stand before you as a friend and ally to every American seeking justice and peace and I stand before you in firm opposition to anyone exploiting this tragedy to loot, rob, attack and menace. Healing, not hatred, justice, not chaos, are the mission at hand.

The police officers involved in this incident have been fired from their jobs. One officer has already been arrested and charged with murder. State and federal authorities are carrying out an investigation to see what further charges may be warranted, including against sadly, the other three. In addition, my administration has opened a civil rights investigation and I have asked the Attorney General and the Justice Department to expedite it. I understand the pain that people are feeling. We support the right of peaceful protestors and we hear their pleas, but what we are now seeing on the streets of our cities has nothing to do with justice or with peace. The memory of George Floyd is being dishonored by rioters, looters and anarchists. The violence and vandalism is being led by Antifa and other radical left wing groups who are terrorizing the innocent, destroying jobs, hurting businesses and burning down buildings.

The main victims of this horrible, horrible situations are the citizens who live in these once lovely communities. The mobs are devastating the life’s work of good people and destroying their dream. Right now, America needs creation, not destruction, cooperation, not contempt, security, not anarchy and there will be no anarchy. Civilization must be cherished, defended, and protected. The voices of law abiding citizens must be heard and heard very loudly. We cannot and must not allow a small group of criminals and vandals to wreck our cities and lay waste to our communities. We must defend the rights of every citizen to live without violence, prejudice, or fear. We support the overwhelming majority of police officers who are incredible in every way and devoted public servants. They keep our city safe, protect our communities from gangs and drugs and risk their own lives for us every day.

What in that speech is divisive? Spending serious time flatly condemning the killing of George Floyd divides the American people? Speaking to George Floyd’s family is divisive? To say “America needs creation, not destruction, cooperation, not contempt, security, not anarchy and there will be no anarchy. Civilization must be cherished, defended, and protected” is dividing Americans? Saying, “Let us also commit to a brighter future for all of our citizens right here on earth. When Americans are united, there is nothing we cannot do” is now not uniting?

With all due respect, the General is simply not paying attention — or, worse, he is paying attention and is deliberately misrepresenting the president to score political points with the Washington Establishment and the Trump-hating media.

In either case, what Gen. Mattis is doing here is wrong. Seriously wrong, divisive, and totally unworthy of an American patriot.