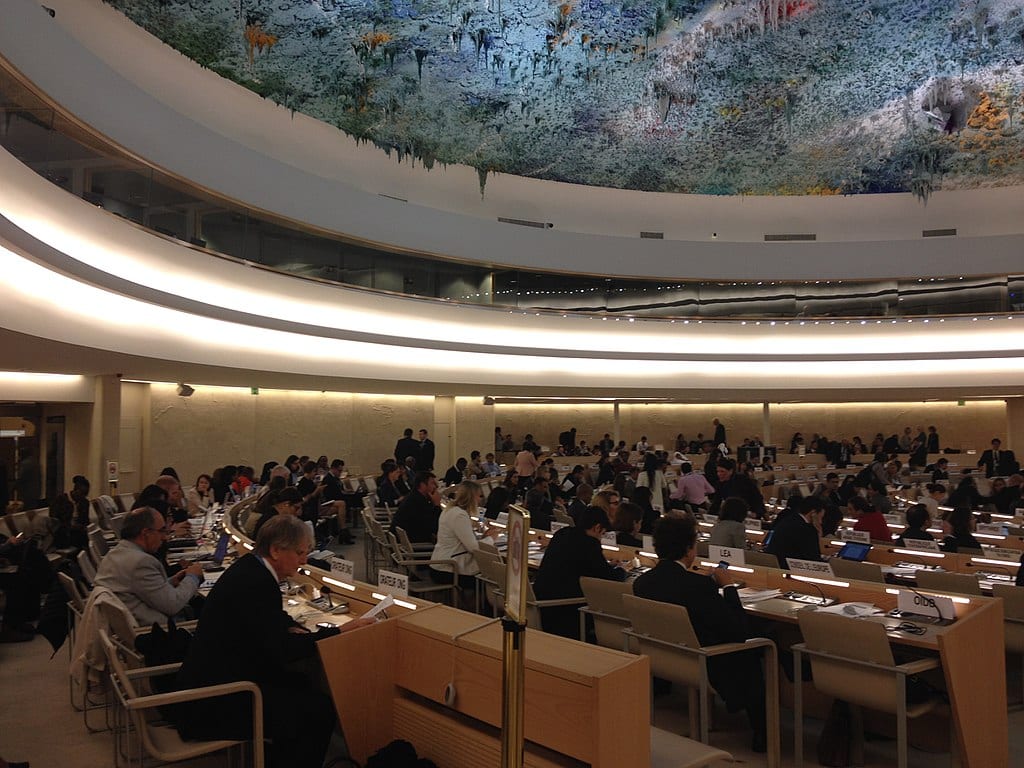 1. A Catholic priest, a Protestant pastor, and a Rabbi walk into a bar. What do you call such a bar?

2. In a class of 397 medical students, what do you call the student who has the lowest passing grade?

Answer: You call that person “Doctor.”

3. What do you call a room comprised of people selected to represent and advocate for governments that promote murder, rape, butchery of their own innocent citizens, bigotry, persecution, crucifixion, enslavement of dark-skinned people, defenestration and other cruel and unusual forms of capital punishment against gays and lesbians, the burning of churches and the eradication of Christians from their lands, and ethnic cleansing of minorities including but not limited to Kurds, Armenians, Berbers, and Baluchis, and the persecution and torture of Muslims who oppose violence and terror promoted by Islamism as represented by Hamas, Islamic Jihad, Hezbollah, ISIS, and Al Qaeda?

Simple riddles. Straightforward answers. Get the jokes? Get them? No?

That is because, through eight years of Obama and Secretary of State Clinton — of whom Obama said that no person ever was so well qualified as she to run for President — and Secretary of State Kerry, and Obama National Security Advisor Susan Rice, the joke was on us. The joke was on us that our country that once had been so great, and that now is more than 500 days on the road to being great again, found itself mired through the Obama Years in the cesspool of moral filth that calls itself the United Nations Human Rights Council (UNHRC). What a joke!

First, while we are laughing, take a look at the current membership of these Human Rights members. Here are ten favorites:

Let’s see. The Rwanda majority Hutu government murdered between 500,000 and 1,000,000 — yes, that’s one million — Tutsis in 100 days. It took Hitler almost five years to murder six million Jews, and Hitler and Eichmann had access to machinery. How could Rwanda even murder so many people so fast? That is 10,000 a day — the rate that Jews were being murdered in Auschwitz at its peak. OK, so Rwanda belongs on the UNHRC. As they say, they earned their stripes.

Then, let’s see, Afghanistan. Yep. That one’s an easy call. Just ask any woman there. Or Christian. Or one of the two last Jews left in the country.

And Iraq. Definitely. After all, President Bush led us in a crusade of nation-building there. Purple ink on fingers for voting. Moqtda al-Sadr, the anti-American Islamist emerging as the big winner in the recent elections. OK, they can be on the UN Human Rights Council, too — no need to pass the metal detectors…or they will short-circuit from the overload.

And how deny Pakistan? Home to Al Qaeda and Taliban “activists.” Islamist Mullahs mulling and mauling on the Afghanistan border. The vacation hot spot where, of all the places served by Sheikh Obvious, Osama Bin Laden chose to settle with his various wives, computers, and other wives. The country from which the most savage terror attacks in India hatch. The country that has imprisoned the heroic medical doctor, Shakil Afridi, who helped America locate Bin Laden and bring him to justice under the sea, under the sea.

Venezuela. The oil-rich fabulously wealthy nation that allowed Hugo Chavez and his protégé Nicolás Maduro to conduct the economic and social experiments that proved, once and for all, how much value-added totalitarian Socialism can bring to an economy that cannot possibly falter. Even legendary Los Angeles Dodgers baseball announcer Vin Scully could not but marvel, as he called a game during his final year before retirement, thus safe from the P.C. Police to call the balls and strikes as he saw them. A shame that Bernie Sanders could not be on hand at the stadium that night to throw out the first ball.

Cuba. Need to say more? Che (not the old Mets stadium). Castro (not the convertible sofas). Then the next Castro. The land with which Obama danced the tango. Sanctuary and safe haven for police murderer Joanne Chesimard. A country so steeped in human rights that more than two million Cubans now live in and contribute mightily and meaningfully to the greatness of the United States.

Democratic Republic of the Congo. The name says it all…and this Wikipedia entry adds luster and says the rest.

And of course Saudi Arabia — or perhaps better spelled Swordy Arabia, given all the hands those human-rights activists chop off, all the heads. The Clinton-donor country — and if Hillary takes their millions, you just know that they are a country that sends women to the highest offices of their land (to be tossed from the rooftops) — where women celebrated only this past year their newest human-right breakthrough: permission to drive a car. (Immediately thereafter, leaders of the “Women to Drive” movement were locked up.) Saudi Arabia, a country that bans Christians and Jews from even setting foot in certain of its cities. Migrant workers enslaved. Poets locked up for their words. Coerced confessions. Long prison sentences for posting anti-Government pro-freedom thoughts on Facebook. Standard justice including severe floggings of hundreds of lashes. Eight-year sentence for tweeting a criticism of the Justice Minister. Public gatherings banned since 2010. A blogger sentenced to 1,000 lashes and ten years in prison for criticizing the clerics. A seventeen-year-old boy arrested during “Arab Spring” street protests in 2012 sentenced to beheading and crucifixion.

Nor is the current den of iniquity just an unusually bad crop of nation-weeds. Albania was in until 2017. Algeria, China, and Russia were termed out in 2016 after their own distinguished moments of suppressing freedoms, assassinating dissidents, and locking up the others.

To the credit of President Trump, Secretary of State Mike Pompeo, and our UN Ambassador, Nikki Haley, the United States now is withdrawing from the UNHRC cesspool and taking a hike, leaving them to torture and butcher each other…and, during recess and play time, to pass resolutions condemning Israel. We do not belong there. Our presence does not civilize them. (Are we even allowed to say that in our Politically Correct society — that those countries need civilizing?) The UNHRC has been around for more than a decade, since 2006, the latest iteration of the disgraced and closed-down UN Commission on Human Rights. For eight years they particularly were exposed to the elegance and refinement of Nobel Peace Prize Laureate Barack Obama, the Harvard Law Review president who never published a law review article. If Obama could not help them change their barbarism as the oceans stopped rising and the planet healed, then President Trump is correct in determining that we can spend and leverage our millions in better ways. In the words of Ambassador Haley: “For too long the Human Rights Council has been a protector of human rights abusers, and a cesspool of political bias…We take this step because our commitment [to liberty and human dignity] does not allow us to remain a part of a hypocritical and self-serving organization that makes a mockery of human rights.”

America’s next logical steps should include sharply reducing our annual contribution to the rest of the United Nations, with a two- or three-year time frame successively reducing that number to zero. Moreover, now that we have a law saying so, the Taylor Force Act, we should stop funding the America-hating Palestinian Authority, who take our millions, repackage it, and then send it as huge stipends and bounties to the families of terrorists now sitting in prison or who otherwise blew themselves up. Let them all torture and butcher each other on their own Congolese and Rwandan francs, Venezuelan bolivars, Cuban pesos, Iraqi dinars, Qatar and Saudi riyals, UAE dirhams, and Pakistan rupees. Bring our dollars home. If they run short, Parker Brothers can print more for them.