The Nation’s Pulse,Top Story Coronavirus,COVID-19,COVID-19 and the Economy Learning to Meet a Deadly Threat - The American Spectator | USA News and Politics
Menu
The Nation’s Pulse
Learning to Meet a Deadly Threat
Here’s where the rubber hits the road.
by Shmuel Klatzkin
Women elbow bumping as a new greeting to avoid spreading coronavirus (Linda Bestwick/Shutterstock.com) 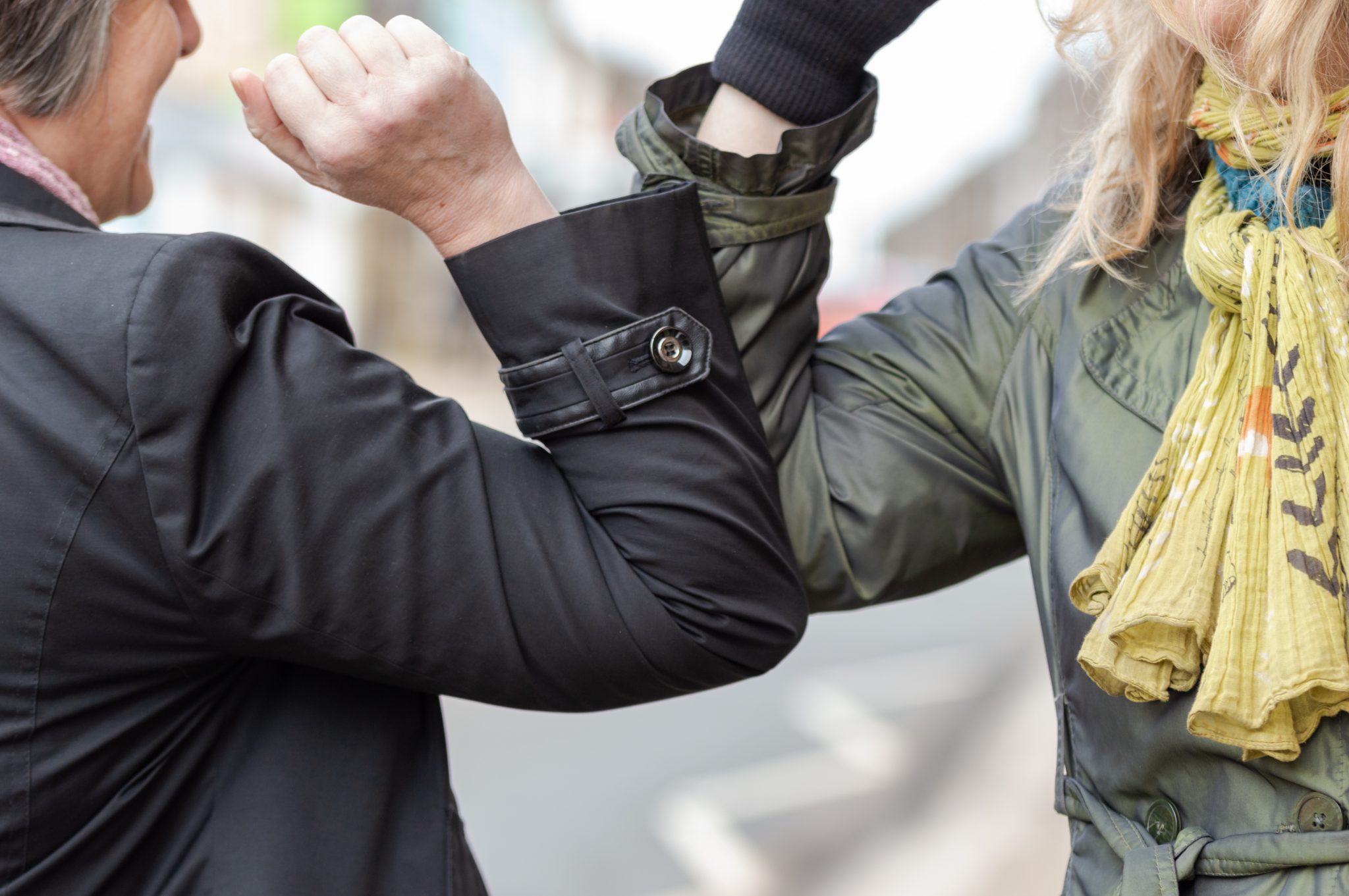 A deadly terror gripped more and more of the world, leaving death and dislocation in its wake. Even so, many in America clung to the hope that, as the days went by, somehow, we would be spared.

But we were not spared. The terror came to our shores, and Americans suddenly were dying, and it seemed that the bad news would only get worse.

Life turned upside down in America after Pearl Harbor in ways we had not dreamed of. Most of the mighty American naval fleet was sunk in the first hour of the war on Dec. 7, 1941. Thousands of our troops in the Philippines were soon forced to surrender. The Nazi empire declared war on us, as well, and its submarines sank our ships in sight of the Atlantic coast at a rate far faster than we could replace. The Nazi armies stood astride Europe from the Atlantic coast to the gates of Moscow.

But the test of America was not just to muster armed forces capable of somehow mastering the triumphant armies of Germany and Japan. The war did indeed require conscription of men in unprecedented numbers, but it also required a great deal of those left at home.

Armies have to be fed, and the armed forces took their share of the food production first; the Brits required food from us, as well. This sudden new and immense demand required things like meat, butter, and sugar to be rationed. Silk and nylon were needed for parachutes, and fashionable stockings became nearly impossible to buy.

Why did we have to stop using cars? True, auto production for civilian use was stopped, but people could still repair their cars and keep them running. And America was still self-sufficient in oil, so fuel was not a problem.

The problem was rubber. The dizzying series of Japanese conquests in early 1942 left most of the world’s sources of natural rubber in the hands of the Axis. Synthetic rubber was not yet a significant factor. Rubber had to be given first to the military, and little was left for civilians. Tires did not last nearly as long then as they do now, so they needed more frequent replacement. Only a few weeks into the war, a system was set in place that new tires could only be bought with a government certificate. On top of this, gas began to be rationed, as a double check for using up rubber.

There was much reaction to this drastic change in the quality of life. People were asked to use public transportation, walk, or just stay home. There was an ugly reaction when it turned out that Congress had written special rules for themselves, giving them access to gas and tires. The mood turned ugly. President Roosevelt in the end brought in a man who had won a great reputation in managing the home front problems during World War I: Bernard Baruch.

Baruch made a thorough study and issued a report in September 1942. He used numbers and plain talk to explain to the American people why rationing was necessary, and he made proposals for a system that was national in scope, transparent, and fair. This response, from the left-leaning New Republic, was typical: “The Baruch report on rubber seems like the first really good job done in Washington since the war began.” The right-leaning Fortune agreed: “The Baruch Committee report is supremely an example of the ability of a country and of a government to grow by its own criticism.”

When a huge country faces a huge, new, and deadly challenge, a winning response is no simple matter. As much as the Roosevelt administration is justly praised for how it led the way to triumph over the seemingly invincible Axis powers, the first few months were a tale of woeful consecutive failures and tremendous intrusions into the lives and freedoms of Americans.

The military failures were addressed in many ways and are not the main focus here. It is understanding how the initial failures to manage the home front did not freeze into institutional failure. The government upped its game and accounted for itself to the people. The people, both on the left and on the right, saw that and gave their assent. Those on the home front pitched in and believed their sacrifices made a vital contribution to winning the war.

Many years later, when I was a teenager, my father of blessed memory and I had heated arguments about the war in Vietnam. I remember vividly him saying to me that he could understand why my friends and I opposed the war — those on the home front had not been asked to sacrifice and share the burden, and therefore the entire weight was on the shoulders of those who were being drafted.

America lost that war largely because the government did not explain itself well to its citizens and the voters turned against it. As Carl von Clausewitz taught, war and politics are intimately intertwined, and we lost the war through losing the politics.

Today, our enemy is a virus, not a hostile alliance. The citizens are being called upon to sacrifice in order to win the battle. The authorities have had their share of mistakes during the initial onslaught of the disease, and citizens have been properly critical.

Let us pray that the improving nature of the response increases confidence and that the mighty power of free citizen-sovereigns will be coordinated in a determined and victorious response to this great challenge. We citizens also must be self-critical and willing to adjust and sacrifice much to achieve this victory. We as a people have done it before, and we are doing it again, willingly accepting the discipline necessary to meet the challenge. We look forward to resuming all our other free pursuits once the battle has been won.