It happened again. One year after Lady Aurelia triumphed in the Queen Mary Stakes at Great Britain’s Royal Ascot, the dainty filly, now 3 years old, won again at Ascot in the King’s Stand Stakes, this time by 3 lengths in 57.54, 1/100 of a second off the track record! Congratulations to Spectator Board member Peter Leidel (below). His horse’s performance this year establishes her as the fastest horse in the world! Lady Aurelia charged past a field of older males to become the first 3-year-old filly to win the race since 2002. Good show! 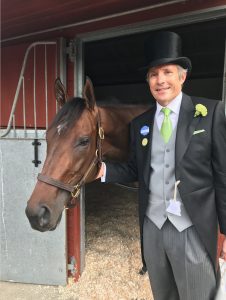 “This is a group 1 with some of the fastest horses in the world, and to duplicate what she did last year. She is a once in a lifetime horse,” said trainer Wesley Ward.

And speaking of fillies, Peter got to meet Prince William, Duke of Cambridge, who presented the trophy, and better still, Catherine, Duchess of Cambridge. Will Peter bring Lady Aurelia to The American Spectator’s 50th Anniversary Gala at Trump International Hotel in Washington? Special seating can be arranged! Join us September 26th to find out.