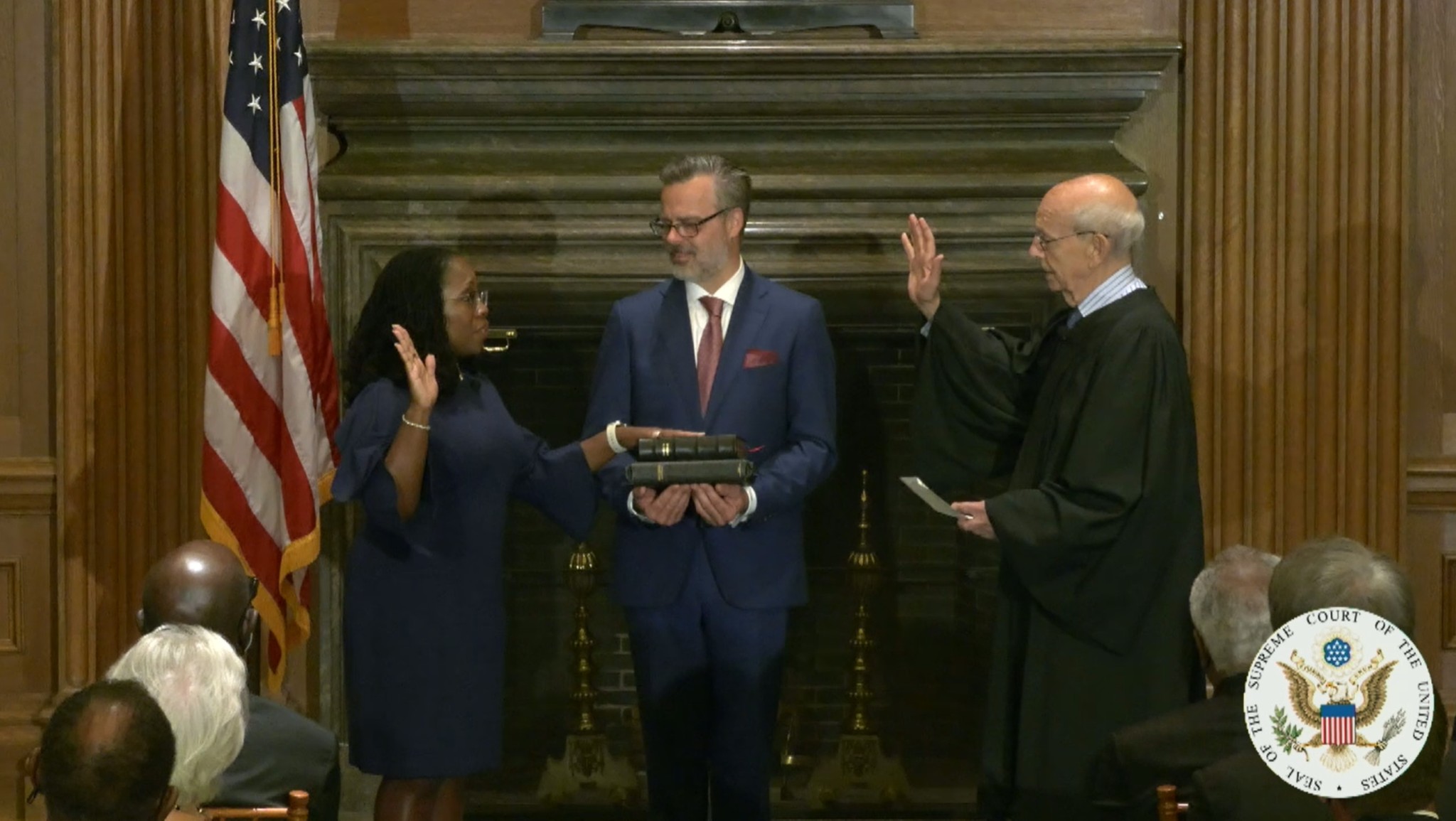 In a small, live-streamed ceremony located in the Supreme Court’s West Conference Room, Jackson took two oaths and officially replaced Breyer on the bench. According to a statement by the court, a formal investiture event will take place at a later date yet to be determined.

Breyer, an appointee of President Bill Clinton, was confirmed and sworn into the court in 1994. He subscribes to the idea of a “living constitution” that develops alongside society, rather than a fixed meaning determined by legislators. In most cases, he is a member of the court’s liberal wing, although he has shown a somewhat more moderate side in regard to religious freedom. Upon President Joe Biden’s assumption of office, many liberal activists pressured Breyer to step down. For a while he demurred, arguing publicly that the court is not a political institution and that justices “are loyal to the rule of law, not to the political party that helped to secure their appointment.” But in January he relented and submitted a letter of resignation, which was made effective upon the swearing-in of his successor.

Jackson’s confirmation to the high court was contentious. Liberal activists touted Jackson’s record as a judge for the district court and on the D.C. circuit court of appeals, and they saw in her an ally on the bench. Conservatives expressed skepticism towards her judicial philosophy for the same reason. Some criticized Biden’s pledge to nominate a black woman, noting that such a promise excluded potentially qualified jurists who were of other races and genders. Brown’s record on the United States Sentencing Commission was also scrutinized. Many on the right criticized her for lenient sentences handed down in criminal cases, with Sen. Josh Hawley (R-Mo.) singling out several cases in which she gave sentences below the recommended level in several child pornography cases. She was eventually confirmed 53-47, with all Democrats voting yes, along with Republican Sens. Lisa Murkowski, Susan Collins, and Mitt Romney.

The ascension of Jackson will not change the ideological balance of the court, since she is widely expected to side with the liberal wing as Breyer did. But replacing the older Breyer with the younger Jackson lessens the odds of the seat opening unexpectedly, possibly under a president with different ideological inclinations. Famously, liberal Justice Ruth Bader Ginsburg declined to retire in 2014, during President Barack Obama’s tenure and a Democrat-held majority of the Senate. That year Republicans took the upper chamber, and in 2016 they won the presidency with Donald Trump. Ginsburg’s death in 2020 allowed for Trump to replace her with Justice Amy Coney Barrett, who has been a critical vote for the court’s more conservative block, especially in recent cases involving guns and abortion.