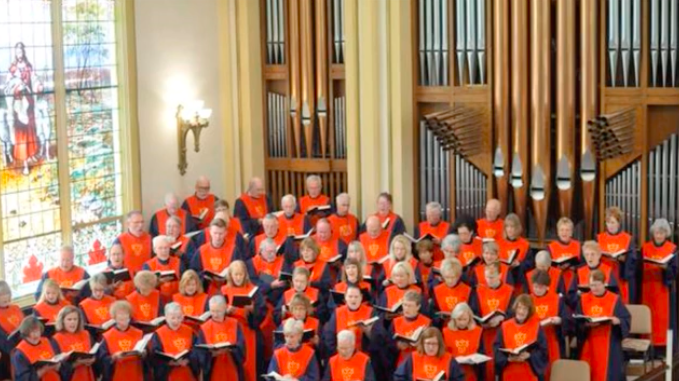 It’s Reformation time again, and you know what that means. Big crowds will fill the pews of Protestant churches on Reformation Sunday. The sermon will probably reference Martin Luther’s nailing the 95 Theses on the Wittenberg church door, and there may or may not be negative words spoken about Catholics in that sermon.

But there is a 100-percent chance that Luther’s great hymn “A Mighty Fortress Is Our God” will be featured. “The Battle Hymn of the Reformation,” it is a soul-stirring and inspirational hymn, and when a full church stands up and belts this number out with trumpets and a big organ behind it, and maybe adds choral descant on verse 4, it makes your spine tingle and you feel a lump rising in your throat and pools of salty liquid in the corners of your eyes.

They even do it at rock ’n’ roll services — singing this 500-year-old hymn backed by electric guitar licks and drum fills brings a different sort of tear to the eye.

Back in the day — three hymnals ago, to be precise — Lutherans in my denomination could sing only one version of this great hymn, only one melody, one set of lyrics. It was hymn 262 in The Lutheran Hymnal, published in 1941. Everybody knew it. Everybody sang it. Most didn’t have to look at the book.

In 1982, a new hymnal came out, largely expunged of anachronistic language by the Thee-Thou-and-Thy Police. It included an “updated” version of “A Mighty Fortress” that, in obeisance to sensitivity and following a slightly different melodic arrangement, stripped the hymn of much of its poetic majesty. Congregations were able to choose between two versions of the hymn in Lutheran Worship, the same basic melody in two variations, one called “rhythmic,” the one in the old book and original to Luther, and one “isorhythmic,” Luther’s tune as adapted by Johann Sebastian Bach. Each variation features its own set of lyrics.

Truth be told, my denomination got off easy in the hymnal revision derby. While our revisers were scouring their rhyming dictionaries for end-of-line rhymes for “you,” “your,” and “yours” (to replace all those “thee’s,” “thy’s,” and “thine’s”) and monkeying with the words of hymns good church members had been singing since they were tykes sitting in their mother’s lap following her forefinger along the lines of the stanzas, PC scolds and heretics in the mainline denominations were bowdlerizing their hymnals of anything that damaged their paper-thin psyches or did not comport with their emasculated theology.

We were spared the furies of the gender gestapo, which took its X-Acto knives to both nouns and pronouns for God. God the Father usually made the cut in these hymnals, but “Lord” got changed to “God” quite frequently, and some revisers made God a “Mother” every once in a while — you know, to balance things out. Jesus frequently moves from “Son of God” to “Child of God,” and, in one hymnal, the angels in “Hark! The Herald Angels Sing” “glory to the Christ-Child bring” instead of bringing “glory to the newborn king,” because kings are both hierarchical perpetrators of oppression and, well, male.

Speaking of which, the word “man,” so ubiquitous to sacred poetry and historic hymn lyrics — it’s in myriad hymns and without fail means “humankind,” both men and women — became an odious noun so repulsive its requisite deletion ruined, or rendered heterodox, countless verses of countless old, historic, famous hymns. Pronouns suffered as well. “His” and “him” for God got broomed, as did any of the traditional nouns for all people; in addition to “man,” “brothers,” “sons,” even “fellows” had to go.

All the usual sensitivities are venerated in these books. Sin is no longer “darkness,” unbelief no longer “blindness,” Jesus’ sacrifice no longer renders us “white as snow.” References to the blind, the deaf, the dumb, and the lame are “sanitized,” or stricken, because of potential hurt feelings, even though readers of the Gospels run into these terms all the time.

And, of course, in many cases military references have been gleefully scrubbed. Nobody of whatever ilk — white, black, brown, yellow, deaf, dumb, blind, lame, male, female, in transition, or otherwise — is “marching as to war” anymore.

Revisers in my denomination saw the errors of their 1982 ways — their obsession to excise the “thee”s and “thy”s from even old standbys reached its nadir when they changed “My Faith Looks Up to Thee” to “My Faith Looks Trustingly” — when they came out with the Lutheran Service Book in 2006. In it, the “thee”s and “thy”s have made a triumphal return and the theology has remained orthodox, but those two versions of “A Mighty Fortress” are still there, and plenty of pastors still choose the “revised” one for Reformation Sunday.

Perhaps they like the melody employed in the alternate version, the “isorhythmic” one. But the addition or subtraction of beats does require alteration of lyrics in some instances, and the altered lyrics of the new version fail to do poetic justice to this magnificent hymn.

Although the most famous and most-used of the 70-plus English-language translations of the hymn were penned by Frederic Henry Hedge and Thomas Carlyle, respectively, Lutherans have typically sung different translations. My brand of Lutheranism has always favored a composite translation from the 1868 Pennsylvania Lutheran Church Book; the new translation, included in the last two hymnals, emanates from the 1978 Lutheran Book of Worship.

But enough setup. Let’s assess the damage. In verse 1, “The old evil foe now means deadly woe; deep guile and great might are his dread arms in fight; on earth is not his equal” in the old version becomes “The old satanic foe has sworn to work us woe; With craft and dreadful might he arms himself to fight. On earth he has no equal” in the new one. The first is majestic and memorable; the second common and forgettable.

In verse 2, “Ask ye, who is this?” in the old becomes “You ask who this may be?” in the new. The clunkiness continues in verse 3, where “Tho’ devils all the world should fill” becomes “Though hordes of devils fill the land,” and “This world’s prince may still scowl fierce as he will” becomes “Let this world’s tyrant rage; in battle we’ll engage.” In the same verse, “He can harm us none” is changed to “His might is doomed to fail.”

Poetic, vivid phrases have been changed to common, pedestrian, and sometimes even ungainly verbiage throughout. But it’s in the fourth verse where the unwieldiness takes on PC contours.

The phrase “And take they our life, goods, fame, child, and wife, though these all be gone, our vict’ry has been won” has been changed to “Were they to take our house, goods, honor, child, or spouse, though life be wrenched away, they cannot win the day.” First, “were they to take” for “and take they”? You’re going to tell me the new one’s better? In addition to being prosaic and hard to sing, “were they to take” reminds me of the “Would that it were so simple” that Hobie Doyle can’t seem to wrap his tongue around in the Coen brothers’ Hail, Caesar!

But the real violation here surpasses poetic taste. In their quest to neutralize the male focus in the lyrics, to undo the parallel construction comparing a man’s “life” with his “wife,” the revisers have reduced the status of women dramatically. No longer will a husband give up his life for his wife; in the sanitized version of “A Mighty Fortress,” he has only to give up his house.

And, as a final insult, the last line is changed from “the Kingdom ours remaineth” to “the Kingdom ours forever!” “Remaineth,” the last word in the last line, must be stricken, not because nobody knows what it means (everybody knows what it means!), but because it ends in “-eth.” And modern people don’t use verbs ending in “-eth” anymore, not even when, a couple of times a year, they sing historic hymns written centuries before.

When it comes to retaining poetic and majestic lyrics to this great Christian hymn, perhaps we can say, à la Luther: Here we stand! We can sing no other.