Kathy Griffin tittered to her photographer Tyler Shields (paraphrased), we’re going to have to run away from this. She knew that holding a bloody, severed head of President Donald Trump was out of bounds. She did it anyway.

Griffin has since apologized. The Twitter mob now calls for Griffin’s head. Metaphorically speaking. They want her to lose her CNN gig with Anderson Cooper.

She’s a leftist. She apologized. All will be forgotten publicly and she’ll be a hero of the Smart Set™ privately who secretly wish they had the courage to go all the way like she did. She’ll be feted.

Kathy Griffin’s dramatic cry for attention through something so shamelessly concupiscent (yes, the idea of killing this President is a major turn-on for many) is welcome. It’s pure in the way that a devil with horns and tail and pitchfork is pure: it’s obviously evil and grotesque. There’s no artifice. There’s no pretending. Ms. Griffin hates President Trump. She hates him enough and feels emboldened enough and defended enough, culturally, in that hate, that she held, as a terrorist would do, the severed head of the President.

Her message’s clarity is a tonic for the hazy malice that infects the body politic.

Contrast Kathy’s hideous display with her co-worker Alisyn Camerota’s serpentine hissing around Governor John Sununu. She cast aspersions and doubts and inferred and implied evil on the part of President Trump and his staff. Camerota’s performance art was far more insidious and does more damage to civil discourse than fifty Kathy Griffin’s primally screaming and severing their way through the presidency they hate.

Camerota covers her “art” in feigned objectivity. She sneers at people who disagree – even those who are her obvious betters, like Governor Sununu. In this case, Sununu would have none of her self-righteous whispers.

Watch the whole thing for a lesson on how to dance with the devil and win:

The media-Democratic-entertainment-education complex thrives in the shadows. Professors preaching hatred in the name of “diversity” and “social justice”, as an example, goes on daily, with tax dollars, behind closed doors. Threatening a conservative student’s grades and future employment can’t be seen but it happens. Casting agents purposefully cutting conservative actors and tradesmen out of jobs happens in places no one sees.

The left is being less subtle, of late, and it’s past time to be out with it. May leftist ideology come to its natural conclusion: murdering the ideas, and they hope, the people who hold those ideas dear.

Kathy Griffin’s art experiment carried this thought process to its logical end. (Well, not all the way to the end. All the way would have meant holding President Trump’s actual bloody head.)

Entitled students, screaming at their white professors (who cower obsequiously, hoping that the alligator eats them last) is the pure, unadulterated outcome of the slimy bigotry their professors taught them. It’s beautiful in its barbarous aggression. The students have literally become the masters.

What should happen? Well, in a just world, these students would be expelled, Kathy Griffin shunned into exile at an old folks home, and CNN’s reporters would be replaced with balanced on-screen talent.

But like at Middlebury College, where students attacked Charles Murray and the liberal professor trying to have a conversation with him, these students will be indulged. Kathy Griffin’s pathetic career will limp along another day. CNN talking heads will spew their invective.

Kathy Griffin should be thanked, at least, for being open about her aims. Her boldness gives the violent game away.

The CNN host, Griffin, these students, and the terrified administrations who enable them, represent power through force, intimidation, aggression, and murder.

Calm exchanges of ideas no longer happen, because one side believes their side is the righteous side. The same zeal that animated towns people to burn the witch, animates the true believers on the Left. The only way to save the sanctity of the community is by eliminating the apostates. More and more people are becoming apostates. The illiberal professors are dismayed to learn this the hard way. 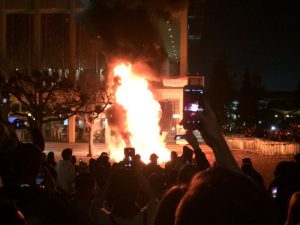 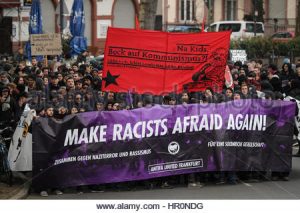 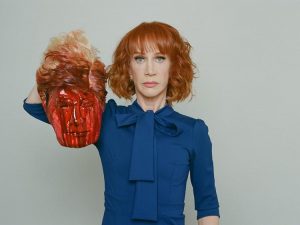 Kathy Griffin should be thanked for making the covert, overt. Her image beautifully reveals the truth of the ideology espoused on the Left: submit or die.