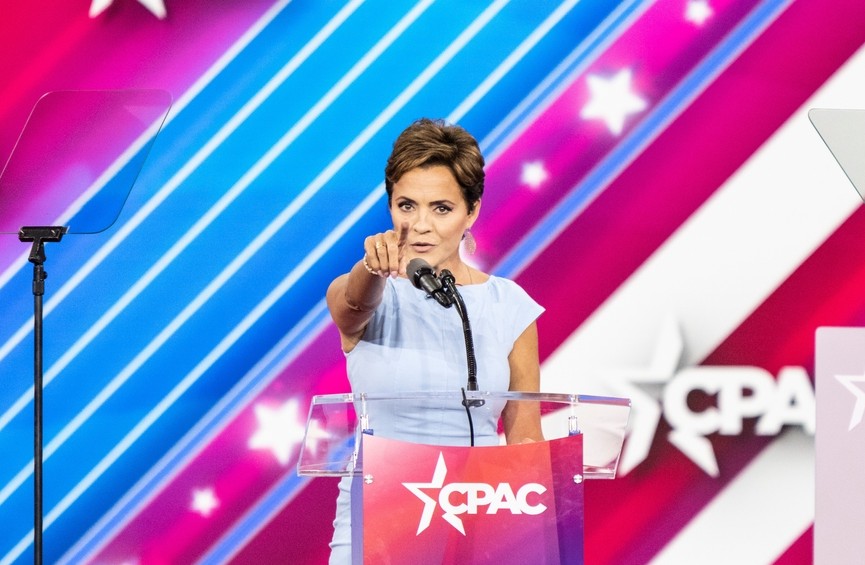 Historically, the way to become governor of Arizona is to be elected secretary of state, available to ascend to the mansion when a governor dies in office or resigns to take a federal job (or is impeached or indicted). The Democrat candidate in November’s contest for the open governor’s seat (Doug Ducey, the current governor, is term-limited out) boasts that “qualification”; Katie Hobbs is currently secretary of state.

The Republicans, however, have gone off-script this cycle. Rather than handing the nomination to a party pro, party voters, like a basketball coach, took a long look down the Republican bench, saw all the old-hand political players eager to get into the game, shook their heads no, and climbed into the bleachers to snag their gubernatorial candidate.

Kari Lake was pulled directly from her anchor chair in a local television newsroom in an attempt to keep the Arizona governor’s office red in a state that is getting bluer by the year.

She received virtually no primary support from party pros — the sitting governor, Ducey; national figures, such as the former vice president, Mike Pence, and the former New Jersey governor, Chris Christie; and other establishment hands all endorsed her opponent, former Arizona Board of Regents member Karrin Taylor Robson. Lake was outspent by Robson 17 to 1 in the primary, and she is currently being outspent 7 to 1 by Hobbs in the general election. Lake has eschewed traditional consultants; has no campaign manager; enlists as campaign staff true believers, 20-something Trumpers; and hasn’t tapped into the big-donor circuit.

And she’s ahead by a little over a point in the RealClearPolitics aggregate poll.

But also credit former President Donald Trump, who endorsed her in the primary and stood at her side in a Sunday afternoon rally in the Phoenix suburb of Mesa. And, moreover, credit the Trump-inspired template of populism, in which a firebrand arriviste to politics can vault to political prominence by exuding charisma and energy and a fighter’s desire to return America to what it once was.

Lake, 53, grew up in Iowa, one of nine children and the daughter of a schoolteacher. She studied journalism at the University of Iowa and bounced around a few newsrooms before landing on the anchor desk at KSAZ, Fox 10, where she entered Arizonans’ living rooms as a trusted voice on a nightly basis for 22 years.

Credit the Trump-inspired template of populism, in which a firebrand arriviste to politics can vault to political prominence by exuding charisma and energy and a fighter’s desire to return America to what it once was.

In early 2021, Lake resigned her anchor post, citing concern about the direction of today’s journalism and advocating for “more balance in coverage” and “a wider range of viewpoints.” In a video announcing her departure from Fox 10, she said that she was no longer proud to be a journalist and that she felt that the media was driving “fear and division” in the country. Three months later, she was running for governor.

Republicans are hoping she can hold the fort in a state that has been purpling at an alarming rate and that augurs to be a critical toss-up venue for the 2024 presidential election. A mere six years ago, Trump carried the state by 3.5 percent and two Republicans sat in the U.S. Senate. By 2020, Arizona had gone for a Democrat presidential candidate for the first time since Bill Clinton’s run in 1996, and both U.S. senators were Democrats.

Lake is hitting some of the common Republican points in campaign 2022. She is attacking Hobbs on border security — a topic close to home in Arizona — and hitting her on taxes and spending.

In what was largely a post-primary hit piece, the New York Times listed Lake’s “transgressions”: She said the 2020 election was corrupt; she maintained that “electronic voting machines were not ‘reliably secure’”; she “rallied against vaccine mandates”; she opposed letting biological males use female bathrooms, and vice versa; she went all in on Second Amendment rights; and, after the FBI raided Mar-a-Lago, she said, “Our government is rotten to the core.”

That was the New York Times but could have been a Lake media buy.

Her opponent, Hobbs, as are many Democrats this cycle, is eager to turn Lake’s America First positions into a negative and make the midterms about what Hobbs and the Left term “MAGA extremism.” She trots out the dog-whistle leftist accusations that Lake is a conspiracy theorist, an “election denier,” and a “threat to democracy” rather than engaging in discussion of the myriad political disasters that are currently afflicting the country due directly to actions made by her party and her president: inflation and the economy and gas prices and border insecurity and supply-chain problems and catastrophic COVID lockdowns, among a plethora of other issues. Hobbs wants to talk about what polls high on Democrats’ list of concerns, of which abortion is top of mind.

As a result, Lake is frequently confronted about her pro-life stance. When pressed on her support of Arizona’s pre–Roe v. Wade abortion law, passed over 50 years ago, that bans all abortions, she said that she wants to save “as many lives as possible” before slipping on a pair of eight-ounce gloves strengthened in a career of on-air journalistic pugilism to take it to the reporter.

What I really want to know, and I’ve been waiting, I tune into you guys all the time, I want to know where Katie Hobbs stands. I never hear you guys ask her that…. Let me tell you where she stands. She supports abortion right up until birth and after birth. She supports that if a baby survives a botched abortion that that baby [should] die on a cold metal tray. And none of you ever try to get her to talk about her stance.

Sen. Ted Cruz posted a video of the exchange, commenting, “This is how it’s done.”

Lake would ask Hobbs to her face, but Hobbs refuses to debate, possibly because Lake is quick on her feet and with a jab. This is the first time in 20 years that Arizona voters will be deprived of the chance to see gubernatorial candidates face off onstage. The official Hobbs refusal is, as David Catron categorizes it in The American Spectator, a “word salad”: “Unfortunately, debating a conspiracy theorist like Kari Lake — whose entire campaign platform is to cause enormous chaos and make Arizona the subject of national ridicule — would only lead to constant interruptions, pointless distractions, and childish name-calling.” (READ MORE: Democrats Are Afraid to Debate GOP Opponents)

Lake gives as good as she gets, and then some. She said, “To be honest, I’m not entirely thrilled with the idea of sharing a debate stage with a twice-convicted racist like Katie Hobbs.” Hobbs, while minority leader of the state senate, was found guilty of racial discrimination against staff.

Although in a statistical dead heat with Hobbs at the moment, Lake got good news a few days ago when the Republican Governors Association announced that it would offer her more media support in the remaining weeks before the November election.