by Daniel J. Flynn
“Yesterday, I was proud to host a gathering on Black maternal health with groups fighting to ensure that Black mothers have the support they need. Black women are facing a maternal mortality crisis ― we must act.” (February 19, 2020; Office of Senator Kamala Harris/Wikimedia Commons) 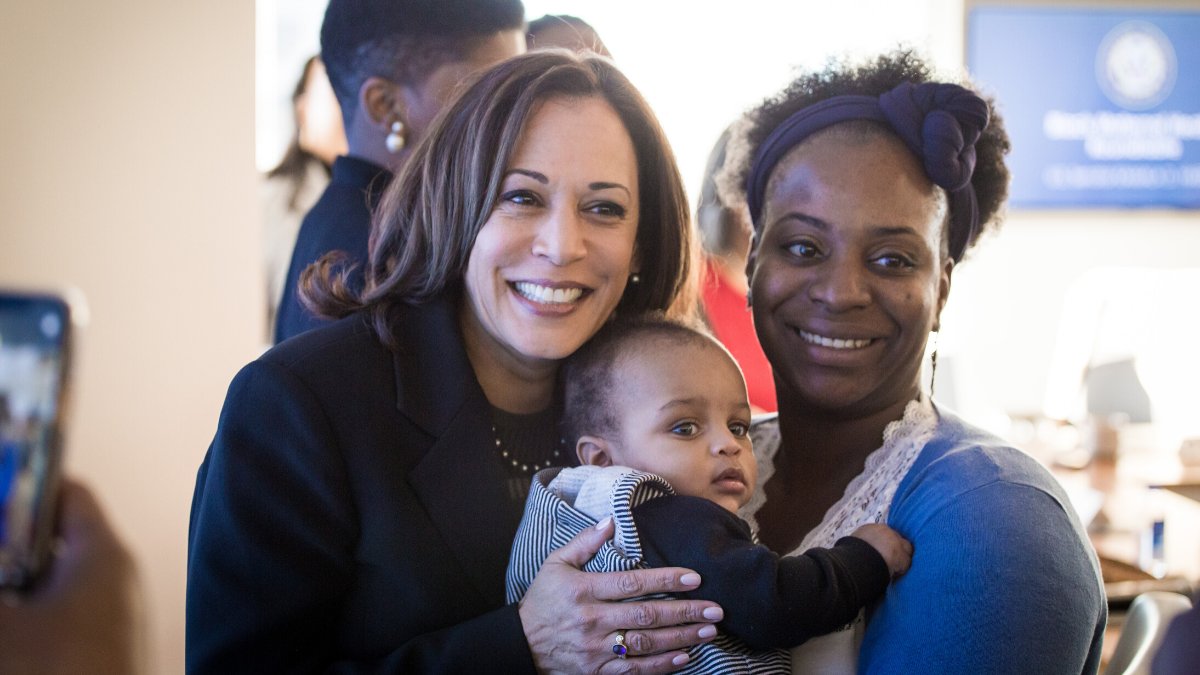 Joe Biden announced Kamala Harris as his running mate on Tuesday. Despite the freshman senator’s deficiencies exuding personal warmth vis-à-vis the others on his shortlist, the former vice president chose Harris over Nurse Ratched, Almira Gulch, and Alexis Colby.

Except Joe Biden did not really choose. Hashtags did. When the waitress limits your order to the top left corner of the trifold menu, do you or does your waitress select what you eat for lunch? #MeToo and #BlackLivesMatter hashtagged Biden into excluding almost 95 percent of the adult population to pick from a shallow pool of African American women.

Except Kamala Harris is as much an African-American woman as she is a white woman as she is an Indian American. Her heritage, like so many Americans, proves more complicated than that simplification, which partly explains why she felt compelled to emphasize her parents marching for civil rights during a CNN interview on Tuesday. Central casting called for a black woman, so she plays one on TV even if her life does not mesh with the African-American experience and her diverse background dilutes her strength among that core Democratic constituency. Her biracial father emigrated from Jamaica. Her mother hails from India. Both earned advanced degrees. She grew up in Berkeley, and then, during her middle school and high school years, in Montreal. (Maybe blacks can relate to her cheering on the Habs?) She married a white corporate lawyer — infusing her household with Jewish, Hindu, and Christian religious traditions — shortly before her 50th birthday. She did graduate from Howard University and, like many black women, date Willie Brown. So, there’s that. If she does not specifically energize black women, at least she energizes women.

Except she does not. The central unifying experience for women remains motherhood to a real, flesh-and-blood human being rather than sisterhood in an abstract, academic ideology. Just one in six American women exit their child-bearing years without ever reproducing as Harris did. But she can still hang her hat on serving as an exemplar of feminist virtues.

Except she cannot. More than a quarter-century ago, a twentysomething Harris started dating a sixtysomething Willie Brown. Maybe it was his height (he’s five-foot-two) or his hairline (he’s balder than pre-plugs Biden). Perhaps Brown’s status as a man without attachments (he was and is technically married) attracted Harris. Just don’t say the BMW or the patronage “jobs” he gave her that netted her $400,000 over five years awarded Kamala Harris eyes for the then-speaker of the California state assembly. She’s not that type of girl. And plenty of 29-year-old women find short, balding, 60-year-old, married men attractive. Just ask plenty of short, balding, 60-year-old, married men. They will tell you. Surely those years as a professional woman foster an affinity between Harris and the working class.

Except Kamala Harris cannot relate to the work life of the 87 percent of Americans who do not draw an employment check directly from government. Remarkably, the CVs of both ends of the Democratic ticket display no real work experience in the private sector. Yes, Joe Biden famously squared off with Corn Pop when employed as a lifeguard one summer (Was that a government job, too?) and briefly worked in a politically connected private law firm more than a half century ago. But Kamala Harris went straight from law school to the Alameda County district attorney’s office and climbed the government ladder from there. Even her college internship saw her working for Sen. Alan Cranston. What do they know of government who only government know? Still, Americans can appreciate her middle-of-the-road outlook; the New York Times characterizes her as “a pragmatic moderate” and a Washington Post columnist calls her “a small-c conservative,” after all.

Except her actions contradict their words. GovTrack ranked Harris as the most left-wing senator in its analysis of 2019 votes. She wants free health care for illegal aliens, suggests “parallels” between Immigration and Customs Enforcement (ICE) and the Ku Klux Klan, and regards abortion as a constitutional right but gun ownership as something less than that. If she cannot win the voters’ affection, at least Kamala Harris can win her own.

Except she cannot. Politics forces Kamala Harris to portray a character called “Kamala Harris.” The genuine article possesses a beautiful genetic tapestry of humanity who, like everyone else, contains a mass of contradictions — Does she pay reparations for her slave-owning ancestors or receive them on behalf of her enslaved forebears? — and reorientations, e.g., she wanted to preserve private health insurance before she wanted to abolish it before she wanted to preserve it, she played a tough prosecutor before morphing into a BLM marcher, etc. People aren’t as black-and-white as politics has become.

Except the Kamala Harris we see on TV is. She’s like the people Democrats want her to persuade to vote for Joe Biden, only more so. The real, warts-and-all Kamala Harris, whoever she is, strikes as more compelling, more human, more likable than that prefabrication.

Except that Kamala Harris long ago concluded that you can be yourself or you can win office, but you can’t do both. Elections remain popularity contests. Madam Five Faces is not winning one anytime soon.