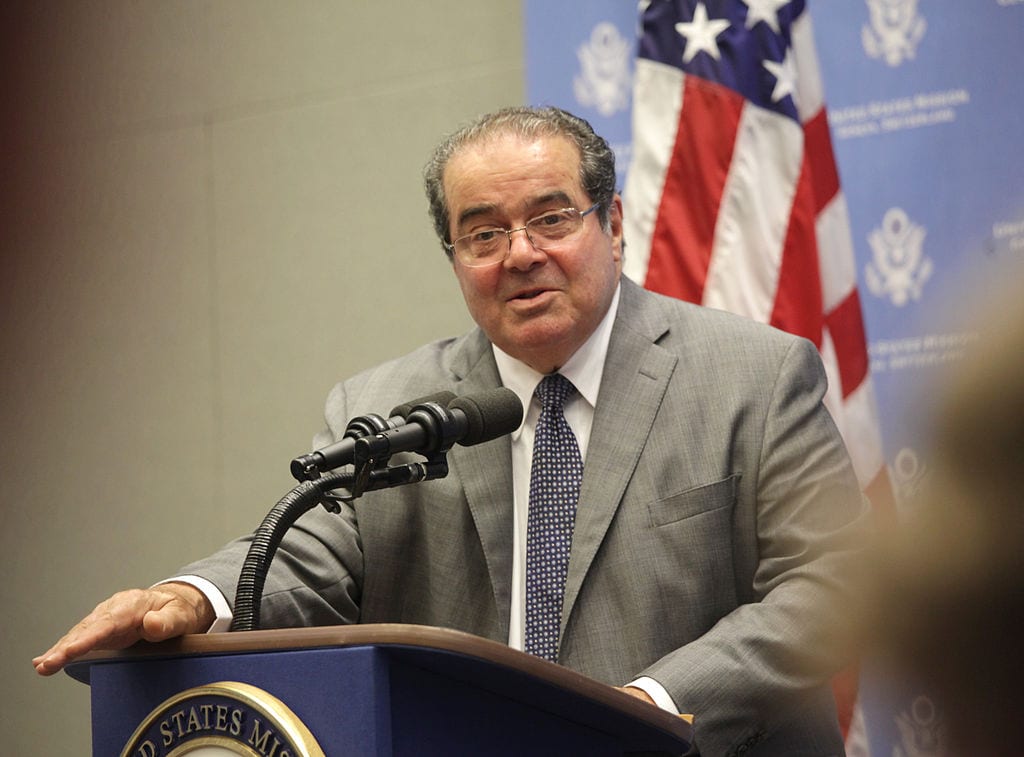 Divinely inspired text may contain the answers to all earthly questions, but the Due Process Clause most assuredly does not.

The Court today continues its quixotic quest to right all wrongs and repair all imperfections through the Constitution.

Alas, the quest cannot succeed — which is why some wrongs and imperfections have been called nonjusticiable.

Scalia was not baiting his fellow justices with his “alas.” What person of good faith does not wish to right every wrong and imperfection? He was, rather, saying to them that the desire to right wrongs is in itself not sufficient to justify the court’s great power, and that in fact, with the best of intentions, it can damage the society it seeks to benefit and the laws of which they are the final arbiters.

Scalia turned to a rabbinic text for many reasons. As a practicing Catholic, he had a deep respect for the religion from which his own sprang. As a legal scholar, he had a deep respect for an ancient legal tradition with a vast literature that is still alive. On a personal level, Scalia participated annually in a New York seminar on Talmudic and American law, and had close and friendly relations with the brilliant, scholarly Chassidic rabbi who coordinated the event.

There is a deeper level, as well, as one might expect with a mind as singular and a career as consequential as Scalia’s. Appreciation of Jewish law has been a hallmark of the conservative tradition of English and American law since its inception. Scalia’s use of the teaching from Avot here is perfectly in tune with how Jewish law has been used historically by these conservatives — as the bedrock upon which the concept of limited powers is founded.

Sir John Fortescue, deemed the founder of this stream of thought by Yoram Hazony, served as chief justice for Henry VI in 15th-century England. In his books, Fortescue pointed to the Deuteronomy texts that indicate that the king, too, is subject to the law. Implicitly, if this were true for a king of Israel with a mandate directly from G-d, how much the more would it apply to those whose violent grabs for power had plunged England into the chaos of the War of the Roses? Kings in England, as well, had to obey the law and respect the constitutional liberties ancient English law safeguarded.

Two centuries later, the magisterial John Selden had time to launch into extended Talmudic study when he was thrown into the Tower of London for facing down Charles I with the Petition of Right. In that turbulent age, Selden saw that people everywhere were becoming absolutists, claiming divine sanction for their political ideas to be imposed on the nation. Selden’s scholarship led him to distrust absolutism of any sort, not just of the kings with their claim of absolute divine right but also of those thinkers who were beginning to propose that on the basis of reason alone one could dispose of institutions and traditions and establish binding law.

No, said Selden. Men’s sense of what is self-evident differs wildly and cannot serve as a true basis of governance. One need only sample most of the political conversation online today for evidence. Much of the rhetoric boils down to, “It is self-evident that my program is right.”

What is serviceably self-evident for establishing human law? Selden believes those are only those things that have passed the test of time in the laboratories of the laws of nations. Hazony and Ofir Haivry summarize Selden’s judgment:

Of these [time-tested traditions], the most reliable is that of the Talmud, which describes the seven laws of the children of Noah prohibiting murder, theft, sexual perversity, cruelty to beasts, idolatry and defaming God, and requiring courts of law to enforce justice. The experience of thousands of years has taught us that these laws frame the peace and prosperity that is the end of all nations, and that they are the unseen root from which the diverse laws of all the nations ultimately derive.

On this basis, Selden confronted the great crisis of the Church of England at the Westminster Assembly. Convened to decide the future of the Church of England, it was at first dominated by the Presbyterian party, which wished to do away with the bishops and have the church led by congregationally elected bodies. This, they claimed loudly, was self-evidently the divine will. Opposing them was the Episcopal party, who defended the Church’s traditional structure as also being a matter that was self-evidently divine law.

With his parliamentary skills and incomparable scholarship, Selden said nay to both sides. The presbytery and the episcopate are institutions that human beings have used to work out their commitments. Only the Seven Laws are binding everywhere, along with the obligation to be faithful to our commitments. The only peaceful way to work this out is to respect how we have already been working this out, and then see where there is common ground beneficial change that will have deep and lasting support.

One hundred years after Selden, Edmund Burke (who called himself a Seldenian) warned Britons against jumping on the French Revolutionary bandwagon. Let’s see where it is going first, he said. Britain did not follow Reason into the Terror. But because most of the American revolutionaries made their appeal to the liberties guaranteed under law, Burke was warmly supportive of their cause in Parliament.

Scalia was a modern link in this great chain of legal thinking. The working of the Divine in our human politics is a restraining influence, calling us to humility and an empirical caution when exercising power. Scalia’s deep respect for Jewish sources as current and relevant stands as an essential part of this tradition. Modern absolutists are busy peddling their utopian wares, and anti-Semitism, raw or subtle, seems to be a part of what they are peddling. The sense of deep and respectful restraint that Jewish law teaches is anathema to such absolutism. It always has been and always will be. Scalia and the tradition his thought represents embrace the true power of self-restraint: we allow each other our freedom under the broad canopy of a basic order, and then, without hate, find our way forward together.