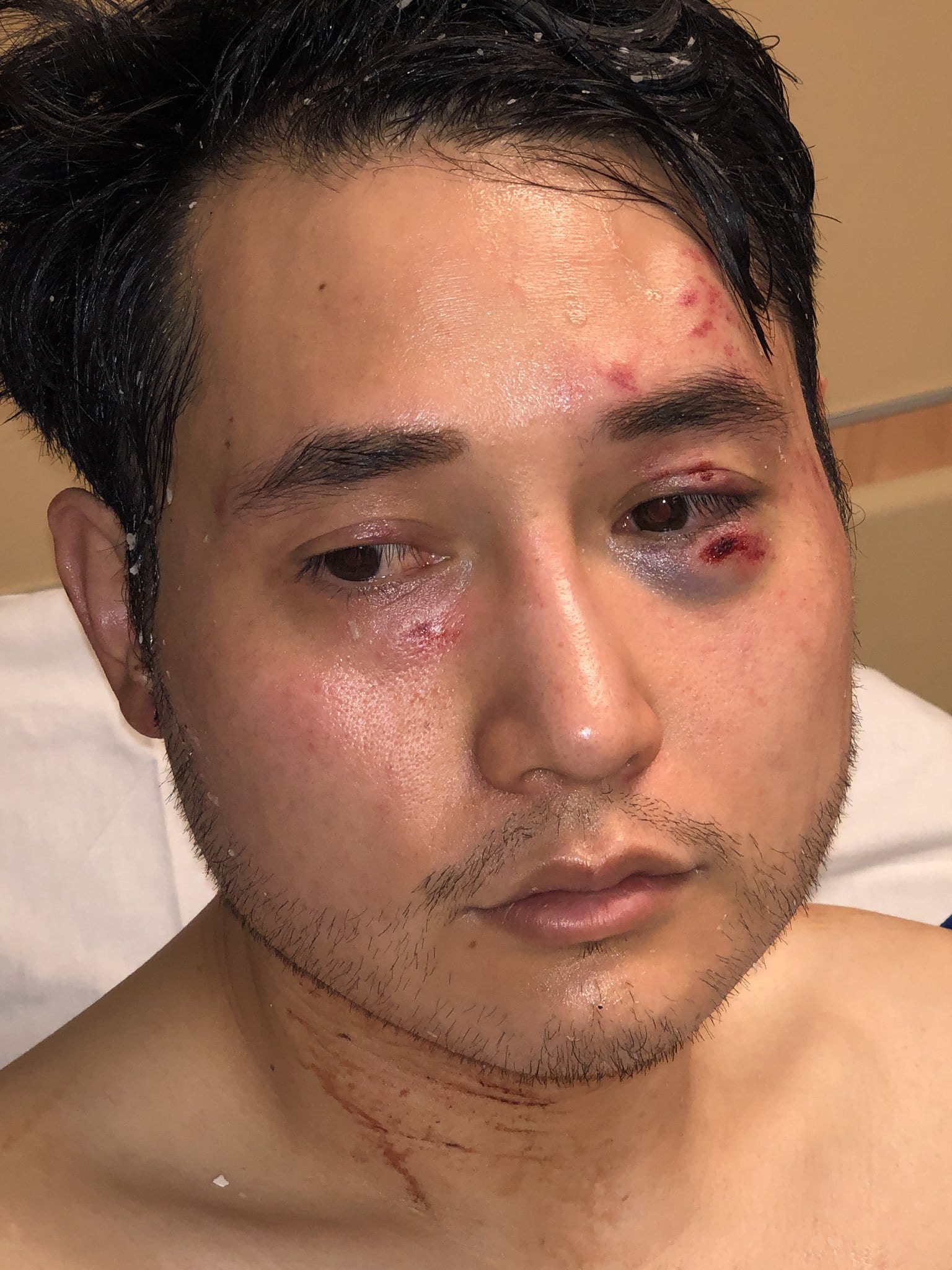 Andy Ngo, a journalist covering a clash between far-right and far-left demonstrators in Portland, was sent to the ER after being surrounded and beaten by members of Antifa on Saturday. Ngo was punched in the head, covered with silly string and eggs, and struck with milkshakes that Portland PD later claimed were filled with quick-drying cement. Ngo’s camera equipment was stolen by a member of the group, which can be observed in this video. Ngo was recognized and attacked because of his history of documenting Antifa’s actions in Portland.

In both videos, Ngo can be seen walking among Antifa demonstrators with his camera out before he is rushed by a masked horde cloaked in black. The entire assault is captured; it happens in an instant. One Antifa-affiliated demonstrator, in disguise, pulls Ngo’s camera away from him. Ngo is then sucker-punched by another masked protester, who quickly backpedals in retreat. The crowd closes in; Ngo covers his head. He is kicked, sprayed with silly string, hit with milkshakes, and pelted with eggs. Taunts and profanity can be heard. Ngo makes his way from the street, trying to protect his head as the mob behind him cheers.

Andy Ngo was beaten for covering an anti-fascist protest against a demonstration by the far-right nationalist group known as the “Proud Boys.” Antifa and the Proud Boys alike have a history of promoting violence. A member of the Proud Boys threatened Portland’s mayor in January, and group members have participated in a number of street fights, some of which have led to arrests. Antifa also advocates the use of force against their political enemies, often clashing with right-wingers during counter-protests. Both groups embrace violence and were active participants during the “Unite the Right” white supremacist rally that took place in Charlottesville in 2017.

Antifa members wear black and cover their faces, arguing that such measures are necessary to be effective in their mission. Their stated aim is to prevent the spread of fascism. This is not the first time, however, that Antifa members have targeted observers. They rose to prominence for protesting speaker Milo Yiannopoulos at UC Berkeley, starting fires and causing approximately $100,000 in collateral damage in the process.

In a video from October 2018, which later went viral, members of the group can be seen accosting a driver during the protest of a police shooting that left 27-year-old Patrick Kimmons dead. Antifa representatives from the branch “SmashRacismDC” also gathered outside Fox News host Tucker Carlson’s home in November 2018; a video taken by one observer shows them chanting “We know where you sleep at night.”

There is an ideological explanation for why Antifa members attack bystanders. Per the Rose City Antifa website FAQ, “Failing to stop fascists from speaking — that is, giving them the opportunity to organize to impose their agenda on the rest of us — makes you as bad as them.” Antifa’s philosophy equates bystanders with fascists, marking anyone that does not overtly support them a threat and thus a target.

Worse than a bystander, though, is a critic of Antifa.

Andy Ngo is one such critic. He and the Rose City Antifa organization are familiar with one another. A resident of Portland, Ngo had previously described himself as “hated by Antifa” on his Twitter page, and has documented their activities in the past. In May, Ngo doxxed one of their members. “Doxxing” is a contemporary term that refers to publicly revealing someone’s personal information online without their consent. Some have argued that Ngo did so with malicious intent; he claimed the member’s identity was relevant to the story he was writing.

Antifa’s retaliation consisted of labeling Ngo, who is gay, a fascist. Ngo had been accused of promoting Islamophobia after contributing an article to The Wall Street Journal in August 2018. He was condemned for race-baiting by a London resident who disputed the claims he made in this op-ed. These claims, in conjunction with the doxxing of an Antifa member, led the group to identify him as a danger. Ngo was aware of this, announcing his intent to cover the demonstrations the night before on Twitter and noting that he had been singled out in Antifa’s message for physical confrontation.

Ngo claimed that nearby police officers did not step in to help him. Portland police have come under fire in the past for leniency in dealing with Antifa; Mayor Wheeler, a Democrat who also holds the title of Police Commissioner, was accused of instructing Portland Police officials not to respond to ICE requests during the Occupy ICE protests that took place on June 17, 2018. Mayor Wheeler strongly denied the accusation, claiming he was expressing a desire for his department to not be drawn into an engagement on behalf of a federal agency he thought “was on the wrong track.”

As of writing, Mayor Wheeler has made no statement about the harassment of Andy Ngo or the protests that occurred in his city.

Ngo has become a national figure since the video of his assault went viral. Michelle Malkin, a friend of Ngo’s, set up a GoFundMe crowdfunding page to raise money for Ngo’s medical expenses and to replace his stolen equipment. At the time of writing, the page has raised $122,000 on Ngo’s behalf. According to a statement from a legal representative, Ngo is currently recovering in the hospital after suffering from a brain hemorrhage.

The lack of action by Oregon’s elected officials and police are a disappointingly — and dangerously — tepid response to Antifa’s actions against Ngo. It remains to be seen if this violence will create a violent backlash by opposing forces or prompt the government, state-level or national, to address it.