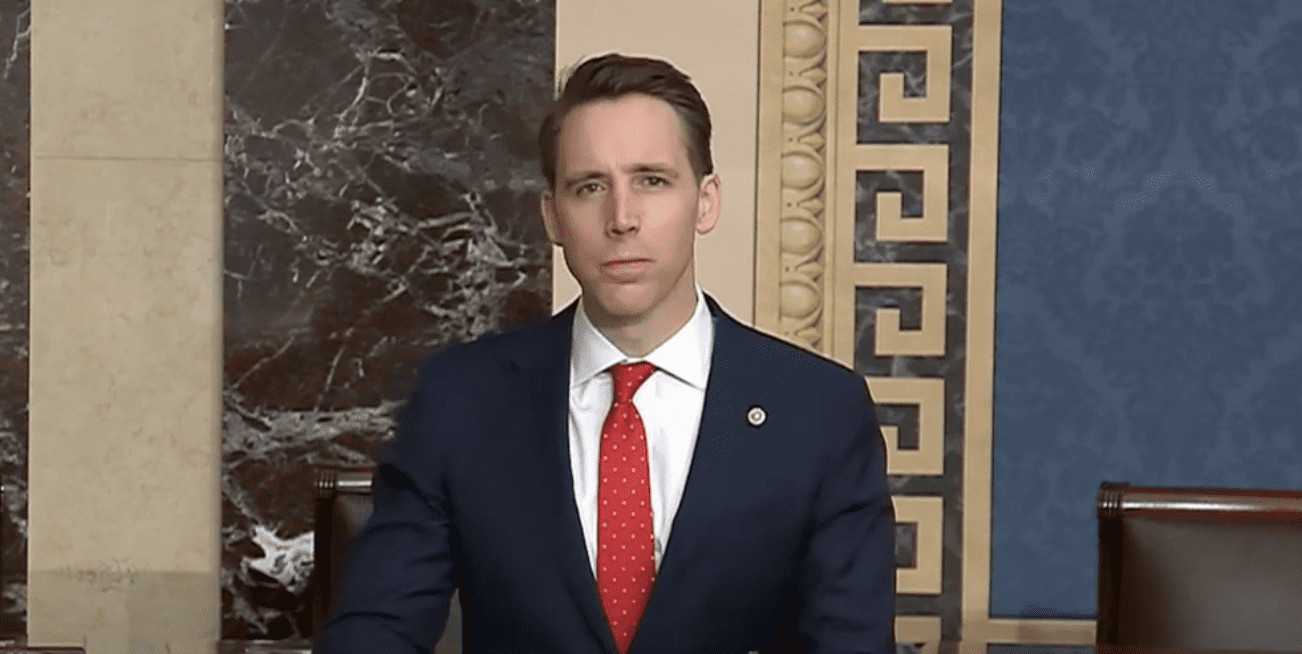 Watching the news nowadays, it seems clear that a massive new set of political fault lines are opening up both in Washington and abroad, centered on the issue of the U.S.’s relationship with China. President Trump is fighting a political proxy war with the Chinese Communist Party over influence in the World Health Organization. Leading conservative pundits like Tucker Carlson and Sean Hannity denounce Beijing almost nightly to audiences of millions. The words “New Cold War” are mentioned with increasing frequency and alarm in media outlets across the political spectrum.

To Sen. Josh Hawley (R-Mo.), who gave a dramatic speech on this subject on the Senate floor on Wednesday, the New Cold War has been raging for a while — and he wants to be the man to prosecute it.

It seems probable that 2020 will one day be remembered as the year that Washington rearranged itself into pro- and anti-China camps in preparation for an emerging great power rivalry.

Hawley, a Senate freshman, has already found plenty of infamy during his short time on the national stage, mostly by picking fights with giants. The Goliaths of yesteryear were the tech companies, for whom Hawley has been the most implacable pro-regulation voice in Washington. Now that America is in the midst of an outbreak from China and a historically unprecedented economic contraction, questions of social media addiction seem almost quaint, and Hawley’s focus has shifted to yet larger targets.

Hawley’s remarks on Wednesday, the transcripts of which are available on his website, are perhaps the most systematic case made against the U.S.–China relationship by any national elected official to date. He defines the threat posed by China in full-spectrum terms: economic, cultural, military, and ideological. Crucially, he argues that the outcome of this New Cold War will ultimately be determined by trade policy and manufacturing, and ends by imploring his colleagues to vote to leave the World Trade Organization (WTO), which by his reckoning is “a symbol of an economic order whose Wilsonian ambitions have cost this country dearly, enabling and empowering the rise of an imperial China.”

Putting aside the feasibility of his proposals for a moment, policymakers in Washington would do well to pay attention to Hawley’s analysis of the U.S.–China strategic situation. Anyone who doubts that hard power flows from a solid manufacturing base should pay attention to China’s own military leaders. An interview published earlier this month by the Global Times, featuring a retired general of the Chinese People’s Liberation Army, addresses the question of manufacturing in stark terms: “This is the problem of the United States today. It has high technology, no production methods, and no production capacity, so it has to rely on Chinese production.” With only a service-based economy and without manufacturing, the general asks, “who supports your high technology? Who supports your dollar? Who supports your US military?” He then asserts that China is ready to “resolve the Taiwan issue by force at any time.”

In the midst of the COVID-19 crisis, the general’s words feel almost like gloating. The U.S.’s eroded manufacturing base was put on stark display these past few months when the American government was caught flat-footed in its pandemic response. China, which makes half of the world’s masks, made sure to hoard plenty of equipment for itself while American states and European countries fought each other over what little was left. How much leverage would China have if the West ever finds itself with an urgent need for military supplies?

Lines in the sand

It seems probable that 2020 will one day be remembered as the year that Washington rearranged itself into pro- and anti-China camps in preparation for an emerging great power rivalry. If so, then Hawley’s efforts may well be seen as one of the foremost catalysts for this transformation. Yet denunciations of his speech came swiftly: Reason, the leading libertarian magazine, derided it as a limp attempt to win nationalist kudos, while pro-globalization organizations like the Peterson Institute, a Washington think tank, called the proposal to leave the WTO “absurd on its face.” China, perhaps more than any other political issue, has made it clear that the laissez-faire and populist factions of the Republican Party are headed for a crack-up.

China hawks can expect reluctance from Democrats, some of whom have made a point of defending China’s interests directly or indirectly. The recent publication of documents pertaining to the Russiagate conspiracy included the revelation that former National Security Adviser Susan Rice believed that Michael Flynn was a Russian asset because he worried too much about China and not enough about Russia. Max Baucus, retired Democratic senator of over three decades and the Obama administration’s ambassador to China from 2014 to 2017, compared the China-wary mood in Washington to Hitler’s persecution of political dissidents; his words were quickly republished by a CCP mouthpiece in an article praising him for “speaking up against hate speech targeted at China.”

And presumptive Democratic presidential nominee Joe Biden does not mention a single specific policy aimed at China on his campaign website — the most he offers is a vague platitude about “working with our allies to negotiate” — and in fact goes out of his way to lambast President Trump’s trade policy.

American mainstream media has also been a great boon to Chinese interests, most notably during the early stages of the pandemic when copious amounts of headline space was spent helping to push the CCP’s claim that Trump’s rhetoric on COVID-19 was motivated by racism.

Still, Sen. Hawley has plenty of allies in Washington. Trump seems to agree with him on the direction, if perhaps not the specific degree, of America’s response to China’s imperial ambitions. A bill to delist Chinese companies from American stock exchanges, currently moving at “warp speed” through Congress, shows that there is at least some general appetite for the kind of economic decoupling that Hawley has been advocating for. Many of Hawley’s colleagues in the Senate, most notably Tom Cotton (R-Ark.), Ted Cruz (R-Texas), and Lindsey Graham (R-S.C.), have also been active in proposing legislation to push back against Chinese influence.

A call to action

Even the biggest China hawk must concede that Hawley’s proposal to leave the WTO is a political impossibility. Similar proposals in 2000 and 2005 were defeated by crushing majorities in the House, and Hawley’s bill is dead in the water with Finance Committee Chairman Chuck Grassley (R-Iowa) opposed to it. Simply walking away from the world’s largest trade organization would also certainly be detrimental in many ways to the United States.

Yet credit must be given to the Missouri senator for going further than anyone else in Washington in arguing that communist China is more than just an economic competitor that ought to be prodded to “play by the rules.” Rather, Hawley says, it is an existential threat that the United States must be prepared to challenge by all available means. Only time will tell how many of Josh Hawley’s warnings come to fruition. But if there is indeed a New Cold War facing the world, then men like Hawley ought to lead.