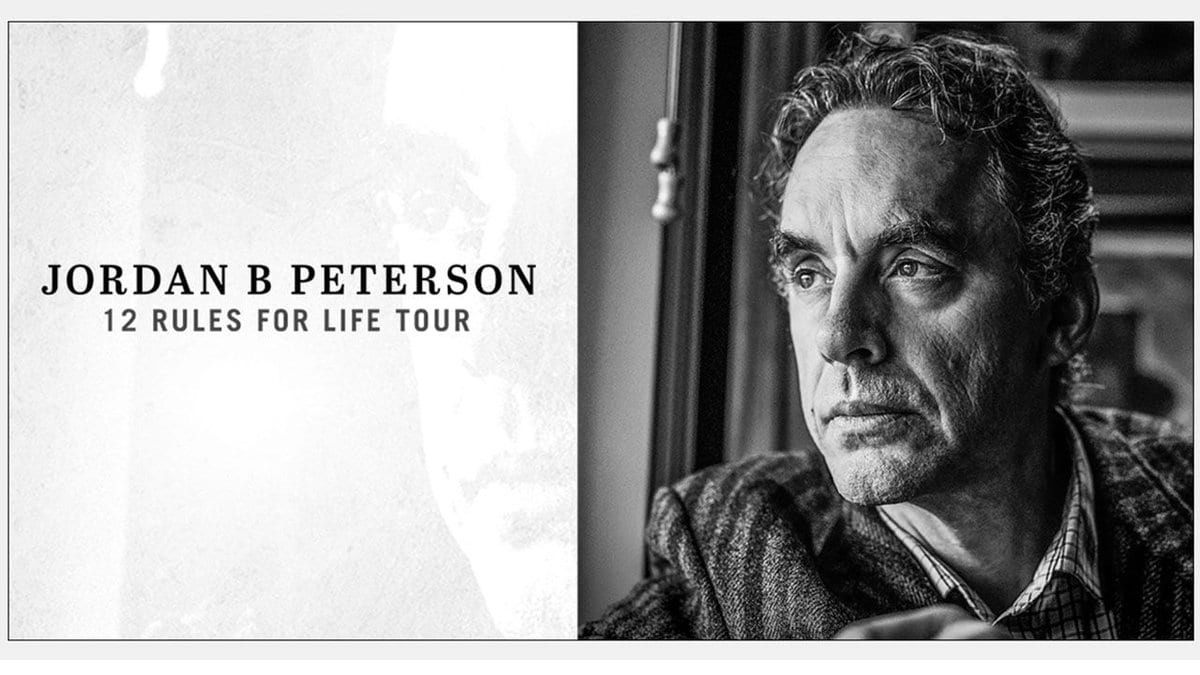 On a steamy Houston evening, hundreds of Jordan Peterson fans lined up to hear the Canadian psychology professor speak in a venue normally filled by indy rock bands, glazed eyes, and singing banshees. Not this night. The Revention Center hosted a bright group of mostly-white young men, high on big ideas.

Dave Rubin, who introduced Peterson asked him, joking, during the Q&A session, “What’s it like to be the representative of angry, white men?” Peterson responded with a sly smile, “Pretty great, actually.”

Pretty great, indeed. Twenty-four hundred people sat in too-small folding chairs, shoulder to shoulder for two and half hours of Socratic lecture. To start, Dr. Peterson discussed discernment and hierarchy and the importance of both. He illustrated the proposition of helpful hierarchy with a story of his very bad plumber who did a shoddy job and produced piping with 38 leaks. There were better plumbers, with better reputations, and probably got paid more because they had built a reputation for being the best and deserved to be atop the plumbing hierarchy. In capitalism, there are many such hierarchies:

Okay, now, having said that, you can look at the post-modern or the Marxist critique of hierarchies and the basic critique of hierarchy is something like, “All hierarchies are based on nothing but power.” Well, this is absurd. Some hierarchies are based on power sometimes. That’s a whole different claim because you know, once you set up a hierarchy of competence, this happens in corrupt countries with university diplomas. You can bribe your way into a university diploma. That’s the corruption of the hierarchy. It’s the transformation of a hierarchy that should be based on competence and it’s warped by power, the gaming of the system. And so as a hierarchy deteriorates, and ossifies, and becomes corrupt, then the raw expression of power becomes a more reliable way of getting to the top. And the ultimate expression of that is a tyranny.

Don’t accept that. If you think about plumbers again, it’s a pretty good example. It’s not like the successful plumbers are oppressing you, making your appointments. It is helpful. You might ask about the plumbers who just can’t cut it, who are at the bottom of the hierarchy? It’s like, well, if you don’t want to be knee-deep in sewage, then it’s a reasonable screen. It’s reasonable form of discrimination. But no one talks about that. Because we’ve lost the sense that there could be reasonable forms of discrimination.

But discrimination and thinking are the same thing. To think is to discriminate between things. [Applause.]

Okay, so we don’t want to be stupid about hierarchies. We want to notice that they’re necessary. We want to predicate them on competence. That’s the sign of a just and properly functioning society. It’s meritocratic in relationship to the hierarchy. The plumbers who are the best at installing plumbing pipes get to rise to the top.

And I would also say, and I think there’s evidence for this, …is that the multiplicity of hierarchies we have in the West are mostly functioning and you can tell that because things work.

This was the teaser, really, setting the plate for the real question of his talk. Peterson had been noodling some ideas about this question: How do we know when the Left goes too far? He made the point that on the right, everyone knows Nazis are evil. They’re something bad and something we don’t want to be and this moral judgment was clearly illustrated at the Nuremberg Trials, but that there is no such limit on the Left.

Dr. Peterson did something at the Houston talk he hadn’t done before to answer the above question. He’s been asked by a European publisher to write the preface to Aleksandr Solzhenitsyn’s The Gulag Archipelago. To test the ideas, he read the newly formed thoughts to the Houston audience word for word. It took up nearly an hour. One was left hoping for more rhetorical exposition on his 12 Rules book and less reading but still, the concepts that Peterson touched on were profound and prescient considering the #resistance crisis facing America.

Thus, the doctrine of group identity and victimizer/victim, inevitably ends with everyone identified, and rightly so, as an oppressor, as someone contaminated by bourgeois privilege and prosecuted without mercy for it. No mercy for the oppressor. But the oppressor is each of us because none of us deserve the advantage bequeathed upon us by favors of history.

There’s much more, of course, but that’s the gist. And so, to attempt to answer the central question that Peterson left unanswered: How does one define acceptable boundaries on the Left? When does the ideology become dangerous? Is it AntiFa’s lock hurling goons? Is it Black Lives Matters activists shooting cops? Is it a gay couple ruining a family business or else forcing them to violate their conscience? Is it the enforced “correct-think” that pervades Hollywood, academia, and the media, and now, increasingly, commerce?

The Left has never been called to account for the atrocities done in the extreme of their name: Marxism. As Peterson points out, professors can, with impunity, profess their love for Marxism. Why are Nazis (rightly) labeled anathema but communists march proudly, teach in state schools, and are never called to account for the evil done in their name? When the “oppressed” become the oppressors, why do the “compassionate” look the other way and why are they allowed to?

Dave Rubin said something at the beginning of the talk as a throwaway line that grabbed my attention. He said, “There is a revolution but it’s an idea revolution…” All revolutions, though, are ideas-based, and at the heart of all the bloodshed is a fight for certain ideas.

One gets the impression that those on the Left, the ones lying down on the floor at Publix, the ones freebasing in Starbucks bathrooms, the ones killing cops, the ones shooting Congressmen playing baseball, the ones shrugging when decent people are forced out of business, the ones reporting the wrong-think on Twitter, the ones sneering at those who cling to their God and their guns, are fully committed to the extermination of their opposition by any means necessary. The brazenness of branding half the country as racist and privileged is whole-scale dehumanization and a daily occurrence. It’s the foundation of Marxism.

Yet, to Dr. Peterson’s point, no one has defined a limit to Marxism. Even as a failed ideology, marred by the blood of millions, Marxism persists as an acceptable belief system. The precepts of envy, power, and ultimately, violence continue unchecked and ignored.

The Q & A session at the end of Peterson’s talk ended with a rousing standing ovation. He professed astonishment and gratitude for the unlikely situation that thousands of people would show up to hear an intellectual share his ideas. It fills him with hope.

While listening to the talk, it felt a bit like Peterson was preaching to the converted. The real problem for the West didn’t sit in this hall and it doesn’t even consist of tear-gas wielding AntiFa activists. It consists, like it did in Lenin’s Russia and Mao’s China, of the masses who don’t see themselves as potential oppressors or even as oppressed, but went along with the worldview of those who did, and didn’t realize, until it was too late, and then they faced a choice: either submit or die. And likely, even submission wouldn’t save them.

Hopefully, the few in that room are the beginning of an awakening and not the last remnants of those who possess discernment.