More Politics
Sign Up to receive Our Latest Updates!
Register
Hot Off
The Press
Laughing Matters
Hey Conservatives, Stay on Twitter
by Itxu Díaz
Cultural Decline
The Valley of the Dead
by Matthew Omolesky
Asia
China’s ‘World-Island’ Ambitions
by Francis P. Sempa
Arts and Letters
For Artists, a Hidden Win in the COVID-19 Relief Bill
by Daniel Grant
Drawn to Humor
The Silencing Fathers
by Patrick Cross

Last week, industry executives from Johnson & Johnson, including J&J Vision North America President Peter Menziuso, conducted meetings with legislators on Capitol Hill to “deliver a message to Congress about eye care, patient safety and the importance of ‘in-person vision care’ provided by optometrists.” They focused the bulk of their energy on influential members, such as Sen. Bill Nelson (D-Fla.) and Reps. Bob Latta (R-Ohio) and Michael Burgess, MD, (R-Texas).

“Helping people safeguard their eyesight is our top priority at Johnson & Johnson Vision,” Menziuso said in a J&J statement. Unfortunately, this claim couldn’t be further from the truth. Johnson & Johnson could care less about our vision safety. In truth, the company only cares about padding its bottom line, strangle holding its competition to extort more profits for itself at the expense of the American people. Legislators like Sen. Nelson and Reps. Latta and Burgess should think twice before complying with the wishes of this selfish, anti-free market organization.

Today, J&J boasts over 40 percent of the world’s contact lens market share — not because of standout performance, but because the company possesses a government-created monopoly as a result of its cozy relationship with optometrists. Eye care professionals are unique in that they sell what they also prescribe. J&J has an edge over its competitors because it gives optometrists handsome kickbacks on every sale of its Acuvue lenses, causing many eye doctors to make this the default choice for their brand-specific prescriptions.

Last year, J&J spent significant amounts of time and money lobbying for the passage of the Consumer Health Protection Act (CLCHPA), a federal bill that would have essentially removed many of the free market reforms brought to the industry in 2003. Before this time, eye care professionals were allowed to coerce patients into purchasing lenses directly from their offices by refusing to provide them with copies of their prescriptions. The Fairness in Contact Lens Consumers Act (FCLCA) mitigated this problem by making it against the law to withhold while cutting down on the amount of time eye care professionals have to strike down third party lens sales. However, the new bill that J&J is heavily advocating for would undo much of this reform effort by effectively banning discount lens sellers, giving optometrists the ability to pocket-veto transactions by simply declining to ever give a “yes” or “no” answer on the filling request.

At the same time, the company also implemented minimum pricing restrictions on its lenses to increase costs by up to 35 percent. Why? Laura Angelini, president of Johnson & Johnson Vision Care, bluntly answered the question: “This gives the optometrist the ability to improve his or her capture rate in the office. Now the patient has no incentive to shop around.” So much for being a consumer-based organization. Thankfully, this price-fixing was dropped last year as a result of bad press and numerous lawsuit threats.

Today, J&J’s priority has transitioned to stopping ocular telemedicine, which is allowing consumers to, in conjunction with the sign-off of a virtual, board-certified ophthalmologist, measure their own vision prescriptions with smartphone and tablet apps from the comfort of their own homes. This technology is making it possible for consumers to visit the eye doctor’s office as infrequently as once every two years for a comprehensive eye exam as opposed to once every time a new prescription is needed. This should not be a controversial issue, as even the American Optometric Association (AOA), which often partners with Johnson & Johnson in its lobbying efforts, admits that visiting an eye care professional once every 1-2 years is all that is necessary for healthy adults.

By advocating for the CLCHPA and against ocular telemedicine, J&J claims that they are only looking out for the eye safety of consumers, as they allege less frequent visits to the optometrist’s office induces a much higher risk of developing keratitis and other eye infections. They don’t have any evidence to back up their claims, and the reason is obvious: eye safety doesn’t really matter to the company; it’s merely a talking point that’s being peddled to fear monger policymakers and the public. If J&J is truly concerned about our eye health, why, then, does the company happily put its Acuvue lenses in vending machines overseas, where no prescriptions are required to purchase lenses? Below is one example from Lithuania, where J&J’s Acuvue lenses are displayed prominently in the first two rows of the dispensary: 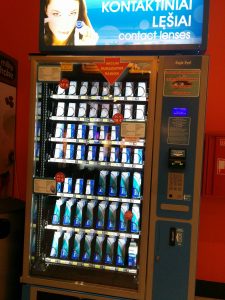 J&J’s intent on regulatory capture is clear as day, and yet the billion-dollar company’s executives have the audacity to pose as humanitarian activists by lobbying legislators to stop perfectly good technology that has slashed prices and improved consumer access to healthcare. On the state level, the company had Rep. Kevin Ryan in Connecticut and Sen. Frank Ciccone/Rep. Rob Jacquard in Rhode Island introduce bills that would, in effect, ban the use of ocular telemedicine. Similar bills have also appeared in South Carolina and New Mexico, but were thankfully vetoed by Nikki Haley and Susana Martinez, the respective governors at the time.

Now, J&J is coming back and focusing its efforts on the federal level. On June 19, thousands of AOA representatives are expected to knock on Capitol Hill office doors to lobby for their special interest priorities. It’s important that targeted legislators like Sen. Nelson and Reps. Latta and Burgess separate facts from fiction so that the influence of a government-created monopoly is not expanded at the expense of free market competition and affordable healthcare.