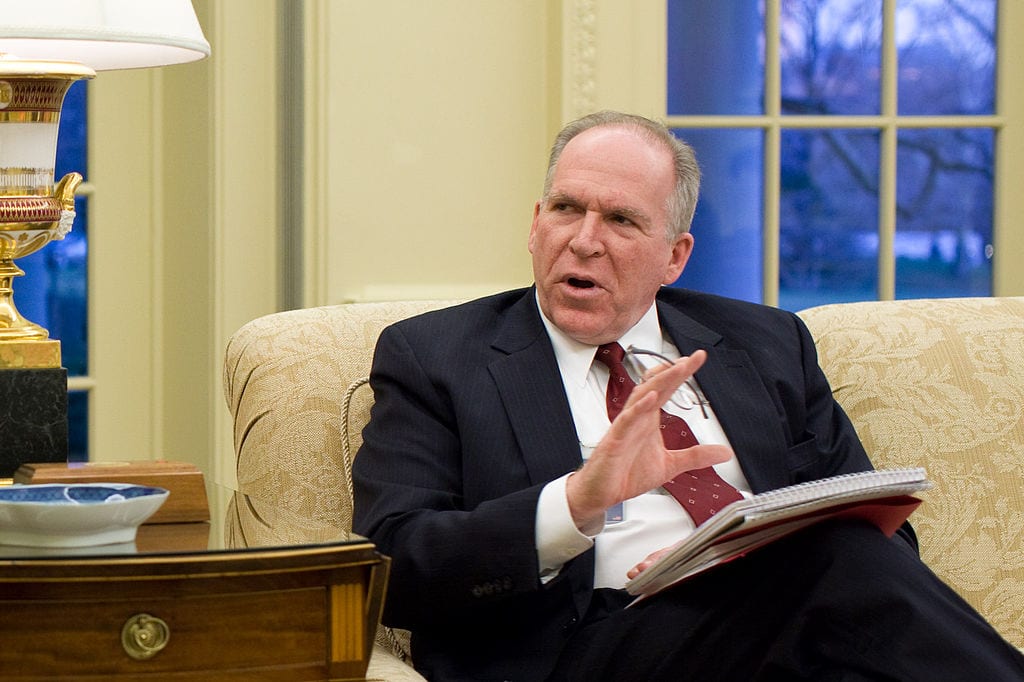 It was the Russian revolutionary Leon Trotsky who coined the phrase the “dustbin of history.” To his political opponents, he sputtered, “You are pitiful, isolated individuals! You are bankrupts. Your role is played out. Go where you belong from now on — into the dustbin of history!”

It is no coincidence that John Brennan, who supported the Soviet-controlled American Communist Party in the 1970s (he has acknowledged that he thought his vote for its presidential candidate Gus Hall threatened his prospects at the CIA; unfortunately, it didn’t), would borrow from Trotsky’s rhetoric in his fulminations against Donald Trump. His tweet last week, shortly after the firing of Andrew McCabe, reeked of Trotskyite revolutionary schlock: “When the full extent of your venality, moral turpitude, and political corruption becomes known, you will take your rightful place as a disgraced demagogue in the dustbin of history. You may scapegoat Andy McCabe, but you will not destroy America… America will triumph over you.”

America will triumph over a president it elected? That’s the raw language of coup, and of course it is not the first time Brennan has indulged it. In 2017, he was calling for members of the executive branch to defy the chief executive. They should “refuse to carry out” his lawful directives if they don’t agree with them, he said.

Trump has said that the Russians are “laughing their asses off” over the turmoil caused by Obamagate. No doubt many of the laughs come at the sight of Brennan, a supporter of Soviet stooges like Gus Hall, conducting a de facto coup from the top of the CIA and then continuing it after his ouster. Who needs Gus Hall when John Brennan is around? This time the Russians don’t even have to pay for the anti-American activity.

Another hardcore leftist, Samantha Power, who spent the weeks after Trump’s victory rifling through intelligence picked up on his staff, found Brennan’s revolutionary tweet very inspiring. “Not a good idea to piss off John Brennan,” she wrote. Sounded pretty dark and grave. But not to worry, she tweeted later. She just meant that the former CIA director was going to smite Trump with the power of his “eloquent voice.”

Out of power, these aging radicals can’t help themselves. They had their shot to stop Trump, they failed, and now they are furious. The adolescent coup talk grows more feverish with each passing day. We have a former CIA director calling for the overthrow of a duly elected president, a former attorney general (Eric Holder) calling for a “knife fight,” a Senate minority leader speaking ominously about what the intelligence community might do to Trump (“they have six ways from Sunday at getting back at you,” Schumer has said), and assorted former FBI and CIA officials cheering for a coup, such as CNN’s Phil Mudd who says, “You’ve been around for 13 months. We’ve been around since 1908. I know how this game is going to be played. We’re going to win.”

In all this unhinged chatter, the partisan origins of Obamagate become clearer. The same anti-Trump hatred on display in their tweets and punditry drove the political espionage. James Kallstrom, the former FBI Assistant Director, notes that the “animus and malice” contained in Brennan’s tweet is “prima facie exposure of how he felt about Trump before the election.”

All the key figures in the decision to open up a probe on Trump wanted him to lose — from Brennan to Peter Strzok, whose anti-Trump machinations included, according to the latest batch of texts with his mistress, plotting to manipulate a buddy on the FISA court. In one text, he wonders if he can finagle a meeting with his friend by inviting him to a “cocktail party.” The impropriety aforethought on display in that tweet is staggering, but of course the media has paid no attention to it, preoccupied as it is with Andrew McCabe’s retirement income.

McCabe, by the way, has removed all doubts about his capacity for partisan lying with his post-firing statement, which rests entirely upon it. With all of its anti-Trump special pleading, the statement reads like it was cobbled together by Rachel Maddow. Like so many other ruling-class frauds, McCabe seeks absolution for his perjury and leaking through liberal politics. I stand with the liberal powerful against Trump, you can’t touch me — that’s the upshot of his defense. Comey has taken the same tack. The title of his forthcoming book should be: How the Law Doesn’t Apply to the Self-Appointed Ruling Class.

What an amazing collection of entitled creeps, who long ago convinced themselves that the “rule of law” is identical to what they see as their sacred right to exercise power in any way they see fit. All the blather about Trump’s violation of the law is simply a projection of their own lawlessness. So far the coup has been thwarted. They had hoped to stop him in the campaign through political espionage. But that didn’t work. Then they tried to upend him through spying during the transition, holding out hope until the very last moment, as evidenced by Susan Rice penning her sham exculpatory note only after Trump’s swearing-in. Now they join Brennan in seeking to bury Trump in Mueller’s dustbin.

Trotsky would have understood the shorthand of all the tweets, polemics, and posturing perfectly. Nothing in this show trial bears any relationship to reality or justice. It is simply an expression of power politics, which doesn’t always end well for its exponents. As even an old Gus Hall supporter like John Brennan must know, and perhaps his fulminating panic indicates a dawning awareness of it, those who talk the loudest about their enemies heading for the ash heap of history often end up in it.