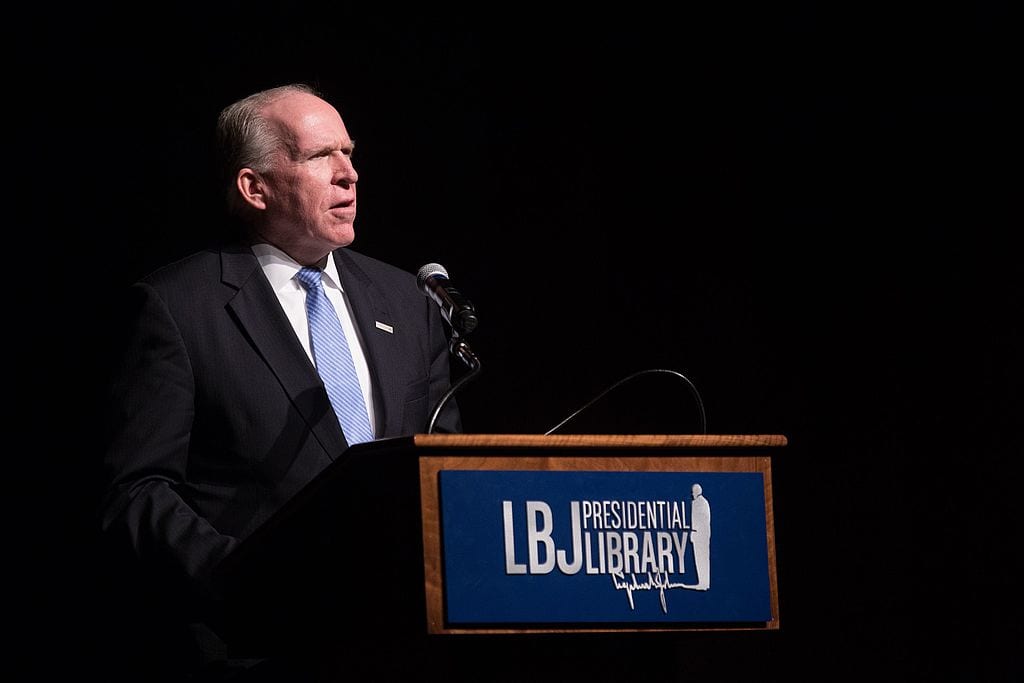 The media talks endlessly about “norms,” then lionizes leftists who shatter them. John Brennan is a beneficiary of this gross hypocrisy. The more he engages in monstrously abnormal and irresponsible behavior for a former CIA director, the more the media builds him up.

Imagine a former CIA director under a Democratic president calling for members of the executive branch to defy his lawful directives, blithely spreading grave charges against him without evidence, and calling on the “country” to “defeat” him. The media would treat that figure as a dangerous weirdo. But Brennan has done all of that and more, and it has only enhanced his appeal in the eyes of the media.

“A Spymaster Steps Out of the Shadows”—that’s the New York Times’s idea of a hard-hitting take on a former CIA director who is calling in effect for insurrection. In the first paragraph of this essentially friendly, punch-pulling profile, we learn that Brennan refuses to recognize Trump as a duly elected president:

A few days before, Brennan wrote an op-ed calling Trump “a snake-oil salesman.” The paper’s editors tried to persuade Brennan to use the word “president,” but Brennan refused. “I said no, I’m not going to refer to him as ‘president,’” Brennan told me. “Because he doesn’t deserve that, in my mind. Yes, he won the most electoral votes. But I think he has demonstrated, over and over again, that he is unfit to carry out the responsibilities of that office.”

Naturally, the Times doesn’t find it troubling that a former CIA director would throw such a juvenile snit. Yet it is one of the few revealing tidbits in the piece and it captures Brennan’s low, demagogic complex: he is a political hack who never outgrew his revolutionary youth and is trying to rekindle it through a coup against Trump.

The author of the piece went out to dinner with Brennan and his brother, and the outing just turned into an evening of trivial Trump-bashing:

The Brennans ordered mussels and steaks. Mike got half a rack of ribs. By the time the food came, the talk had turned to Trump. Mike said he had heard a story about the Trump Organization stiffing a friend of a friend on a sizable landscaping bill.

Almost all of Brennan’s criticisms of Trump are non-substantive or revolve around differences of opinion on policy that Brennan dishonestly casts as issues of character. In the end, Brennan is just an entitled left-wing revolutionary, who calls himself “non-partisan” while plunging into partisanship, accuses others of “unethical” behavior while exempting himself from ethics, and prattles on about the “rule of law” while violating it at the highest levels of government. It is forever Watergate for Brennan, even though he is the one who spied on political opponents and is now covering it up.

According to the profile, Brennan as a young boy dreamed of entering the priesthood and rising to the chair of St. Peter:

He read about the popes and noticed that there had never been an American one. He decided that he would be the first. “If you’re going to be a priest, why not aspire to be the highest priest there is?” he told me.

He had to settle for the directorship of the CIA under Obama, where his imagined rectitude took the form of trying to take out Trump. The piece portrays Obama and Brennan as two peas in a pod, an unusually close relationship between a CIA director and a president. (Brennan calls himself “non-partisan” on his Twitter account, but somehow that didn’t stop Brennan from donating the most amount of money allowable to Obama in 2008.)

Brennan tells the Times that his grandfather was a “supporter, an affiliate, say” of the Irish Republican Army, as if that’s a very charming family story. But Brennan’s rebellious tastes ran more toward the Muslim Brotherhood, and we learn from the piece that he played a large role in Obama’s tribute to radical Islam in his infamous Cairo speech.

Brennan’s vote for Gus Hall is dispatched quickly — his support for the Soviet-controlled American Community Party at the height of the Cold War was just a reaction to “Watergate,” you understand. The piece gives Brennan more of a hard time about his support for the Bush-era drone program, but doesn’t really push the issue. In order to make any sense of Brennan’s self-serving blather about his involvement in it, you just have to accept his premise that liberals can never do anything wrong. They aren’t to be judged, you see, by the same standards as Republican drone-strikers. When Brennan killed innocents, he cared; Trump doesn’t. According to the piece, Brennan dropped a drone on an American hostage. Oops. But Brennan isn’t going to beat himself up about it, since war “is awful for those who had to make the tough decisions and who have to live with the results.”

The irony of Brennan’s career culminating in the very secret military strikes and political espionage he once condemned is lost on him. He is still searching for “Watergate heroes,” as he put it in a recent tweet. He has returned to the revolutionary ramparts of his youth, convinced more than ever that nothing is treasonous for a leftist.