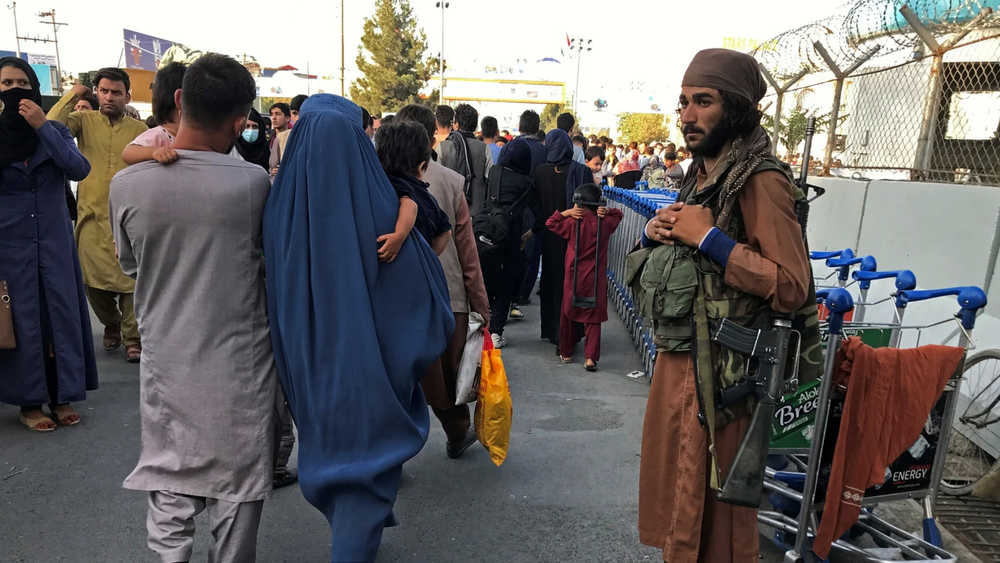 The United States launched a just war in Afghanistan 20 years ago in response to 9/11. Somewhere along the way it became a foolish war. Certainly after Navy Seals assassinated Osama bin Laden in Pakistan a decade ago, the just interests of the United States did not involve a landlocked nation halfway around the world surrounded by mountains and Stans neither as spectacular as Musial nor amusing as Freberg. But we remained. That decision to stay, not the one to withdraw, hurt America most.

The manner of the exit, of course, accounts for a large portion of this disaster. Did anyone bother to go over logistics with the president? We evacuated our people with guns first and left our people without guns behind. Logistics contains the word logic, and this out-door queue’s sequence possessed none of that. It was out of order, which explains the disorder.

The withdrawal method here owes neither to Clausewitz nor Sun Tzu but to Biden’s Archmere Academy classmate Big Red (a legendary figure every bit as real as Corn Pop), who invented the popular “pull and pray” method sometime during the 1950s. From the look of those C-17s—within the fuselage, on the wings, in the wheel wells—we maybe did not pray hard enough.

The substance barely eclipsed the spin in its disastrousness. After emulating the cause of all this by hiding out all weekend the way bin Laden did in caves, Biden refused to answer questions on Afghanistan during a press conference and then turned to a member of a past Democratic administration to conduct a rescue-me interview.

He defensively told ABC’s George Stephanopoulos that “no one’s being killed right now.” When asked about Afghans falling off a C-17, he responded: “That was four days ago, five days ago.”

After eight years as a presidential understudy, Biden expected the Barack Obama treatment. The courtier press he received during the campaign came because journalists hated Trump, not because they loved Biden. Regarding him as more archangel than seraphim, journalists now strike at him, but with pillow-fists rather than the Trump mallets.

Still, Biden ducks them (perhaps because they strike at him at all). His number of interviews constitute 18 percent of the ones granted by Donald Trump at this point in his presidency and just eight percent of the ones granted by Obama. His average number of press conferences per year ranks lower than every president since Ronald Reagan. He does not deal with hostility as well as Trump because he doesn’t deal with hostility (until now). Maybe he could call Facebook and Twitter to suppress the Afghanistan story the way they suppressed the true story of his son’s laptop. It worked before when he found himself in a jam.

This kills people. Worse still, it kills a narrative. The insurrection in Kabul finally kills the prolonged news cycle fixating on the “insurrection” on Capitol Hill. Although bearded and stepping out of another century like QAnon Shaman, the Afghan insurrectionists already show themselves beyond the diabolical tactics—stealing Nancy Pelosi’s stationery, placing a Make America Great Again hat on a statue of Gerald Ford, posing for a picture with a purloined rostrum in the rotunda—of our insurrectionists. It reminds Americans again of the extremists worth worrying about.

Nothing went right for Biden. Ultimately, when looking at the big picture, he did the right thing.

We expended over a trillion dollars and lost the lives of almost 2,500 soldiers, sailors, airmen, and Marines in Afghanistan. Spending another dollar or losing another life did not serve to punish those who orchestrated 9/11 or stop those who sought to orchestrate another one. Our blood and treasure spent over the last decade went to propping up a regime in the name of the people even though the regime clearly did not enjoy the support of the people. Democracy-building, especially when done at gunpoint, usually contains this self-defeating irony. Perhaps those frustrated by bombs and bullets again not transforming tribal Muhammadans into New England-style town-meeting members at last learn a lesson, even if it tells them to invade Sweden next time instead.

This president did what his immediate predecessors needed to do but did not, albeit in a callously incompetent way.

In his actions and rhetoric this week, Biden rejected the utopianism of George W. Bush’s second inaugural, which claimed: “The survival of liberty in our land increasingly depends on the success of liberty in other lands.” But he found good company in another George and in other predecessors.

“Why quit our own to stand upon foreign ground?” George Washington asked.

“[P]eace, commerce, and honest friendship with all nations,” Thomas Jefferson held, “entangling alliances with none.”

“Wherever the standard of freedom and Independence has been or shall be unfurled, there will her heart, her benedictions and her prayers be,” John Quincy Adams said of the United States. “But she goes not abroad, in search of monsters to destroy. She is the well-wisher to the freedom and independence of all. She is the champion and vindicator only of her own.”

We went to Afghanistan imagining we could make them more like us. We leave it, a year removed from troglodytes beheading statues and destroying public art here at home, realizing that we became more like them.