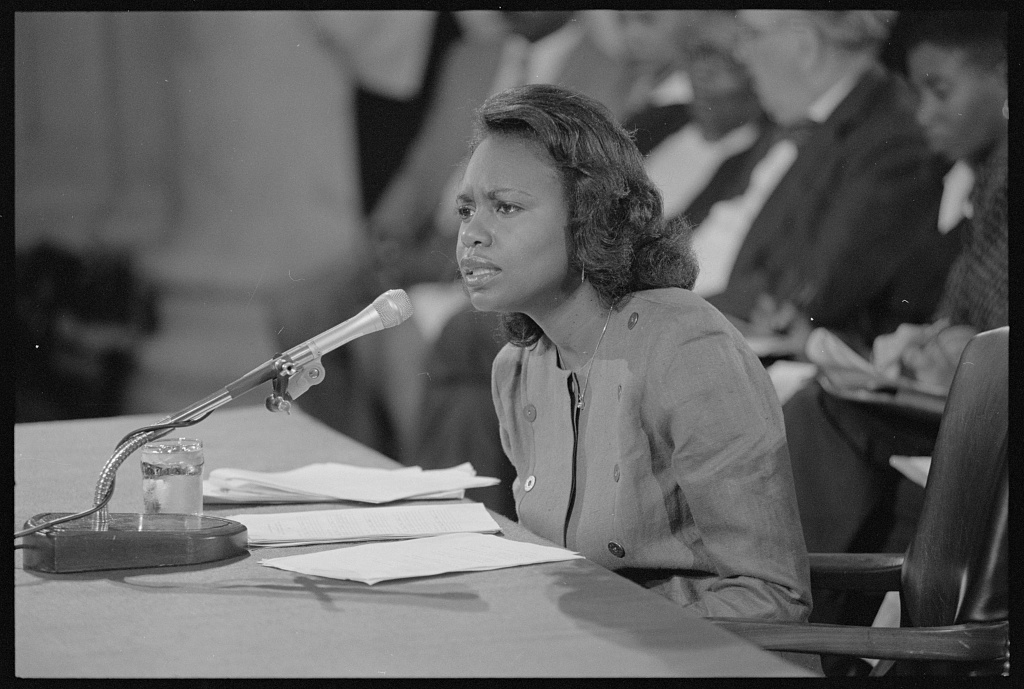 Earlier this week Joe Biden got a strange endorsement, a blast from the past. It came from Anita Hill, the law professor whose sensational allegations against Clarence Thomas during his confirmation hearings in 1991 riveted the nation and humiliated Thomas, forever tarnishing his character and reputation. Those hearings before the Senate Judiciary Committee were chaired by Sen. Joe Biden.

Hill’s endorsement for old Joe in 2020 was one that Biden and the Left coveted. She offered it despite her “objections” and his “mistakes.”

“Notwithstanding all of his limitations in the past, and the mistakes that he made in the past, notwithstanding those — at this point, between Donald Trump and Joe Biden, I think Joe Biden is the person who should be elected in November,” Hill told CNN. “I want the next president to be somebody that I can go to and talk about the real issues that women, men, and non-binary people are experiencing.”

That Biden had engaged in “unfair” treatment against Anita Hill has been the narrative among the Left for a while — or at least during the Democratic primary season. Funny, we conservatives would argue that Clarence Thomas seemed a victim of unfair treatment — what Thomas memorably called a “high-tech lynching.” But that’s not how a liberal thinks. Witness a New York Times article from April 2019, “Joe Biden Expresses Regret to Anita Hill, but She Says ‘I’m Sorry’ Is Not Enough.”

“Joe Biden knew Anita Hill was going to be an issue for him,” noted the Times. “So a few weeks ago, as he prepared for his presidential announcement, he reached out to her through an intermediary and arranged a telephone call, hoping to assuage her. It did not go how he had hoped.”

On the literal first day of his presidential campaign, team Biden disclosed the phone call, saying the former chairman of the Judiciary Committee expressed to Hill “his regret for what she endured.” But alas, Hill told the Times, “the call from Mr. Biden left her feeling deeply unsatisfied.”

The whole tone of the weird Times piece is that it was Hill who was the victim during the 1991 Senate Judiciary Committee hearings, not Thomas. She suffered. But how so? What did Joe do to her?

Well, something really bad, apparently. Digging through the odd Times piece, about the best we can muster is that Biden’s sins against Hill included these:

She [Hill] said she views Mr. Biden as having “set the stage” for last year’s confirmation of Justice Brett M. Kavanaugh, who, like Justice Thomas, was elevated to the court despite accusations against him that he had acted inappropriately toward women….

In recent interviews, Ms. Hill and others involved in the confirmation fight portrayed Mr. Biden’s handling of the hearing as at best inept and at worst deeply insensitive. They fault his refusal to seriously investigate her accusations and take public testimony from other potential witnesses who said the future justice had acted inappropriately with them….

The 1991 hearings were a surreal spectacle, as senators prodded an obviously uncomfortable Ms. Hill through awkward testimony about penis size, pubic hair and a pornographic film star known as Long Dong Silver — shocking public discourse at the time….

She said she also faults Mr. Biden for letting the hearings get out of control.

Gee, any concerns here for how the hearings got out of control for Clarence Thomas? Do you think maybe Thomas was made to feel uncomfortable? Do you think maybe Thomas and his wife felt hurt by ineptitude and insensitivity? How awkward was it for Clarence Thomas to be publicly accused of these crude statements? For liberals, fairness is a one-way street, and the conservative is presumed guilty as charged.

Even old Joe seemed puzzled by the thrust of the Times’s guilt-laden “news report.” The day after the Times piece appeared, Biden appeared on ABC’s outlandish The View, where he dared to aver, “I don’t think I treated her badly.”

Note the Left’s assumptions: Anita Hill must be believed, not Clarence Thomas. He is Clarence the cretin. She told the truth, and he lied. Period. End of statement. Historical narrative etched in stone.

And yet, if only the Times and Anita Hill knew what Joe Biden might have really felt. Heck, their heads would start spinning. To that end, I recently had reason to revisit this venerable magazine’s explosive 1992 cover story, “The Real Anita Hill,” written by one David Brock, who, of course, has done one of the most remarkable political-ideological about-faces in the history of conservatism. He went on to launch the nasty Media Matters, where, to quote one observer, he consummated his shift from “right-wing assassin turned left-wing assassin.” Brock has since distanced himself from things he once wrote in these pages (particularly about Hillary Clinton). That’s a shame. Brock did some darned good reporting for The American Spectator beginning way back in 1987. I’ve read all of his articles. His best-known work included that 1992 piece, “The Real Anita Hill,” which eventually led to an entire book on the subject by the same name.

This isn’t the place to revisit Brock’s lengthy investigative piece from March 1992, but looking back, one person really stood out: Yes, Joe Biden.

The Brock piece mentioned Biden 12 times. Most remarkable was how the piece closed. The final paragraph in the long piece ended with this:

Even senators who had opposed Thomas before Hill emerged, and would vote against him October 15, came away from the hearings with the same gut instinct as the American public. In the wee hours of Monday morning, when it was all over, Joe Biden stopped two of Thomas’s witnesses in the hallway outside the hearing room. Biden told the women: “I believe him, not her.”

Whoa, Biden believed the guy, not the gal? He believed Clarence the cretin rather than Anita?

Was that indeed Joe Biden’s feeling? Was that where he stood? Did David Brock have that right? Does Brock stand by that report today?

In his 1993 book, The Real Anita Hill, Brock went further, with added, interesting tidbits on the person of Joe Biden. Brock reported that Biden had told a GOP senator that he would probably vote for Thomas. But then Biden saw it as politically unwise after Sen. Howell Heflin came out in support of Anita Hill. (Incidentally, and quite important as a reflection of Biden’s ability to be pulled to the left, Brock writes that Biden initially had said he would vote for Judge Robert Bork as well, but flip-flopped. Brock said that Biden “operated on a short leash” and “was forced to move to the left” by Sen. Ted Kennedy and other liberals on the committee.)

Importantly, Brock would later disavow that book and what he had said about the person of Anita Hill. He apologized for “trashing” her. Fair enough. But what about his information on Joe Biden? Was that accurate? Can Brock tell us today?

To repeat, did Joe Biden then, and does he still (if Brock’s account is accurate), believe Clarence Thomas rather than Anita Hill? Did he consider her the liar during the spectacle?