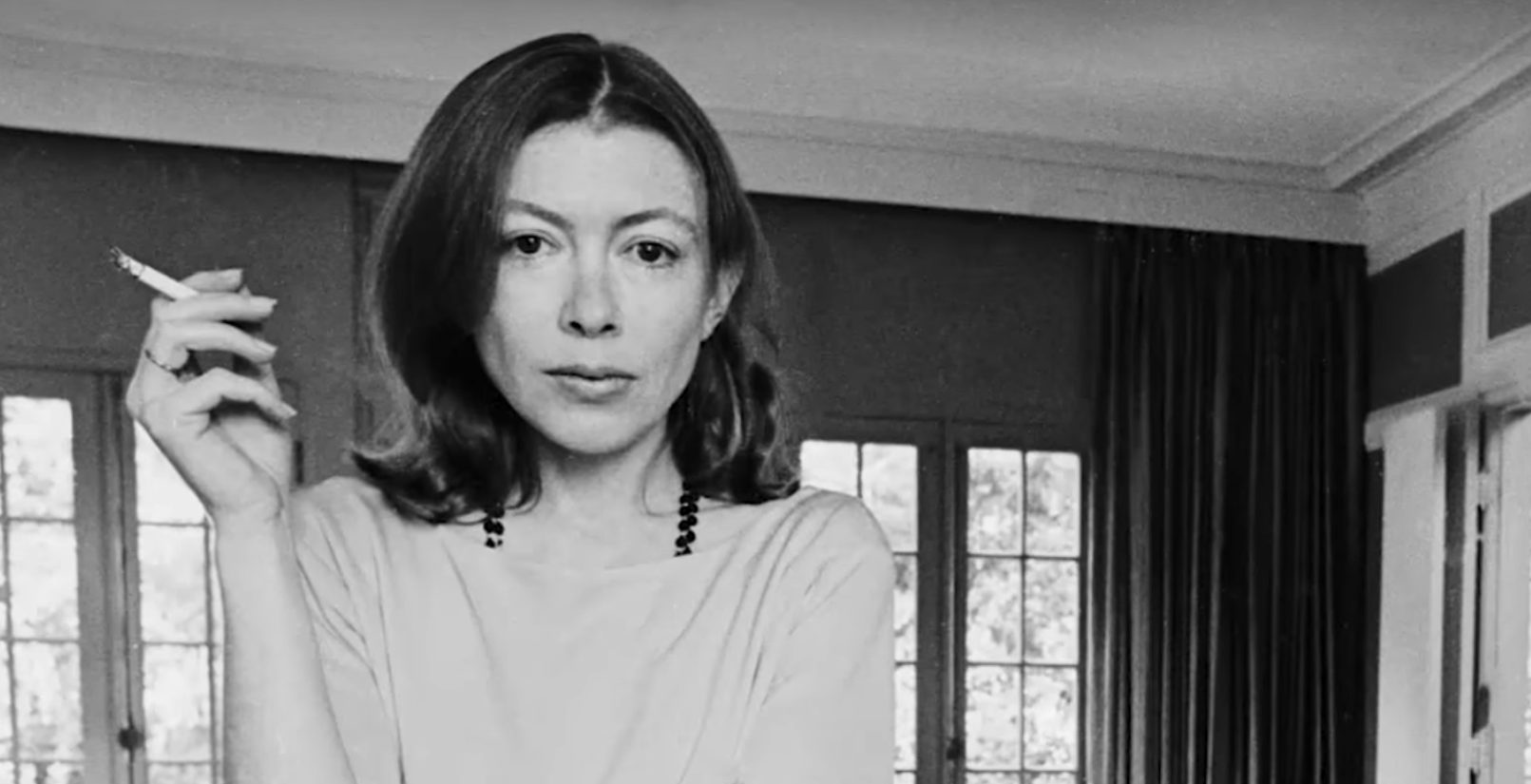 I suspect Joan Didion would be amused to learn that I keep her on my obituary watch.

The 86-year-old essayist is the first person whom, a few years ago, I put on my list of heroes I expect to die soon. It has grown quite lengthy since. Didion is a spring chicken compared to some members: Hal Holbrook, Tom Lehrer, and, until his demise last year, Max von Sydow, were born nearly a decade earlier.

I never would have started the list if it were not for Didion’s own writing on death. She made the subject profitable. That’s in part thanks to her innate talents, but it’s mostly because some exceptional material fell into her lap. Her husband, John Gregory Dunne, dropped dead mid-sentence in 2003, an event that gave rise to her Pulitzer Prize–winning memoir The Year of Magical Thinking. And her adopted daughter, Quintana Roo, succumbed to a rare illness two years later, which resulted in a much-acclaimed sequel, Blue Nights.

Didion, as early her seminal essay “Slouching Toward Bethlehem,” loved to mine other people’s mishaps for a payout — she once described a hippie toddler’s LSD trip as “gold … you live for moments like that” — so it made sense when she ordered her own agony into a book deal. The move was a late-career coup: she got to cast herself both as interviewer and subject, simultaneously present to and detached from a remarkable grief. And once Didion is also dead, that ability for self-disembodiment will likely be her lasting legacy.

It’s a legacy she already seems to be crafting. Didion has not written anything new since Blue Nights. Instead, she allowed herself to be the subject of a groveling Netflix documentary in which her nephew Griffin Dunne analyzed her mystique. She also let her publisher pump out two low-effort cash cows: South and West: From a Notebook, scattered diary entries recorded during a 1970s road trip, and Let Me Tell You What I Mean, a slim volume of miscellaneous essays, released this week.

Neither book collects much worth collecting. This is especially true of Let Me Tell You What I Mean, which contains exactly one memorable sentence: “When my father was told that I had been rejected by Stanford, he shrugged and offered me a drink.” The rest is journalese, the ornamented garbage that Didion — like all successful writers — once had to churn out to keep her dishwasher running. There is no doubt that she knows this. And there is no doubt that she does not care.

Didion made that much clear last week, when an earnest young reporter from TIME came knocking on her door.

“What does it mean to you to be called the voice of your generation?” the reporter asked.

“I don’t have the slightest idea,” Didion snapped back.

Didion became even more prickly when the reporter tried to coax her into offering some thoughts on the coronavirus pandemic. Referencing The Year of Magical Thinking and Blue Nights, she asked Didion if she had any words of comfort for those whose loved ones have died from COVID-19.

“Do you fear death?” the reporter asked.

“Hope for what?” Didion replied. “Not particularly, no.”

Didion remained icily dispassionate throughout the rest of the interview, almost as if she were observing this social ritual from somewhere outside herself. It made me wonder just how long she’s lived that way. Was it after her husband passed? Her daughter? Or was it sometime in 2011, after Blue Nights was published, when she no longer was required to concoct feelings that she could rearrange into publishable paragraphs? Perhaps it’s always been like that.

Whatever the case, Didion has carried on for almost a decade now in silence. Yes, a Joan Didion is appearing in new books, but it is a disembodied Didion, a faint echo of the one currently holed up on the Upper East Side. And the real Joan Didion, alone and so frail she can hardly dress herself, has chosen to step aside for the other one.

“We tell ourselves stories in order to live,” Didion wrote of herself in The White Album. Now that she’s stopped, she must be looking forward to the next thing.