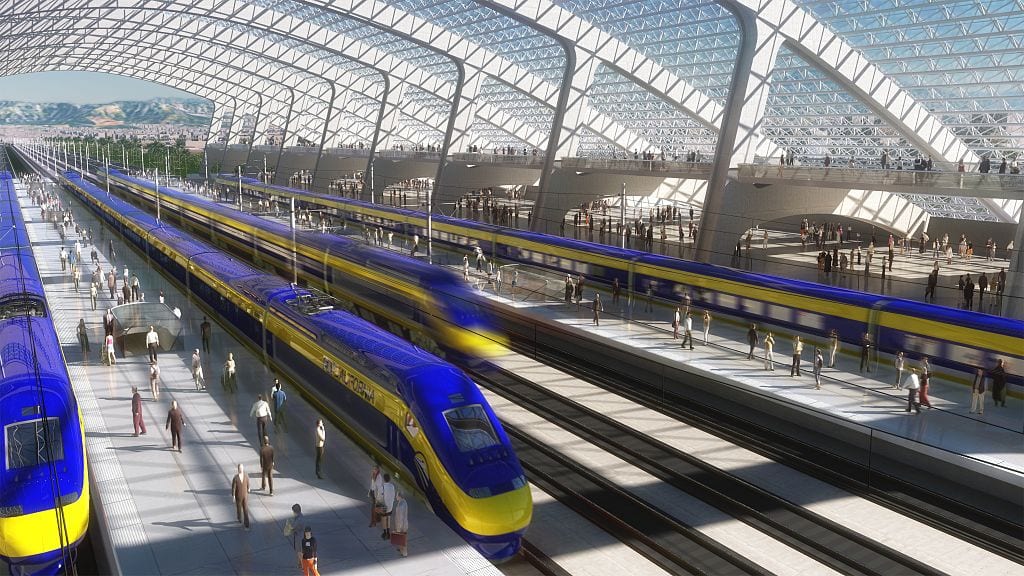 “That’s bulls**t,” Gov. Jerry Brown told a group of union leaders in Sacramento this week as he addressed the latest bad news about his pet project to build a bullet train connecting San Francisco with Los Angeles. The union folks probably loved the tirade, given that the proposed rail system is more of a make-work project for union members than a transportation system. But the governor’s promise that the state can build the railway if “we don’t let these small-minded people intimidate us into lowering our expectations” rang a bit hollow.

Brown said he is “so tired of all the nonsense that I read in the paper and you hear from other politicians.” But the latest nonsense comes from his own High-Speed Rail Authority, which released its latest business plan. The project already is over budget and behind schedule. The new plan bumps the predicted costs from $63 billion to $77 billion — and delays the opening date by four years, to 2033.

Those costs will surely grow even more given that the current overruns are taking place on the flat, easy-to-build section of the system through the Central Valley. Just wait until the real engineering challenge is confronted, as rail planners figure out how to take the train through the Tehachapi Mountains separating the valley from Southern California.

Look at other major California infrastructure projects for an idea of realistic cost overruns. Rebuilding the eastern span of the Bay Bridge, following the Loma Prieta earthquake in 1989, was 2,500 percent (that’s not a typo) over the original estimate and wasn’t completed until 2013.

Apparently, it’s “small minded” for Californians — including one of the authors of the 2008 statewide initiative that secured $9.95 billion in funding for the train project — to question the overruns, delays, and failure of the latest plan to live up to the promises made to voters. That author, former Sen. Quentin Kopp, remains an advocate of high-speed rail in concept, but he calls the current alignment “foolish” and said “it is almost a crime to sell bonds and encumber the taxpayers of California at a time when this is no longer high-speed rail.”

Kopp is right. To make it feasible, rail boosters created a route alignment that shares tracks with commuter trains (the blended route) on the peninsula south of San Francisco and in the Los Angeles area. It’s highly unlikely that it will connect the state’s two megalopolises anywhere near the promised time of 2 hours and 40 minutes given how slow the trains will go in these areas.

It’s magical thinking to expect the project to do that as 2008’s Proposition 1A promised – with no operating subsidies and at an affordable price funded by private investment. Investors have run for the hills and the subsidies are a given. And why is this project even needed? I just took a Southwest Airlines flight from Sacramento to Los Angeles for under $100 roundtrip (on a special deal, which you can regularly find) with a flying time of a little more than an hour. It’s not as if Californians have no options to travel up and down the state.

The project has been unable to tap federal funds now that the Obama administration, which supported the project, is history. The initial bond funding is a pittance of the project’s estimated total cost. The auctions of cap-and-trade credits are another funding source, but even the Democratic-controlled Legislature is reluctant to open up those spigots given its other priorities.

But Brown has a plan: “I’ll tell you how we’re going to fund the railroad. We’re going to take back the Congress and then a Democratic Congress is going to put the high-speed rail in the infrastructure bill and then we’ll get that trillion dollars and we’ll put America back to work.” That’s far from a certainty — and it’s a bizarre way to plan for a major investment. Let’s just start building and hope that the political winds change and a new Congress will dole out the money. OK, I guess.

That approach is reminiscent of the one detailed by flamboyant former Assembly Speaker Willie Brown. In a July 2013 San Francisco Chronicle column addressing $300 million in cost overruns for the city’s Transbay Terminal, he argued, “If people knew the real cost from the start, nothing would ever be approved. The idea is to get going. Start digging a hole and make it so big, there’s no alternative to coming up with the money to fill it in.”

The bullet-train project epitomizes such public-sector cynicism. Proposition 1A offered myriad detailed promises to woo skeptical voters. A superior court initially halted the sale of the bond funds to begin digging the hole, so to speak, because the authority wasn’t following requirements that it identify enough cash to complete the first 300-mile segment. Unfortunately, a higher court ultimately gave the project the go-ahead. That shouldn’t be a shock to Spectator readers, who are used to hearing the absurd promises made by politicians. But voter initiatives are written laws, not suggestions.

In recent months, the governor’s other large infrastructure boondoggle has also run into trouble. Brown wants to build two giant 35-mile tunnels underneath the Sacramento-San Joaquin Delta to bring water from the relatively rainy north to arid Southern California. It’s a way to keep water flowing even when the state shuts the pumps to protect the endangered Delta smelt.

“The $17-billion bill for the twin-tunnel version was supposed to be paid by the San Joaquin Valley agricultural districts and Southland urban agencies,” reported the Los Angeles Times. “But the farm districts have for the most part declined to open their wallets, saying the water is too expensive for them.” Not all of the urban agencies are all that excited about paying for it, either.

These projects are unfathomable given that Brown last year insisted that Californians raise gas taxes — or else their roads and bridges will continue to crumble. As Brown leaves the public stage after decades of elected office, he is reduced to hurling insults at Californians who make perfectly reasonable criticisms of costly projects that divert money from far more pressing priorities. In my view, that’s very definition of small-minded BS.