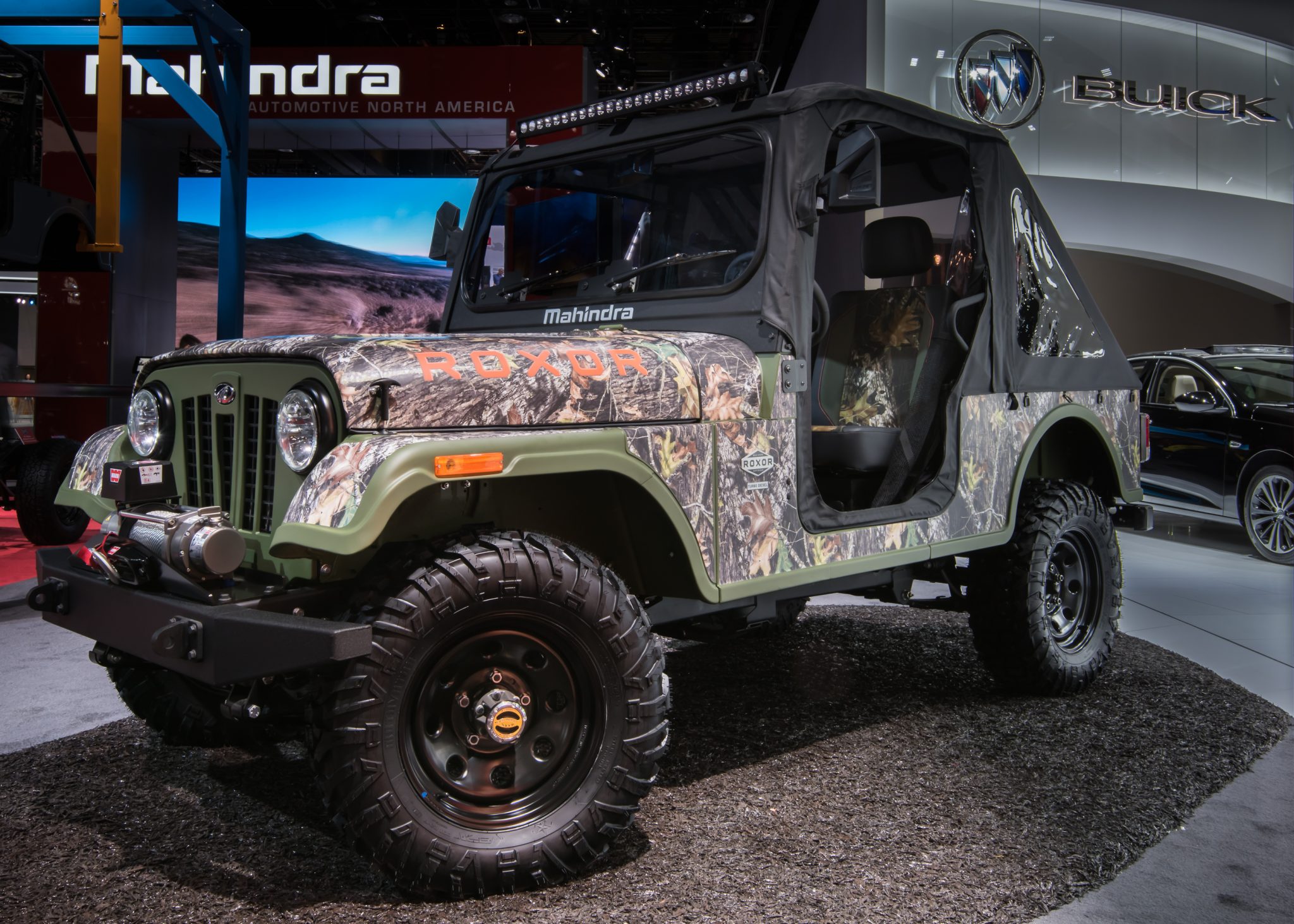 Affordable Jeeps are coming back!

Just not from Jeep.

Mahindra, the manufacturer of the Roxor — which looks, and is, a lot like the Jeeps you used to be able to buy for about half the cost of the Jeeps you’re forced to buy today — is apparently going to resume manufacturing them this coming year.

Earlier this year, Mahindra was forced by the U.S. International Trade Commission to stop selling Roxors in the U.S. on account of trade dress infringement. Fiat Chrysler — which owns the Jeep brand — argued that Roxors were essentially knockoffs of the classic CJs Jeep hasn’t sold since the 1980s.

A Roxor stickers for about $16,000 — precisely because it is a knockoff of the old CJs Jeep hasn’t made since the 1980s.

Mahindra’s North American CEO, Rick Haas, admitted as much, openly: “Everyone understands that our vehicle is a CJ.”

By which he was saying that the Roxor is what a Jeep used to be.

That isn’t so much a trade dress problem as it is another kind of problem.

The Roxor is affordable because it is simple — which modern Jeeps like the Wrangler aren’t.

It has no air bags. It’s not designed to pass current federal bumper impact, rollover, or other such “standards.” It lacks a direct-injected, computer-controlled engine with variable valve/cam timing, cylinder deactivation, and Automatic Stop/Start (ASS).

It does have a mechanically injected 2.5-liter diesel engine that doesn’t even need a battery to start it — if you roll the thing down a hill and let out the clutch — that’s capable of averaging 50 miles per gallon. That’s about twice the average you’ll get out of a new Wrangler.

It also has manual locking hubs, low-range gearing, and everything you need to go off-roading.

Without all the rest of it.

That’s why it’s affordable — like Jeep CJs used to be.

The current Wrangler isn’t affordable — because it has all the rest. In part that’s because Jeep obediently builds it to be “compliant” with all the things federal bureaucrats say a new vehicle must comply with, including some things that only a busybody could claim are anyone’s business except the buyer’s — such as how much damage the vehicle can withstand in the event of a crash. But this has nothing to do with whether a vehicle is likely to crash.

Such edicts are the vehicular equivalent of government busybodies issuing fatwas decreeing how many calories you’re allowed per day.

We can still choose to eat bacon cheeseburgers rather than soy patties — though probably not for long.

But federal fatwas are only part of the reason for the Wrangler being almost as expensive to buy — and insure — as an entry-level BMW.

The Wrangler is more expensive than it has to be — due to compliance costs — because Jeep won’t sell you one without AC or power windows or a touchscreen and other such things it isn’t forced by fatwa to install but has made standard.

Why have they made them standard? Because it makes Jeep more money, since you can’t avoid paying for former “extras” like AC, power windows, and so on.

All the car companies do this now, because of financing schemes that make it possible for buyers to spend more than most of them can afford. An almost $30k-to-start Wrangler represents an expenditure equivalent to about half the average American’s annual family income — and for that reason is unaffordable on the face of it — but it’s made to appear “affordable” through six- and seven-year loans.

This has made it impossible for people who’d like to live within their means, or even below them, to find even a relatively simple new vehicle — one that is “compliant” with the various federal fatwas — but doesn’t cost almost $30k to start because of all the standard features.

Plus tax — as Elvis used to say.

It’s a form of regulatory capture — making it too expensive for a newcomer to compete by making regulatory compliance costs too high — without the regulations. But with the low-low financing. Which people sign up for because what choice do they have?

And that’s why the $16k Roxor is such a threat to the established order of things.

The trademark infringement case wasn’t really brought because Mahindra was trading off the Jeep name but because the Jeep name no longer means what it used to — and because Roxor was reminding people of that.

The Roxor does not compete directly with the Wrangler. It offers an alternative to it. A simpler, much more affordable alternative that doesn’t require signing up for a six-or-seven-year debt indenture and also thumbs in the eye this business of government busybodies forcing people to finance what they could otherwise not afford.

If Jeep still built Jeeps — affordable and simple vehicles without all the cost-padding standards — the Roxor would be irrelevant. People would buy the real thing, not the copy of it. But it’s Roxor that makes the real thing now — and that’s the real problem.

For Jeep, and for all the major players.