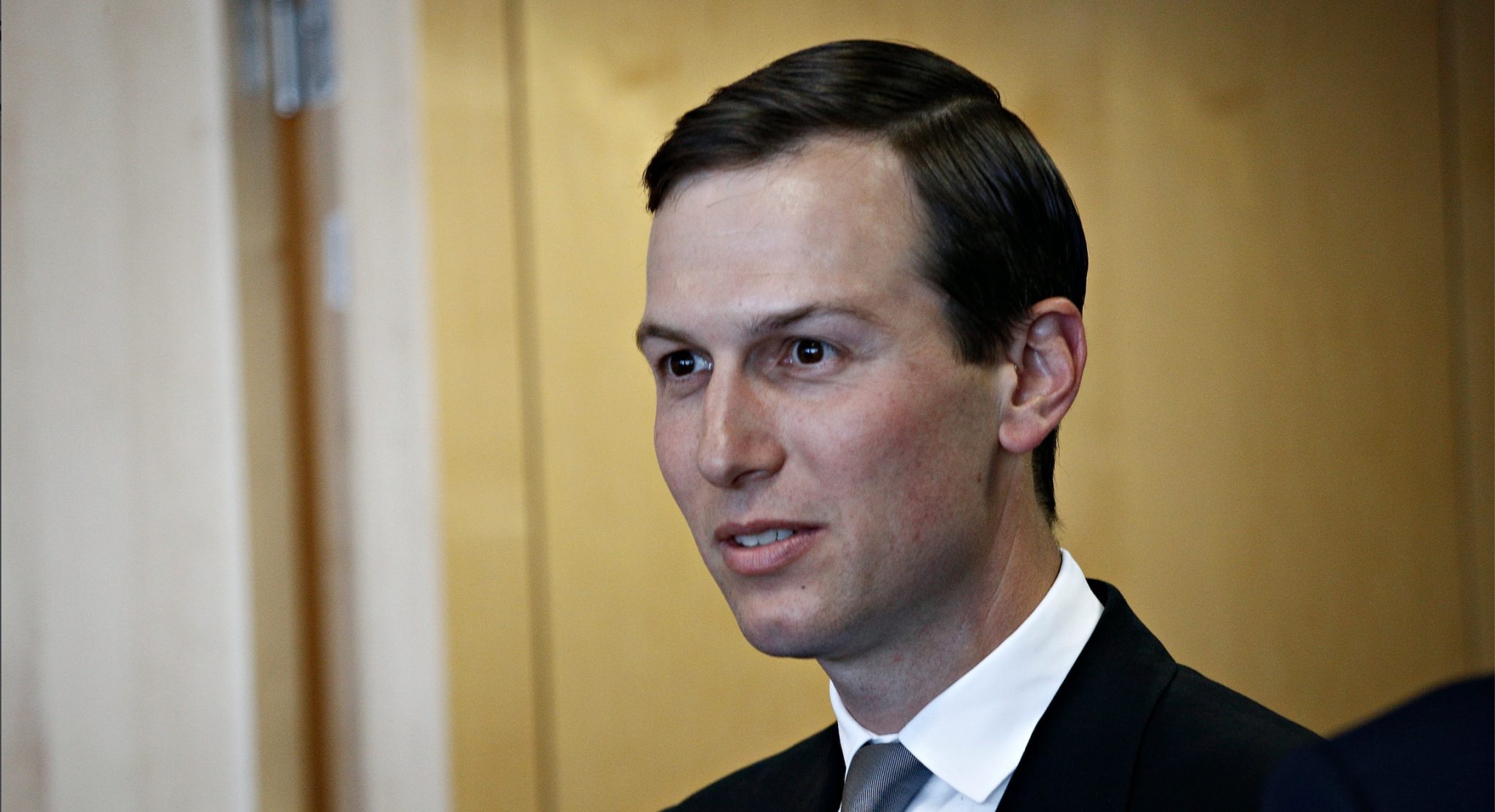 The online Axios news site has posted Jared Kushner’s PowerPoint slides on the Middle East peace plan recently presented to senators at the White House. The 10 slides summarize the plan in words and images chosen by its main author. Though no doubt well-intentioned, they make for depressing reading.

Not that the Trump/Kushner plan is all bad. To the contrary, it has major pluses. It is the first plan that fixes meaningful responsibility on the Palestinians for causing and perpetuating the Arab–Israeli conflict. It offers the Palestinians less than did many previous deals they contemptuously rejected outright. It represents a serious, in-depth source of information on the complex geography that underlies the conflict.

Also, to its great credit, the T/K plan notes that the United Nations has passed more than 100 Security Council resolutions and nearly 700 General Assembly resolutions, nearly all anti-Israel. (One infamous one, GA Res. 3379, the “Zionism is racism” resolution passed in 1975, was repealed by GA Res. 46/86 in 1991. Israel insisted on its repeal as a condition of attending the post–Gulf War Madrid Arab–Israeli peace conference being pushed by Bush 41.) The UN continues to target America and Israel. The latest initiatives: America for its alleged war crimes in Afghanistan, Israel for alleged war crimes in Gaza.

Now the bad news. The plan’s subtitle — “a plan to improve the lives of the Palestinian people” — sets a goal that is not a proper mission of the United States. If we are not the world’s policeman, nor are we the world’s nanny. Slide Two is curiously titled with Albert Einstein’s famed formulation for insanity. Yet the first bullet point underneath proposes to do the same thing all over again. Having arranged for $50 billion in aid to the Palestinians since the 1993 Oslo Accords, we propose to arrange a second $50 billion. The second bullet is flatly false, claiming that both parties were “incentivized” to compromise under Oslo; as usual, Israel always did so, but the Palestinians refused.

I posted an American Spectator piece on the Trump/Kushner Mideast economic plan shortly after it was announced in June 2019. My assessment compared the aid given Palestinians since Oslo to that given Western Europe in the postwar Marshall Plan. It turns out those numbers understated the lavish generosity bestowed upon the Palestinians. The revised post-Oslo numbers below correct my earlier estimates.

Priced at $15 billion in 1948 dollars — $160 billion today — the Marshall Plan amounted to $337 per person, adjusted to 2019 dollars. Since Oslo, the Palestinian territories (excludes UN-administered refugee camps) have received $50 billion. Assuming four million Palestinians living on the West Bank and in Gaza, Western largesse since Oslo adds up to $12,500 per recipient, some 37 times the per person aid given Western Europe under the Marshall Plan, spread over a period more than six times that for the four-year Marshall Plan.

What did Israel get for all this Western aid? Land for lies, brainwashing children, destroying signs of ancient Jewish presence (from 1994 on); land for suicide bombers (from 2000 on); land for rockets (from 2005 on); two ceasefires for terror tunnels (2008 and 2014); knife terror (since 2015). So, Kushner wants to try again?

And let us give special mention for the latest Palestinian launch of “party balloons” — with bombs inside, floated towards Israeli kindergarten playgrounds. Their objective channels the toy-shaped mini-bombs dropped by the Soviets in Afghanistan; these were intended to maim Afghan children, saddling Afghan society with huge health-care costs.

Add in the practice of using Palestinian child soldiers to carry out suicide attacks, along with their indoctrination at UN refugee camps. And in February alone, while Israel treated over 100,000 Palestinians in Israeli hospitals and distributed 250 coronavirus test kits provided with training in their use, Palestinians repaid this solicitude with blood libels against Israel and the Jews.

Slide Six describes the conflict as both over territory and security, as if they were of equal import. But the territorial component is about security, that Israel not be made to retreat to what Israel’s most celebrated foreign minister, Abba Eban, called “Auschwitz borders.” The Kushner plan would still leave Israel with a nine-mile waist at its narrowest point.

Finally, the Kushner plan allows the Palestinians four years to decide whether to sign up — a duration normally used for implementation of a plan. One year to decide would have been generous. But Axios reports that if the Palestinians do not respond positively within a few months, Team Trump will move on. As one White House official put it:

Nobody can say we didn’t give the Palestinians a chance to go back to the table. If they want to talk we are ready. We think we can make it better for them, but if not the world is going to move on without them. We are not going to do things in the same stupid manner it was done before. We are going to keep moving forward.

Consider how long it took Anwar Sadat to decide to go to Jerusalem in the fall of 1977 — a decision made under pressure because on Oct. 1, 1977,  then-President Carter had proposed — along with the Soviet Union, no less — a peace conference in Geneva with all parties — radicals and terrorist groups — included. It took Sadat, who had kicked the Soviets out of Egypt in July 1972 and turned to the West instead, a matter of weeks to decide to visit Jerusalem, which he did on Nov. 20–21, 1977. Allowing the Palestinians four years gives them that much more time to try to get the proposal watered down and prepare to violate an agreement if ultimately reached.

The utopian sand castle conjured in the final Kushner slides remind me of an old economist joke. It starts with the proverbial shipwrecked survivors making their way to an isolated island after their ship sank. They set out to explore the place and suddenly fall into a 20-foot-deep pit. For an hour, the castaways struggle with various exit schemes: one group seeks to use a long branch to lasso a tree stump, another group tries to dig footholds in the walls, and a third group seeks to form a human pyramid, only to topple over each time. The economist bemusedly watches this spectacle while leaning against a wall of the pit, catching sun rays. Finally, one of the exhausted castaways looks over at the economist and asks him to pitch in. The economist replies in the negative, saying, “You’ll never get out that way.” Asked if he has a solution, the economist answers that indeed he does: “First, let’s assume we have a ladder.”

The Israelis, despite these shortcomings, had to accept the T/K plan. Donald J. Trump has been by far the most pro-Israel president ever: moving the U.S. Embassy to Jerusalem, annexing two-thirds of the Golan Heights, and supporting ever closer collaboration with Israel on myriad defense and civilian projects. Bibi surely knew this; he went along because he knew that once again the Palestinians would screw up.

Fortunately for Israel and its Western allies, the Palestinians can be counted on to continue pursuing failed strategies, just like the marooned castaways trapped in the pit. A century of rejectionist obstinacy, rooted in the 20th-century monster that is Palestinian nationalism, was a malignant marriage of the Kremlin’s “wars of national liberation” and the Arab world’s desire to destroy Israel.

But this tees up a final question: What is the alternative to seeking a negotiated settlement to the Arab–Israeli conflict?

In a word, victory and an imposed peace. This is the strategy that won World War II for the Allies. A negotiated peace only can come if an adversary has abandoned the field. The Palestinians show no sign of doing the latter. This leaves the former.

But we are at present unable — ditto Israel — to take the kind of steps that won World War II. Then we waged all-out war, with the goal of unconditional surrender. Since then, we have only won once — the Gulf War — and then we snatched defeat from the jaws of victory by failing to help the massive postwar uprising topple Saddam Hussein.

Against Israel and America, the Palestinians use the same three weapons that al-Qaeda and the terror groups use: our technology, our media, and our laws/values. Our technology was turned against us on Sept. 11, 2001; our media decisively turned on us after Abu Ghraib in 2004; and our laws/values have been weaponized since Guantanamo in 2002. It is for these reasons that despite the atavistic barbarism of the Palestinians, neither Israel nor America has reduced them and their miserable cities to rubble. We could, of course, do so in an afternoon, with conventional weapons.

Consider: Were Curtis LeMay with us today, would the man who oversaw the incineration of one-quarter of Tokyo in March 9, 1945, and carried out the atomic bombings five months after that — where fire destroyed far more than the nuclear blast wave — have let the Palestinians target Israeli children at will?

To pose the question is to answer it. One paragraph from John F. Kennedy’s celebrated inaugural address sums up our task, if we focus on one of the four objectives JFK set, that of defeating tyranny:

If the totalitarian Soviet Union, with its formidable military machine, heading a global conspiracy in search of world geopolitical and ideological domination, could be defeated, is it really beyond us to defeat a pair of miserable, impoverished statelets, with military power a micro-fraction of ours and Israel’s, zero economic power, and a profoundly self-destructive culture of death over life?

When the Palestinians persist in rejecting this proposal, the Arabs will move closer to Israel. Arab nations have a growing stake in Israel’s prosperity and its status as a world leader in technology, economics, energy, etc. Who needs a 22nd Arab state? The Arabs don’t; neither does Israel, and nor do we. If the Palestinians threaten Israel’s security, the Arabs will eventually intercede to prevent irreparable harm to Israel, a nation they need.

Then we can march on to victory. Call it “bypass and bye-bye”: the Palestinians are relocated from the West Bank and Gaza into one or more Arab territories — most likely Jordan, upon inevitable regime change after King Abdullah, when Jordan becomes a self-declared Palestinian state. We can offer the easy way — bribe them to move by offering massive aid (undeserved, but worth the price if they go). Failing that, there is the hard way: some form of forced migration.

If we can’t win this one, we are in greater trouble than we realize.