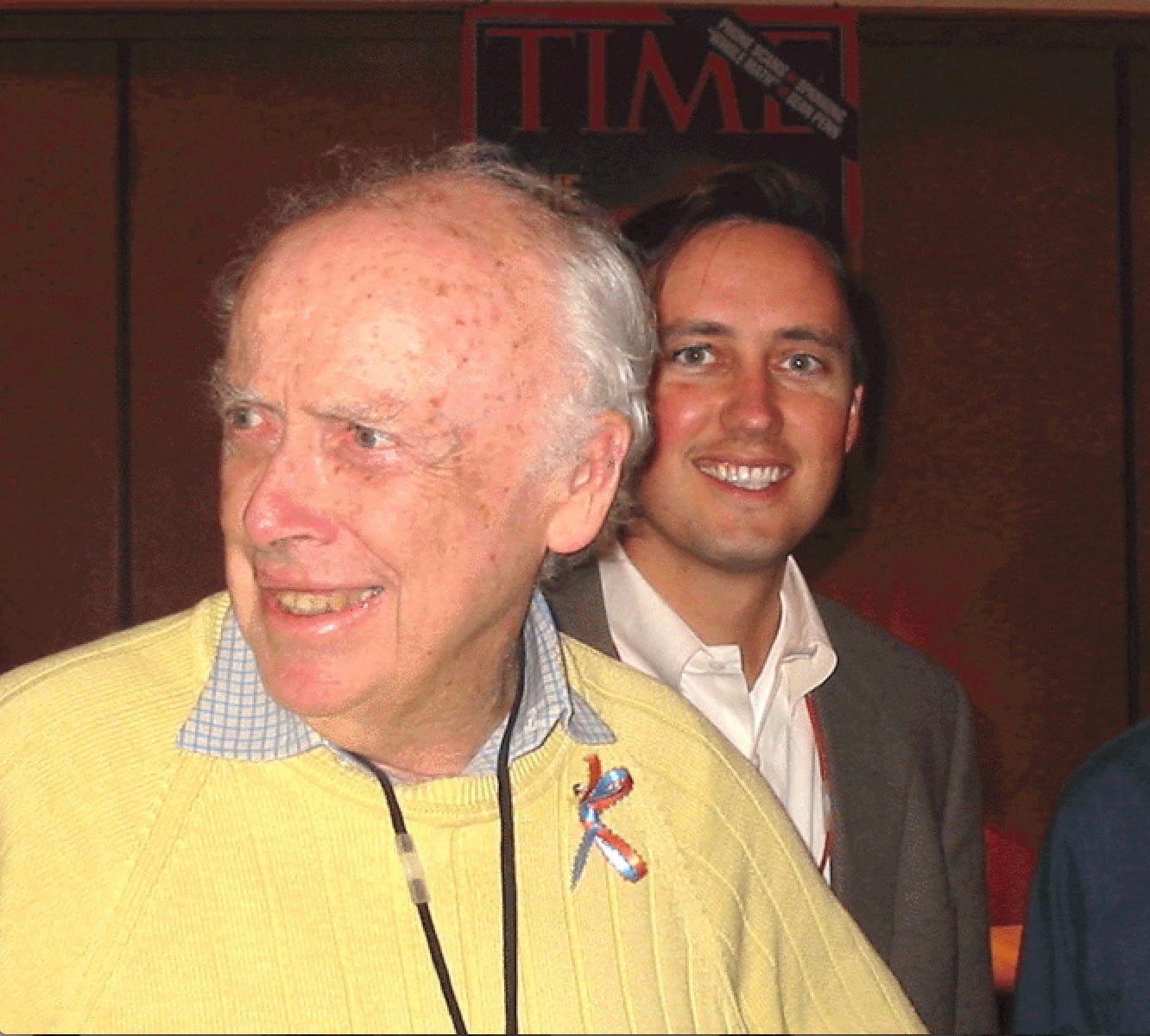 Sixty-six years ago, James Watson and Francis Crick burst into The Eagle pub in Cambridge, England, with the latter proclaiming that the pair had “discovered the secret of life.” About a decade later, the Nobel committee recognized them with its prize for identifying the double helix as the structure of deoxyribonucleic acid, which, through the mercy of acronyms, we call DNA.

More than a half century later, in times so benighted that their inhabitants imagine them as enlightened, the 2019 People know Watson not as the co-discoverer of “the secret of life” but as a villain who confessed to a woman whom he had earlier allowed to board in his home as a student that he suspected genetic differences account for racial disparities on IQ-test results. And neither Watson’s central role in the popularity of Maury nor his bringing into existence Forensic Files redeems his reputation among the 2019 People.

Earlier this month, PBS aired “Decoding Watson” to launch the 33rd season of its American Masters series. It focused, strangely, not on science but politics. It emphasized how Watson and Crick came to their discovery through an unauthorized look at an x-ray photograph taken by a woman, left out of the Nobel honor, and on race by baiting its 90-year-old subject into revisiting those remarks about blacks and intelligence made on a car ride a decade earlier. Rather than emphasize the diseases cured, the criminals caught, or the grateful baby daddies hearing you are not the father on daytime TV as a result of this discovery, the filmmakers narcissistically chose to shout their own virtue by assailing the character of a nonagenarian.

“I regret it,” Watson disclosed of his earlier remarks, “but I can’t erase it by announcing I never meant what I said.”

A strange delayed-reaction media frenzy ensued over remarks initially made over a decade ago. Vox.com accused the scientist of leaving “a long history of provocation with racist, sexist, homophobic, anti-Semitic, and even fat-shaming remarks.” To illustrate the man’s depravity, Vox highlights in its subheadline Watson’s admission: “People say it would be terrible if we made all girls pretty. I think it would be great.”

As a result of PBS airing nothing about Watson that we did not already know, Cold Spring Harbor Laboratory (CSHL), the institution that Watson helped rescue as its director and about which documentary talking head Nathaniel Comfort explains, “Cold Spring Harbor is Jim Watson,” severed all ties with the Nobel winner. It labeled Watson’s remarks “unsubstantiated,” “reckless,” “reprehensible,” and “offensive.”

The reasons for the rebuke pertain less to anything James Watson ever said and more with what CSHL once did.

Charles Davenport pushed quackery as science in leading the institution for 25 years in first half of the last century. Davenport claimed that, if, as he suspected, those of African ancestry lacked the intelligence of Caucasians, “it would be best to export the black race at once.” His dubious scientific work influenced contemporaneous laws pertaining to immigration, miscegenation, and eugenics, which, lest anyone forget, governed the codes of a majority of states prior to World War II. That war helped to put an end to idiocy masquerading as science. But for the preponderance of the first half of the 20th century, CSHL served as the intellectual fount of ugly ideas that seeped their way into American law. Its scientists traded ideas with Nazis, who took them many steps further on another continent.

One understands the sensitivities of CSHL pertaining to its past, particularly as its present involves real science beneficial to mankind. This requires donations from foundations skittish about controversy and the participation of scientists who want to conduct their work free from stigma. Still, Watson’s treatment seems more about covering up what the institution did rather than what an old man said.

What the old man said, fair-minded viewers of the documentary surmise, stems not from hatred but from the propensity of intelligent people, particularly arrogant, intelligent people, to get it wrong from time to time. I wrote a whole book on this phenomenon, Intellectual Morons: How Ideology Makes Smart People Fall for Stupid Ideas. The ideology at work here stems from what makes Watson, well, Watson — the penchant of scientists to quantify the unquantifiable, his high intelligence, and his fixation on genetics.

Though IQ tests surely possess value and measure something, one antiscientific folly of scientists involves a mania to quantify things not easily quantifiable. Scientists rely so much on certainty that some impose certainty on uncertain things. IQ tests seem an example of this tic in action. What is intelligence? Does it lend itself to accurate measurement as height and weight do? Or is it something more abstract, more difficult to measure? The success of individuals in a certain area who demonstrate incompetency in another suggests that one who excels at, say, mechanics, but struggles with a math book possesses intelligence overlooked by a test devised by men who may excel at math but not mechanics. Perhaps intelligence works in a more compartmentalized way, and not as an across-the-board trait as IQ tests imply.

Just as athletes may overvalue fitness and models may overvalue beauty, intellectuals inflate the importance of intelligence. And former Marines may pay deference to the Fundamentals of Marine Corps Leadership: Justice, judgment, dependability, initiative, decisiveness, tact, integrity, enthusiasm, bearing, unselfishness, courage, knowledge, loyalty, and enthusiasm. One notices the omission of intelligence. One need not possess an exceptional brain to do exceptional things. One also notices the inclusion of several traits that Watson lacks, particularly tact, judgment, and bearing. Intelligence does not necessarily encompass prudence, wisdom, knowledge, and other attributes that people often confuse for intelligence.

Just as Watson imagines that his strength constitutes the alpha and omega of strengths, his lifetime fixation on genetics seems to blind him to other causes for intelligence. Nutrition, education, habits, and much else seem to influence IQ. The phrase “the education fit for a king” indicates that good rulers are made and not born. One imagines that this aphorism applies to scientists as well as to dynastic heirs. Watson’s father exposing him to ornithology at a young age, his education at the University of Chicago, and his partnership with Crick at Cambridge all played at least as much a role in his scientific achievements as his DNA did. The appearance in the documentary of his sons, both striking viewers as more pleasant personalities than the father though lacking in any great achievement, seems a rebuttal to Watson’s words. He cops to his fixation in the documentary, calling himself an “old-fashioned believer in the paramount role of genes as opposed to environment.”

Is it really so difficult to conclude that one with his eye stuck in a microscope for most of his life lacks perspective?

A lack of perspective similarly characterizes Watson’s critics. Remembering him as a racist and a sexist tells us more about the preoccupations of our age than about one of greatest scientific minds of it.