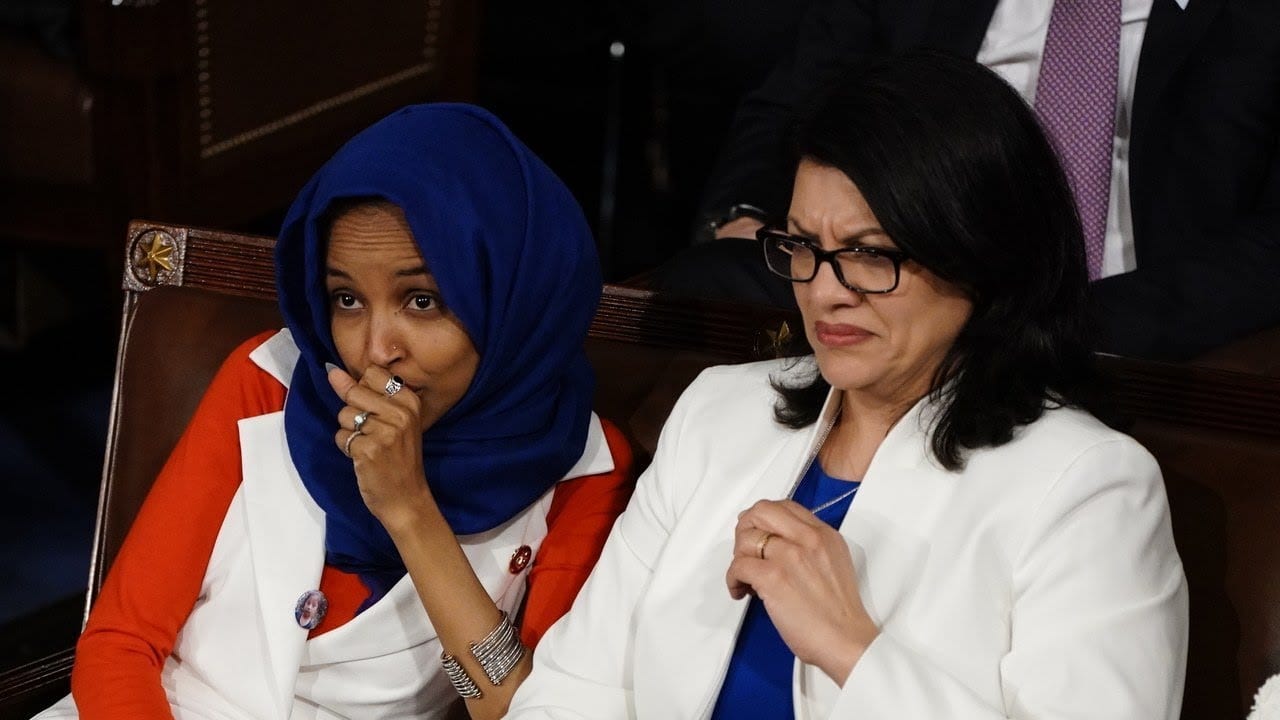 When I initially heard reports a few weeks ago that Israelis were going to allow Jew-haters Ilhan Omar and Rashida Tlaib into their country, I was quite surprised. Over the decades Israeli Prime Minister Benjamin Netanyahu has demonstrated that, whatever flaws he may have, he is no idiot. His ambassador to the United States, Ron Dermer, is equally perceptive. They both know that Tlaib and Omar are not that different from Nazis. Who allows Nazis into Israel — except to put them on trial?

I could not believe that Netanyahu had lost his mind. Yes, he just had emerged from a national election in April that he and the Israeli right had won outright, but that was effectively nullified when the leader of one of the parties in the new right-wing coalition, hoping to double his party’s strength in the short term, pulled out last-minute in an effort to force a whole new election in September. So that can make someone nuts. And Israel’s politics — democracy on steroids, with 32 different political parties now registered to contend in next month’s Do-Over Election — can make anyone nuts. But Netanyahu has survived decades of craziness. Could he really have gone so nuts as to allow those two Jew-hating spigots into Israel? Like, what — Israel does not have enough terrorist supporters within her borders already?

So it was refreshing indeed to hear Thursday’s news that Ilhan Omar and Rashida Tlaib, who seem to represent a long-underrepresented constituency of terrorist supporters and America-haters, will be barred from setting foot in Israel after all. Looks like Rashida Tlaib, to cope, will have to satisfy herself with her sense that the Holocaust was calming. And with Benjamin Netanyahu having made the decision to bar her, Ilhan Omar can tweet, “See, I told you it was about the Benjamins, baby.”

Every country with even a rudimentary level of self-respect bars from her borders those non-citizens who publicly despise her and further seek to destroy her. America does. We even have banned Boy George, Amy Winehouse, and former UN Secretary-General Kurt Waldheim from setting foot here. England does. The United Kingdom has barred more than 100 people from entering her borders, including 20 Americans — including even Martha Stewart. All self-respecting countries have such bans. So it is normal for Israel to bar Jew-haters. There are plenty of neighboring Jew-hating countries with similar weather and topography where they can visit.

Israel finally passed legislation a few years ago barring from her borders those who advocate “BDS” — Boycott, Divestment, and Sanctions against Israel. Good for Israel. Thus, Israel likewise bans extreme-left self-hating Jews who promote BDS. It was long overdue for Israel to keep such people out, and no one appreciates more than do mainstream normative Jews when Israel acts publicly to tell False Jews, Phony Jews, and anti-Jewish Jews that they are not welcome.

For all kinds of psycho-sociological reasons, just as we in America suffer from the presence within our borders of Americans who absolutely hate America and all that America stands for, who seek to eviscerate our Constitution and to destroy our freedoms, so it is that Jews number among our own a contingency of people who call themselves Jews — but only when they think it convenient to do so — and then leverage that claim to attack Israel and Judaism. They are despicable.

Like Americans who would use our laws and pervert our American values to change the very core essence of the American Idea, so do those Jews-for-a-Day manipulate and arrogate every symbol of Judaism to pervert it. They do not honor a single Jewish holy day according to its customs and observances, yet they arrogate the annual mournful day of Tisha B’Av as a pawn for their attacks on the brave and honorable men and women of ICE: U.S. Immigration and Customs Enforcement. Those Jews-for-a-Day put on a tallit (prayer shawl) and don tefillin straps that they fail to use as required to be worn at daily morning prayers, and instead dig them up as media props in the afternoon and evening for CNN, MSNBC, the New York Times, and Washington Post to film and photograph. They quote a Torah they do not know, citing verses they do not honor or observe except to advance their personal leftist agendas. They invoke the Shoah, the Holocaust, concentration camps, and Nazis to describe the decency and core humanity of our America. They are despicable.

When Obama was president and building those detention facilities for illegal immigrants, places that America’s leftists and socialist-communists now call “cages,” none of them complained. They did not invoke Hitler, Auschwitz, or even Franklin Roosevelt’s interning of 110,000 loyal Americans of Japanese heritage. The Jews-for-a-Day among the Left ate their pork and their forbidden foods year-round, including on Tisha B’Av. They did not give a flying fig about Israel. And then suddenly we Americans threw out Obama’s legacy with the trash and democratically elected a candidate promising a conservative agenda to make America great again.

Suddenly, the Left went to work on so many fronts. Russian collusion. Beg the sworn members of the electoral college to change their votes. Question the vote counts. Investigate the White House. Demand tax returns. Claim the president ran for office in order to benefit his hotels. Claim he is a Russian plant. Advocate packing all conservative-majority courts, while not touching the Obama courts. Run to Obama judges in states within the Ninth Circuit on the federal district court level to stop lawful presidential initiatives.

And the Left fixed its sights on Israel, too. Of all the countries on the face of the earth, Israel. Minute in size, barely the size of Delaware or New Jersey, the only light of contemporary Western freedom in the entire otherwise medieval, barbaric Middle East. The Arab Muslims — Barghouti and others — who devised BDS knew from their experience that False Jews, Phony Jews, and anti-Jewish Jews on America’s campuses, such teachers in academia, and ignorant students would carry the water for them. And then came Tlaib and Omar.

Tlaib tweets that Israel has hypnotized the world. Imagine that! Almost every United Nations session targets Israel for attack — ignoring all the troubles of a world pocked by Iran, Syria, Libya, Afghanistan, China, Russia, Venezuela, and so many others of that ilk — and condemns Israel for imaginary wrongs. Arab Muslim countries throw gays out of windows and several forcibly mutilate females’ genitalia for life, and then the UN and its agencies condemn Israel as the world’s enemies of gays and women. Israel risks the lives of hundreds of her soldiers to save the lives of thousands of Black Jews in Ethiopia and to extricate them, through the junkhole of Sudan, to live freely in Israel — and the UN calls Israel racist. So Israel hypnotizes the world?

Omar hates Israel as much, in the truest sense of Nazi anti-Semitism. Invoking one Nazi trope after another, all the stereotypes that none expected to hear in Congress. She speaks openly of how much better she felt back in her blessed Somalia. How much more at ease, more accepted, than in an America that actually welcomed her and even allowed her to enter our Congress, despite increasing signs that she lied about her marriage(s) and questions as to whether she even married her brother. Drek.

If Israel had allowed those two Jew-haters to enter her borders, nothing would have changed their Nazi tropes. Show them the Arab Muslims who freely sit in Israel’s parliament, and they will ignore you or call them stooges. Show them how Arab Muslims freely live in Israel, vote in Israel, work at gainful employment in Israel, receive national monetary stipends for every Arab Muslim child they have, receive pensions upon retiring, receive the best medical care in the Middle East without regard to their ethnicity or religion and even despite cases of overt hate for Israel — and Tlaib and Omar will come back with reports about every fiction they can fabricate. Let them see, on the other side, that Mahmoud Abbas and his Fatah terrorists kill Hamas opponents and have banned a new presidential election for more than 15 years, and they will compare him to George Washington. Let them see how Jews are barred from living in 97 percent of the city of Hebron, where Jewish history all but begins — the city where Judaism’s Patriarchs Abraham, Isaac, and Jacob, and Matriarchs Sarah, Rebecca, and Leah repose and where Jews lived for thousands of years until Arab Muslims murdered them in 1929 and drove them out — and Omar and Tlaib will bewail that the Jews who live in only 3 percent of the city have military protection.

To hell with them. At most, Omar and Tlaib represent MSNBC, CNN, the New York Times, WaPo, and two unique districts that elected those two haters. So be it. Two in a country with 435 congressional districts. They do not represent America. And they sure as goodness have no business setting foot in Israel.