by Doug Bandow
Sanders in 2016 (JStone/Shutterstock.com) 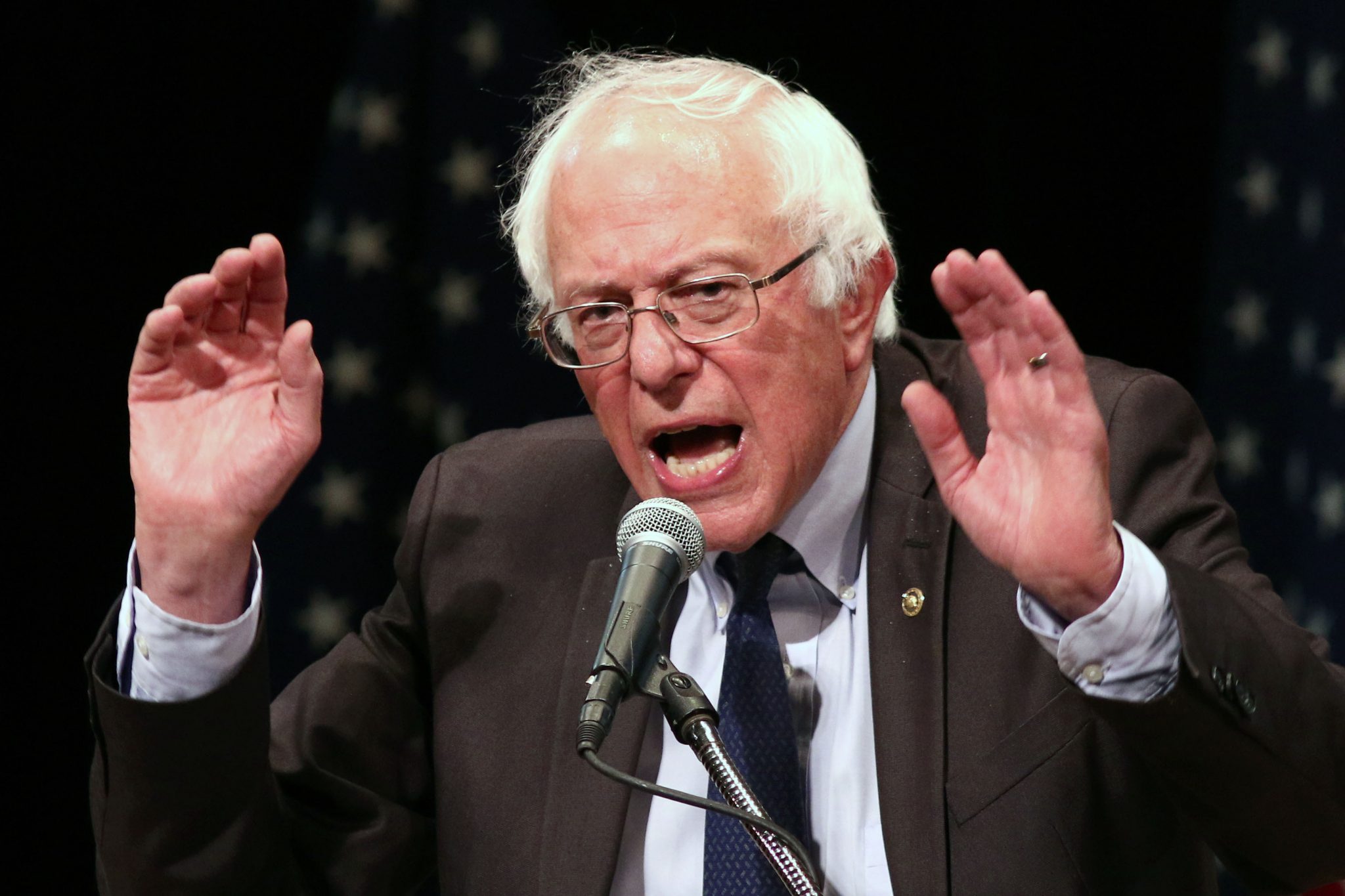 Socialism appears to be all the rage on the Democratic left. But for the most part the talk is a rhetorical fake. Most of the Dems like capitalism because it generates the cash they want to seize, spend, and redistribute. Even Bernie Sanders, a millionaire with three homes, appears to be a fan.

Sanders, however, was once a genuine socialist, if not a communist, even while serving in public office in America. In 1980 Sanders was an elector for the ticket of Clifton DeBerry and Andrew Pulley. Don’t recognize the names? When most Americans were voting for Ronald Reagan, Jimmy Carter, or John Anderson, a few were casting ballots for the Socialist Workers Party standard-bearers, “a ticket which a total of 75 Vermont voters found irresistible,” as my friend, Jeffersonian activist, and former state senator John McClaughry noted. Presumably Sanders was one of them.

For those who follow the twists and turns of communist ideology, the Bolsheviks split after the death of Vladimir Ilyich Lenin. There were ideological differences, but they didn’t matter that much. The primary issue was raw power. Joseph Stalin shifted right and left to sideline and eventually murder most of the leading Bolsheviks who had orchestrated the Russian Revolution. Most importantly, Stalin bested Leon Trotsky, the minister of war and logical successor to Lenin. Stalin, badly underestimated by his colleagues, played the power game brilliantly, expelling Trotsky from the USSR’s Communist Party and later forcing him into exile. But the latter continued to plot against Soviet leader, who orchestrated the former’s assassination in 1940.

Trotsky was no cuddly democratic socialist of the sort Sanders appears to be today. Although the former appeared to be a harmless intellectual at the time he was murdered, that is only because he had been forced from his positions in the USSR. Trotsky was one of the leading revolutionaries, originally a member of the more inclusive Mensheviks, who joined the most extreme faction, which, after seizing control, instituted a reign of terror against its opponents. He was a brutally efficient leader in a civil war noteworthy for its horrific violence.

And he remained an enforcer for the Bolsheviks against all opposition. In 1921, sailors led a rebellion joined by soldiers and civilians, many of whom were communists disillusioned by the Bolsheviks’ totalitarian direction, centered at the naval base of Kronstadt. The insurgents demanded reforms, including greater economic freedom, civil rights, and political inclusiveness. Rather than negotiate, the new Soviet regime demanded surrender and sent Trotsky to suppress the uprising. Perhaps his biggest difference with Stalin was the former’s belief that the Soviet Union’s survival depended on permanent revolution, which meant promoting revolution around the world. Trotsky continued to push these views in exile. The first congress of the Fourth International met in 1938 and adopted a program largely developed by Trotsky to advance international revolution. In this he was more dangerous than Stalin, who advocated “socialism in one country.”

When the SWP first fielded a presidential ticket in 1948, the party cited Marx, Engels, Lenin, and Trotsky. Peace, at least as Americans understand the term, was not high on the SWP’s list. McClaughry noted that “In 1956 the SWP shrieked epithets at Nikita Khrushchev’s policy of ‘peaceful coexistence.’” In later years, members debated the appropriateness of guerrilla warfare. After all, Trotsky had been a very effective minister of war. By 1980, the party appeared to have moderated, campaigning merely to eliminate the U.S. military budget, nationalize “virtually all private industry,” and express “solidarity” with the usual commie-lite dictatorships of Cuba, Grenada, and Nicaragua, as well as (very weirdly) Islamist Iran. The vice-presidential candidate, Matile Zimmermann, dismissed as “propaganda” criticism of the Castro dictatorship. Sanders was elected mayor of Burlington that year and later praised both Cuba and Nicaragua.

He remained active with the Trotskyites, speaking at a rally for Massachusetts SWP candidates in 1982 and serving as an SWP elector in 1984. The nominee that year, Mel Mason, lauded the Russian and Chinese revolutions even though even the Chinese had begun to acknowledge Mao Zedong’s crimes; called Cuba, a dictatorship and police state, “the greatest example of a socialist government”; and endorsed Nicaragua, another authoritarian state. Mason told Joseph Simonson of the Washington Examiner, “I think Bernie was pretty in-the-camp with us and other socialist organizations.”

The SWP was perennially divided and never engaged in violence. Its leaders always asserted that they believed in peaceful activities. But was that their philosophical commitment or merely a reluctant recognition of reality, that they were not in a position to employ violence? Their rhetoric often was bombastic and combative, suggesting more than simple voting. They emphasized that the SWP “is a revolutionary Marxian party.” The party emphasized the philosophies of Lenin and Trotsky, who of course were exemplars of brutal violence. The SWP used combat language, noting that “by combat we do not mean only the insurrection that occurs at the height of the revolution.” And the capitalist class clearly was seen as an enemy to be dealt with.

Sanders did not publicly explore these issues, at least not in any way that was recorded. He headlined a dinner raising money for the Monthly Review, a socialist magazine first published in 1949. That publication appeared to grow disillusioned with the Soviet Union before Sanders did so. In 1985, he visited Nicaragua and said, “I was impressed.” (Nicaraguans later tossed Daniel Ortega out of office. Decades later he was elected, only to eventually face mass protests demanding his ouster.) Sanders later visited Cuba, lauding Castro for “improving the lives of poor people” while admitting to “enormous deficiencies in democracy.” He explained, “More interesting than their providing their people with free health care, free education, free housing … is that they are in fact creating a very different value system than the one we are familiar with.” Very, very different values.

In 1988, BuzzFeed reported that the mayor visited the Soviet Union — “ten days in three cities, visits to schools and factories, and an authentic banya [sauna] session, complete with vodka and patriotic singing.” Sanders later “gushed about the Moscow Metro and the low price of theater in Yaroslavl, with which he was working to set up sister city status with Burlington.” He particularly liked the inexpensive subway system. Most dramatic may have been his bare-chested rendition of “This Land is Your Land” for his hosts. No doubt the trip was interesting, but he could have learned more by talking with an unhappy former Soviet resident in nearby Cavendish, Vermont. Aleksandr Solzhenitsyn, imprisoned in 1945 for criticizing Stalin in a letter, wrote The Gulag Archipelago, which won the Nobel Prize for Literature in 1970. He was exiled by the Soviet regime four years later.

Some on the left underwent a public conversion. Folk singer Joan Baez criticized her fellow activists for ignoring repression by the victorious North Vietnamese regime. Susan Sontag admitted that though many on the left loved justice, “we did not love the truth enough. Which is to say that our priorities were wrong. The result was that many of us, and I include myself, did not understand the nature of the communist tyranny. We tried to distinguish among communisms — for example, treating ‘Stalinism,’ which we disavowed, as if it were an aberration, and praising other regimes, outside of Europe, which had and have essentially the same character.”

Did Sanders have a similar epiphany? When pressed in 1986, he explained, “I think the issue of socialist ideology and what that meant or means is not terribly important. I think the point of it is that it indicates to people that I am not a conventional politician.” But conventional or not, what he would do in office matters enormously. The closest he seemed to come to introspection, at least according to BuzzFeed, was after his Soviet jaunt: “At least some of the people that we met, from some of their lips, I was very impressed by their desire to become a democratic society and to move forward into some of the early visions of their revolution — what their revolution was about in 1917. They understand that they have had, in many ways, a dismal history since then, and they want to go back to some of their early visions.”

But Lenin’s and Trotsky’s visions differed little from that of Stalin. And “dismal history” is a very polite way of describing mass murder.

Perhaps Sanders always was more fellow traveler than committed believer. Perhaps he was attracted to the excitement and enthusiasm of self-proclaimed revolutionaries who offered a bite or two of the forbidden fruit. Or perhaps he once was a true revolutionary but lost the faith. Mason told the Examiner, “I’m not in Bernie’s head, so I don’t know why he’s changed, but I think what happens to a lot of folks who come into office as true radicals is that after you’ve been there for a while and begin to deal with that particular structure, that structure does change people sometimes.”

Whatever is the case, voters deserve to know. Sanders should hold a heart-to-heart talk with the American people and explain what he really believes and how his beliefs have changed over time. Being a real socialist then or now would not disqualify him from running for president. But Americans should not buy a pig in a poke for president. Truth in advertising should apply to presidential candidates as well as consumer goods.

Doug Bandow is a Senior Fellow at the Cato Institute and a former Special Assistant to President Ronald Reagan. He is author of The Politics of Plunder: Misgovernment in Washington.