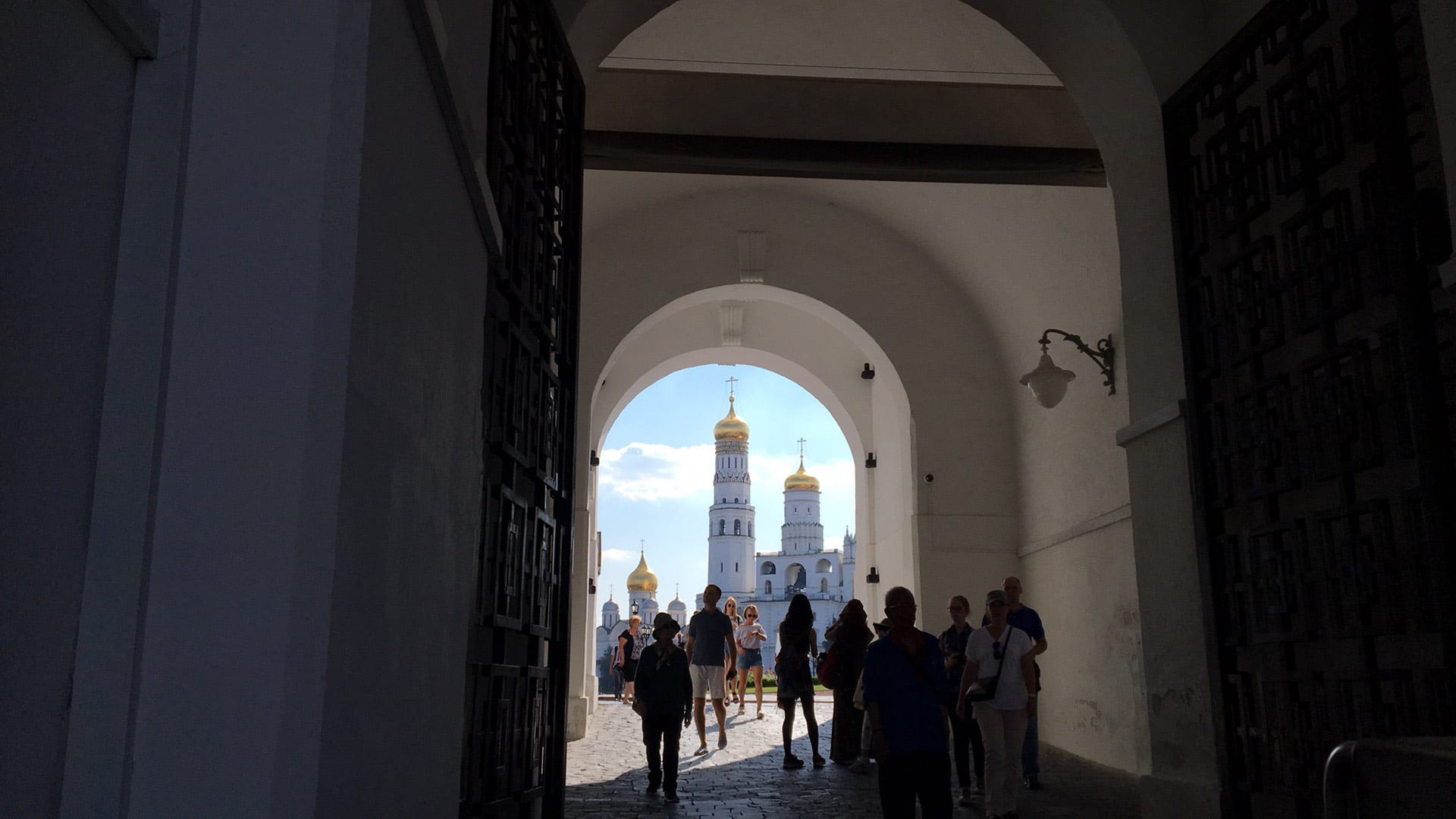 The ticket booth complex huddled below the lofty red brick walls of the Kremlin under an azure August sky. A sleek, modern construction of metal and glass, the ticket office formed a jarring juxtaposition beneath the ancient edifice of the Kremlin. Two lines stretched out in opposite directions. I walked to the nearest, where a man was just stepping into line ahead of me.

I hesitated, unsure if this was the line I wanted. The signs at either end of the ticket office seemed ambiguous, listing every sight to see in the Kremlin but giving no directions. Thus, my question to the man in front of me. Yes, he answered, he did speak English. But he wasn’t sure about the line.

He was highly educated, not poor, but not ostentatiously rich. In his 30s, wearing slacks, long-sleeved button down shirt. Classy watch. Nice shoes. Slight build. Average or just below average height. Short brown hair, almost military in cut as with so many Russian men in Moscow. But beyond his polished averageness, there was a forgettable quality, a resistance of the features to any memorable impression. He held a senior position in sales at a small company in the energy sector. Fittingly, he was quite likable. I told him where I was from — DC. And my job — lawyer.

He was in line to see the jewelry exhibit. Maybe he meant the Armory Museum — or the Treasure and Antiquities exhibit — designed to show “valuable material possessions” and “the economic potential and level of prosperity of their owners and the Russian state as well,” according to the website. Oddly, he’d lined up for tickets to the same museum before, he said, but the line was too long and he’d given up. This was not encouraging. Though I was not there for the Armory Museum.

But the conversation was interesting, deftly breezing by potential political quagmires. It surveyed a wide range of topics quickly, at his initiative — plans to visit the U.S. to see a friend in New York, the visa application process, American embassy staff reductions, sanctions over Ukraine, Ukraine itself, rumored American muckraking in Ukraine, Crimea, Trump, Moscow, Moscow compared to St. Petersburg (Moscow was better and better funded he said), Moscow compared to Beijing where he’d visited for work (Moscow was so much cleaner he pointed out), Moscow compared to New York (again Moscow was cleaner, he said, though he hadn’t yet visited New York). And “by the way,” he saw on YouTube how New York was proud it could clean the subway once every three days, but in Moscow they go through the subway every day and clean it. America’s a rich country, he said, why don’t they pay people to clean the subway more often? And finally, “f**k” how long the line is taking, he said.

When he mentioned how long the visa application process takes for Russians traveling to the U.S., I speculated aloud that the staff reductions at the American embassy might contribute to the length of time needed. He gave a quick head nod before acknowledging that possibility and moving on, as if mildly reluctant to concede reasons for American policies or that Russian action could have anything to do with such reasons.

Ukraine and Crimea — this was a provocative topic. He seemed to articulate Kremlin talking points admirably. It was as if the Spirit of the Kremlin had taken human form in front of me and was speaking to me directly, favoring me with its august presence. Some people think, he said, that America was sponsoring, paying for, the protests in Ukraine and Kiev around its election, trying to install a pro-American or pro-European leadership. Neglecting to ask him what he thought, I said I wondered if sometimes it’s more desirable to believe something that puts our own country in a good light rather than believe, say, that the protesters were sincere. And, I went on, it’s probably unwise to conduct foreign policy based on suspicion — after all, one can suspect anything. It’s not clear this made any impression. Continuing, he said he didn’t know what he would have done if he were in Putin’s place. It was a difficult position. The U.S. hoped to locate a base in Crimea. Putin had to act quickly, he said. He “had to” annex Crimea. Almost everyone there speaks Russian, even identifies as Russian, ethnically or culturally. Also, Crimea (and Ukraine) previously was part of the USSR and part of the Russian Empire before that, he noted.

Maybe I’m too reserved at times. I like listening. I did not point out that almost the entire world had declined to acknowledge the annexation of Crimea. Or suggest that Russian leaders may project their own motives and methods onto others. Or note the hypocrisy with which anonymous Russian agents haunt America’s own virtual public square, spreading division, hate, and disinformation (not that Americans are themselves innocent of these things of course). Or recall that Crimea’s demographics owe something to the illegal forced removal of Crimean Tatars, Greeks, Bulgarians, and Armenians by the Soviet Union toward the end of World War II. (Some were able to return decades later, but some were not, and tens of thousands died during and just after the deportation.) Or question his question-begging claim that Putin “had to.” Or ask where logic like that could lead. (One wonders — is Ukraine safe? What about other former Soviet satellites? Are all borders, now, liable to be bent by force by greater nations, like Athens swallowed Melos?)

Most of all, though, it’s too bad I wasn’t bold and quick enough to posit what I was thinking then — that Russia (and the U.S. too) is insufficiently Christian or Orthodox, to the extent that Russia has chosen not to be a good neighbor to its neighbors (e.g., by annexing Crimea and sending soldiers to fight, and even kill, in Ukraine). Or, put another way, doesn’t some of its actions seem antithetical to its aspiration to be seen as a great Orthodox nation? Holy Russia, some have called it; if only both our countries were more holy, knew better how to treat its neighbors, better understood what greatness is.

After his final comment about how long the line was taking, he went to ask about tickets and wait time. He returned after a while, mercifully mentioning that while this may be the line for the exhibition he wanted, he wasn’t sure it was the line for general admission to the Kremlin. So I left the line, found that there were actually a few automated ticket vending machines for general admission, and purchased a ticket. When I came back, my conversation partner was nowhere to be found. Apparently he’d left again, impatient with the wait.

It occurred to me, at some point, to wonder if by any chance he worked in some official or semi-official capacity for an anonymous agency of the Russian state, with an interest in certain types of tourists or foreigners. Later, in St. Petersburg, walking on Nevsky Prospekt, I heard someone behind me randomly voice the words, “He’s American.” (Or “из Amepиkи”?) I looked back. A pace and a half behind me was a man in a formal gray suit. He didn’t say anything else. Admittedly, I was carrying a backpack with an American logo, and a camera also with English lettering.

Of course, I recognize I may have read too many spy stories. The man in line at the Kremlin, whose name I did not get, almost surely was just expressing authentic, understandable pride in his own country and his own city, which I also came to see as a remarkable and wrenchingly beautiful place, brimming with history, deserving of appreciation, with a subway that really is unparalleled, as he said, a destination in its own right. And his political opinions likely were authentically his own, even if formed in an environment of Russian state-controlled media influence.

Or maybe not. Maybe, if you go to see the Kremlin, you can find him there still in line, like Sisyphus, waiting to see the jewelry exhibit, and waiting for an audience, ready to strike up another polished panegyric gracefully praising Russia.

In the end, I did enter the Kremlin and walk on the white-gray stones below the towering cathedrals, dwarfed and humbled. I saw the tombs of czars, now powerless. Yet insignificant as I am, something in me wishes I could have offered back to the restless Kremlin Spirit some small gift in parting:

A veritable riddle wrapped in a mystery inside an enigma — the hard saying of the Suffering Servant, or the fervent caution of a poet from Russia’s past, Молитвенные думы, Prayerful Thoughts.[*] A double gift, from West to East, and from wise men of the East to the West. A reminder that all our rights and all our powers, whether citizens or statesmen, are under the Supreme Spirit — “to restrain our passions and our irresponsibility” — as Solzhenitsyn said.

Here, unwrap it, brush off the dust, let the light of the pixels flowing from your screen burn in your memory like incense.

Yes, perhaps it’s not too late.

[*]By Prince Pyotr Vyazemsky. The poem is available in Russian, here:  An English translation of the noteworthy fourth stanza can be found here.

Jonathan English works as a lawyer in Washington, D.C., playing a bit part in our common quest for justice. He also writes short stories in his free time, believing in the power of the beauty in literature.