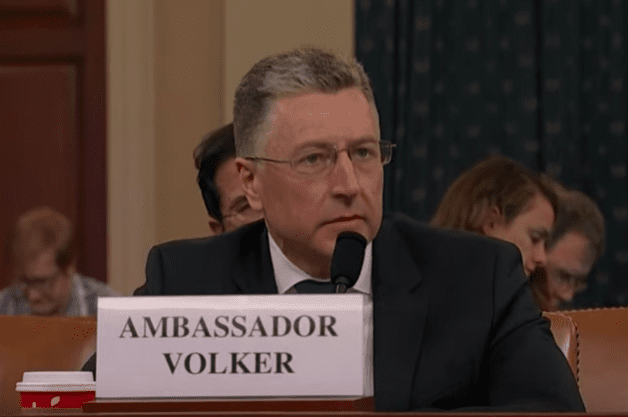 Impeachment is a loser. That’s the big takeaway I got covering the impeachment of President Bill Clinton.

Yes, impeachment gave the Right the delicious thrill of tagging an ugly asterisk to Clinton’s biography. And the proceedings showed what hypocrites Democrats were on the issue of sexual exploitation in the workplace.

But as expected, the Senate did not convict, so it changed nothing.

I recall a friend, a very partisan Democrat, who scolded me for supporting impeachment because I’d missed something very basic about the American voter. Voters pretty much expect the most powerful man in the world to bend the rules. And they’re not going to kick a president out of the Oval Office for flexing his muscle.

My takeaway: Think twice before you mount a high horse.

“Was there a ‘quid pro quo?,’ ” Sondland asked. Then he offered what first seemed to be a plain answer. He said, “With regard to the requested White House call and White House meeting, the answer is yes.”

Your average voter didn’t need to parse that confusing language to know enough to shrug. It’s not as if Trump is the only politician to use his office for political gain.

Ukrainian President Volodymyr Zelensky, Sondland wrote in an email to colleagues, wanted to time a phone call with Trump before Ukraine’s July 21 parliamentary elections to solidify his hold on power.

When you go after the other team for misdeeds, you have to show zero tolerance for the same behavior on your side of the aisle. In 1999, Rep. Bob Livingston, R-La., announced he was resigning his leadership post on the eve of his expected ascension to the speakership after pornographer Larry Flynt learned Livingston had engaged in an extramarital affair. Livingston understood that his own lesser transgression made his party look bad.

So you’d think Democrats would distance themselves from former Vice President Joe Biden, whose son Hunter was paid some $50,000 per month for his work for a well-connected Ukrainian energy company as his father was supposed to be the American voice against Kyiv’s cashing-in culture.

Do big media hold Democrats accountable on that score? No, they are enablers of an arrangement that any working stiff can see was rotten. None of the four moderators at Wednesday night’s Democratic debate asked Biden about his son’s inexplicably big paydays from Burisma.

This issue is a ticking time bomb for Biden, yet more than half of Washington doesn’t get it.

Moveon.org got its start the when Joan Blades and Wes Boyd of Berkeley launched an online petition to protest the Clinton impeachment. The idea was to recognize that Clinton misbehaved by censuring him, so that Washington could “move on” from the scandal and get to work on the issues that matter to American voters. Schiff won his House seat in 2000 by beating GOP Rep. Jim Rogan, who was a House impeachment manager for the Senate trial.

That was then. This is now. Today, Moveon.org has dug all in on impeachment. Forget all that nonsense about censure so that Washington can move on to the pressing issues facing the nation.

President Donald Trump is on the hot seat for starkly different behavior than Clinton’s perjury.

Republicans who make excuses for Trump don’t look good when they repeat the mantras about how the administration did finally release aid to Ukraine or when they cherry-pick Trump’s quote about not wanting a quid pro quo and otherwise act is if Trump’s behavior was perfectly appropriate. It was not.

But no Republican will vote to impeach because Democrats have been ruthless in their scheming to oust Trump from Day One. Let’s not pretend, though, that Trump did nothing wrong when he asked Zelensky to investigate Trump’s rivals — as disapproving national security official listened in, which was just plain dumb.

Each party predicts the other side will lose, but it’s really the American people who get the shaft. Impeachment will become a tool in the partisan warfare shed. It won’t be used to remove a president for high crimes and misdemeanors. It will be used to nullify elections and thus make both parties less relevant.