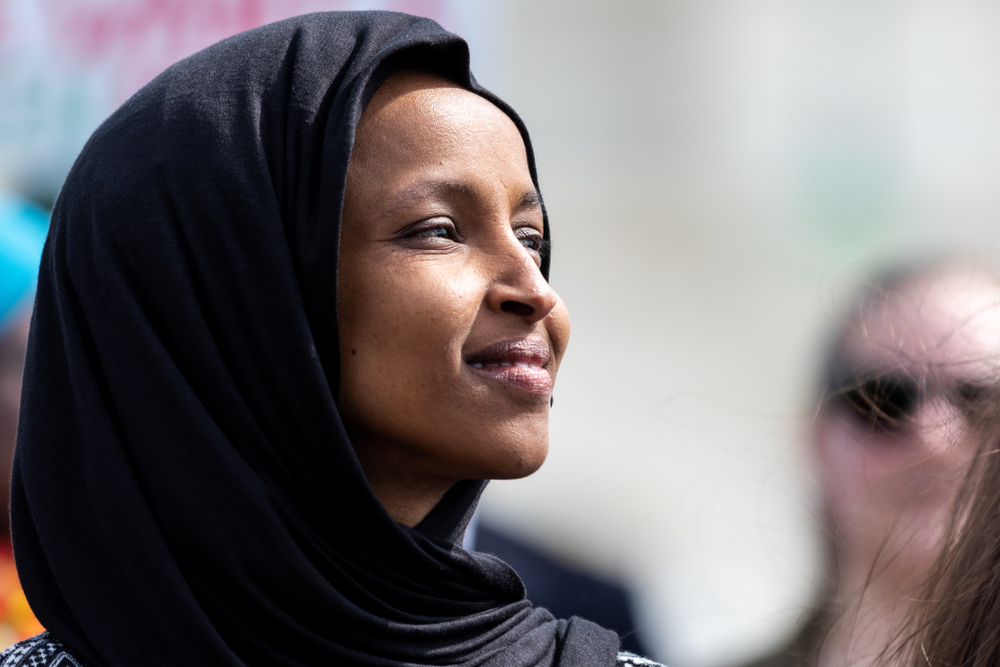 You by now surely know about this Ilhan Omar tweet…

I think my family and I should have a prayer session next time I am on a plane. How do you think it will end? pic.twitter.com/5696Erwsl5

The temptation here is to be furious with Ilhan Omar, and lots of people are.

And that’s hardly unreasonable. What she posted was infuriating and there’s a certain last-straw element to each of these outbreaks of Omarisms.

Everyone knows that Ilhan Omar is an awful human being. She’s anti-American, she’s anti-Western civilization despite fully enjoying all of the benefits of Western life, she’s utterly lawless, she’s the pinnacle of ingratitude, and she’s an anti-Christian bigot.

And she isn’t particularly intelligent. She certainly isn’t very original in her provocations.

Is Ilhan Omar courageous? Of course not. Other than people owning her on social media, she’s never had any particular negative consequences attach to any of her uncivil or indefensible utterances.

One can certainly show distaste for Ilhan Omar. There is nothing unreasonable or blameworthy in that.

If she wasn’t in Congress, if she was just some brother-marrying woman who had run and lost, you wouldn’t care about her stupid tweets and loathsome statements. Half the world has a double-figure IQ, and there are lots of first-generation immigrants to America who don’t know a damn thing about our values and cultural patrimony. If she was a private individual, you wouldn’t know about her, much less care what she has to say.

The misconception is that Ilhan Omar is the product of some massive amount of Somali immigration into this country which produced a large enough constituency to elect someone so un-American as she is to Congress. But that’s not factually accurate in Omar’s case. The fact is that Minnesota’s 5th congressional district is not majority Somali.

Some 14.8 percent of the 5th congressional district in Minnesota is foreign-born. That’s slightly higher than the 13.5 percent figure nationwide and a good bit higher than the 8.4 percent figure for Minnesota statewide. But that 14.8 percent number represents people who were born everywhere else but America. It includes Canadians, Chinese, Costa Ricans, and Chileans. Not just Somalis.

And 62 percent of that district is … white.

White people elected Ilhan Omar. Not Somalis. She might have gotten every single Somali vote in the district, but if it wasn’t for white leftists she never would have been a member of Congress.

And they didn’t just elect her once. They’ve re-elected her.

Which is to say that if you’re irritated with the stupidity of Ilhan Omar, make sure you recognize who elected her.

And recognize that these are the same people who inflicted the horrendous Keith Ellison on Congress and then the whole state of Minnesota as its attorney general. This matters because Ellison has played an entirely destructive role in first promoting the riots following the death of George Floyd and the aftermath of those riots. The city of Minneapolis will be a long time returning to normal, if ever, because of Ellison’s abuse of his prosecutorial discretion.

And Ellison’s character and ideological bent were no secret before those white leftists built his political career.

There’s a common pattern that repeats all too often. White leftists go out of their way to vote for the fieriest rejectionist radicals they can because it makes them feel better about themselves to do so. They’re showing their willingness to strike a blow to unjust power structures and relieve oppression by giving the oppressed a seat at the table.

But ask most Somalis in Minneapolis if they think well of Ilhan Omar, and it’s not a bad bet that if they’re comfortable enough to be honest they’ll tell you she’s an utter jackass. They might still vote for her, but they’re uncomfortable with the way she stokes outrage that at some point will blow back onto their community.

You’ll never get those white leftists to be so honest.

But what you will get, when there is a critical mass of Ilhan Omars they’ve voted into power, is that those white leftists will soon depart from the jurisdictions their votes have made.

In 1950, the population of Minneapolis was 521,718. That was the all-time high. As of 2019, the population of the city was 429,606. It has shrunk from America’s 17th largest city to 46th. That was before the George Floyd riots and their aftermath, which have increased outmigration.

Meanwhile, the Minneapolis-St. Paul metro area population has grown from 996,000 to 2.967 million since 1950. People are moving in, but they’re staying the hell away from places where people like Ilhan Omar can get elected.

Nobody wants to be governed by the capricious choices of white leftists. Why would they? Bad things happen when they’re in charge.

Just remember that when you’re next triggered by something stupid that Ilhan Omar says or does.