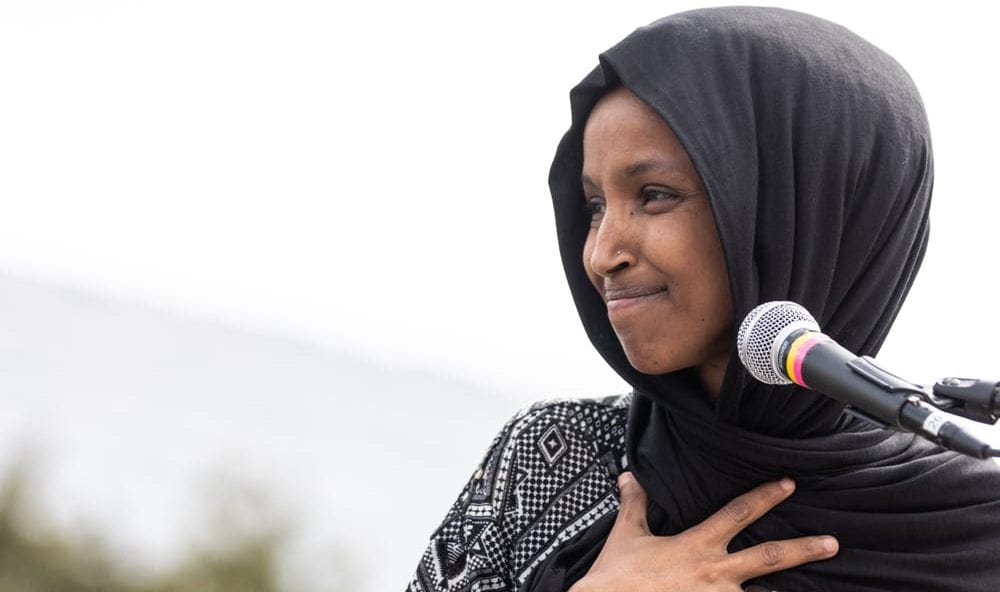 A Parisian shrug at the dalliances of the rich and powerful marks one as sophisticated. An affair carried out with the insouciance of Ilhan Omar and her lover Tim Mynett demonstrates the shameless embrace of not only the protagonists of their minuet à deux but also the nonchalance forced upon the secondary actors, the spouses, and, even more forgettable, the children.

Everyone must play along. Adults have needs, many unmet, and what’s wrong with finding amore where one can? Whose business is it?

The media coverage of this very European vacation from vows has been gleeful. Daring conservatives to condemn the behavior, taunting Trump supporters, they write and tweet, as though Ilhan Omar’s actions cannot possibly be derided without revealing rampant hypocrisy and sexism. Further, Omar’s behavior is a triumph of feminism. And, in fact, it is; for women have reduced themselves to the most hound-doggish behavior and now attempt to define it as good.

Omar’s cuckolded husband shrank from reporters at a restaurant near the apartment where he lives with their children. He was ashamed.

Dr. Beth Mynett says her cheating spouse, Tim Mynett, told her in April that he was having an affair with the Somali-born US representative — and that he even made a “shocking declaration of love” for the Minnesota congresswoman before he ditched his wife, alleges the filing, submitted in DC Superior Court on Tuesday.

The physician, 55, and her 38-year-old husband — who has worked for left-wing Democrats such as Omar and her Minnesota predecessor, Keith Ellison — have a 13-year-old son together.

“The parties physically separated on or about April 7, 2019, when Defendant told Plaintiff that he was romantically involved with and in love with another woman, Ilhan Omar,” the court papers say.

“Defendant met Rep. Omar while working for her,’’ the document states. “Although devastated by the betrayal and deceit that preceded his abrupt declaration, Plaintiff told Defendant that she loved him, and was willing to fight for the marriage.

“Defendant, however, told her that was not an option for him’’ and moved out the next day, the papers say.

Awkward. In this modern world, the spurned spouses and children are to remain silent and anonymous and smiling. It’s an arrangement that is exceedingly convenient for the adulterers. While they parade around drunk on new love, the responsible partners care for the children, hide from the spotlight, and attempt to pick up the pieces, feeling embarrassed at their own blindness.

The pieces, the big ones, are the children. No matter how bad the marriage — abuse, addiction, adultery — the resulting divorce is invariably traumatic either in the short or long term for kids.

The stress for children of divorce is chronic and routine. There will be a time when a child will need his mother and be at his father’s house. Or, he’ll be at his mother’s house and need his father. He won’t be able to voice these feelings, because he wouldn’t want to hurt the parent he’s with.

The parent building a life with a new man or woman will turn his or her attention from his children to build his new relationship. It can’t be helped. It happens. The children must adjust. The world is no longer about them. It’s about the parent — the parent’s financial survival, the new partners, different rules at different houses, changing schedules, insecurity.

Even happy celebrations lose luster. Good things don’t feel real until they’re shared, and every good event that would have been with both parents becomes something that one parent misses. The child longs for togetherness. Tell that to the exuberant parent? Tell that to the grieving one? Probably not.

In even the best of situations, the insults to the children are constant. They cannot escape their parents’ choices.

What if there’s abuse? It’s a relief, of course, to be out of the trauma. But, and this is something that often doesn’t reveal itself until adulthood, a divorce, like death, removes the possibility for redemption. A child always hopes. A divorce severs some possibilities — for reconciliation, for forgiveness, for repentance, for change. And if it does come after the divorce, after everyone moves on, the opportunity to enjoy the fruit of that change is gone. At the very least, it’s diminished and the dream of being whole cannot be realized.

This is only some of the pain visited upon the children. The spouse carries his or her own burdens. He or she must find strength to buoy the kids during a time of betrayal and the self-doubt that results. Children seek shelter in the storm, and if anyone is to provide it, it’s got to be the person most thrashed. It’s on the spurned spouse to be the “bigger man/woman” and “co-parent for the sake of the child.”

Why get into these gruesome details? Because, like abortion, adultery and divorce have been sanitized. People speak in third person and dulcet tones pretending that adultery and the divorces that result are modern trivialities born of liberation from archaic moralism. It’s a lie. And what’s worse, the people experiencing the pain are prohibited by the system to say the truth. They must be honorable in the face of no-fault divorce, lest they be punished by the court and court of public opinion. Further, because the lie of harmless adultery has become the accepted premise, patience for those enduring this pain is short. Everybody gets divorced. It’s not betrayal so much as a biological imperative. Monogamy is a failed institution. It’s not that big of a deal. It shouldn’t be cataclysmic for the participants. Just get over it.

One of the most depressing developments in conservatism has been seeing infidelity and divorce being minimized. It’s not talked about much. Destructive behavior goes ignored in the name of tolerance, one’s career, or to avoid feeling judgy and mean. But this quiet acquiescence removes the social barriers to bad behavior. It started in churches that undermined their leadership by having faithless leaders. If churches can’t hold the moral line … well, what hope do policy makers and voters have?

Another depressing development has been a culture-wide elevation of promiscuity as a virtue or indulgence of youth, beauty, and power. There are consequences for throwing off the bonds of commitment. Being faithless does reveal one’s character. There can be forgiveness and healing, but it doesn’t make it okay. It doesn’t mean that innocent bystanders aren’t harmed.

It’s a shame what Ilhan Omar and Tim Mynett’s families are enduring. They don’t deserve the pain being visited upon them. And they don’t deserve to have to figure out a way to sew up their broken hearts and move on while watching their whoring parents strut shamelessly in public.

The actions once confined to European aristocrats filtered to Hollywood and then Washington, D.C. Now, it’s everywhere. It’s gauche to point out the pain; it’s just so routine. But it’s not routine to the people enduring it. It’s very specific and brutal in its misery. The effects of betrayal linger in the spouses and children. Distrust breeds distance and difficulty once kids grow up and attempt to make their own intimate connections. It’s a cycle of pain. Rather than sweeping it away, more attention needs to be given to the victims. More social pressure needs to be exerted on the offenders. At a start, people need to remember that adultery is a moral crime and divorce is rarely no-fault. There are victims. They’re just silent.