“ ‘Painting is dead,’ people are always declaring,” writes Jerry Saltz in his new advice manual, How to Be an Artist.

“The novel is dead.” “Photography is dead.” “History is dead.” Don’t be an art world undertaker! Nothing is dead!

Art criticism is. The date stamped on its death certificate is April 16, 2018, when Saltz won a Pulitzer Prize “for a robust body of work that conveyed a canny and often daring perspective on visual art in America, encompassing the personal, the political, the pure and the profane.” 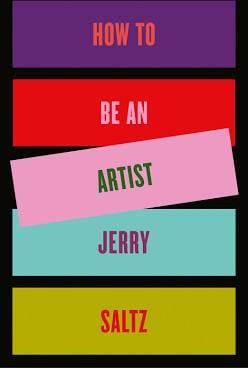 There might have been a case for that at one time. A dropout of the School of the Art Institute of Chicago and a self-described failed artist, he found his way to New York City in 1980, realized that his abilities better suited criticism, and pounded the proverbial pavement. (As he reminds his audience several times a year, including twice in this book, he worked as a long-haul truck driver well into his 40s.) Eventually his hustling lead to a high-profile gig at the Village Voice, and from there to his present position as senior art critic at New York magazine.

During the Village Voice and the earlier New York magazine years, Saltz wrote cogently and movingly about art that I did not particularly care for, which made him a useful if not required read. That productive period ended in 2010, when he served as a judge on the Bravo network’s art world reality show, Work of Art: The Next Great Artist. Even Saltz admits that it was a disastrous attempt to demystify an insular art world.

Still, he might have recovered his faculties if he had not already grown deeply enmeshed in Facebook, where breezy inattention joins forces with quick-hit outrage to produce the most depraved arena of public communal experience since people gathered to watch lions eat Christians. Facebook exacerbated his worst inclinations, a distaste for deep intellectual dives and an unctuous need for acceptance. His audience applauded even as the quality of his writing cratered. Live by the Like button, die by the Like button.

Back in 1987, an artist named Julian Schnabel, now better known for his films, was so hopped up on art stardom that he published his memoirs at the age of 36. When Time magazine art critic Robert Hughes reviewed them, he called them “a stew of mixed metaphors and rhetorical hiccups, thickened with unparsable gibberish that would break the point of any editorial pencil.” He noted that it had “no beginning and no end, only a disjointed middle, a string of maundering art-world anecdotes, stilted attempts at aphorism and peevish attacks.”

So it is with How to Be an Artist. But while Schnabel was as entitled as anyone to write about his own life, Saltz is not an artist and has little business telling us how to become one. His attempts to relate his struggles as a nonfiction writer to the difficulties of making art fall flat. His exposure to the travails of actual artists is so cursory and second-hand that one wishes that we could hear from them instead.

No tome full of follow-your-bliss bromides is destined to be entirely wrong. He emphasizes the importance of work:

If you’re an aspiring artist, I want you to remember: Nothing happens if you’re not working. But anything can happen when you are.

I want you to open yourself to what the philosopher Ludwig Wittgenstein meant when he said, “My head often knows nothing about what my hand is writing.” In other words: Learn how to listen, and the work will tell you what it means.

Wittgenstein meant rather more than that, but, fine. Meanwhile, when Saltz is wrong, he’s stunningly, gallingly, how-could-you-not-at-least-look-that-up-on-Wikipedia wrong:

Perspective was supposedly invented, or discovered, in Italy at the beginning of the fifteenth century. This is nonsense.

Ancient Roman wall paintings have a highly evolved, mathematical system of one-point perspective. They also have what’s called atmospheric perspective, wherein the lightest objects appear closest to the viewer and receding edges and planes are represented through shading. The Greeks understood perspective. So did the Egyptians, millennia before that. Even cave paintings have perspective.… All these cultures had perspective; they just weren’t that into it. I imagine they found it a middle-class gimmick, an artificial constraint.

There are two things that ancient Rome decidedly did not possess. One was a “highly evolved, mathematical system of one-point perspective.” The Romans knew that if you’re looking at the flat side of a building, receding parallel edges appear to converge to a point. If they were painting a picture of architecture, they knew to put that point in the middle. Somewhere. How high up or down was a mystery to them, and they left that to the artist as a matter of taste.

The other thing that ancient Rome did not possess was a middle class. That too was developed in Italy during the early 15th century.

Saltz somehow got it in his head that Matisse, who trained under the academic realist Bouguereau, painted hands the way he did because he wasn’t good at drawing them. At one point Saltz scolds,

Some people claim to hate theory; they say they have no theory. I say, “That’s your theory, you idiot!”

This is so uninformed and facile that it insults the pro-theory and anti-theory camps equally.

None of his advice is particularly bad. It boils down to an admonition to keep working and don’t be too hard on yourself. But there are exercises for the aspiring artist sprinkled throughout the text, and they are terrible:

Once a year, make a colored drawing of a train with twelve cars, with each car representing an artist you somehow feel connected to. Make it beautiful if you want, but you don’t have to; the cars can just be rectangles on wheels with artists’ names on the sides. Maybe you want to name the tracks, background, clouds, passing landscape, or buildings. Don’t draw the engine. It’s engines all the way down.

After several years of doing this, make one very large colored drawing of all the cars, landscapes, and so on, on your personal train bound for glory. It will be a streetcar of your desires.

That last line brings up the weakness of the prose itself. “Bollocks!” he protests at one point to a hypothetical interlocutor, as if that did not sound strange coming out of a New Yorker of Midwestern origins. He warns that you, the artist, will likely need a day job, and “on Monday, you’ll have Friday on your mind.” On artist Laurel Nakadate’s story of how much her son enjoys museums, he comments, “Can I get an amen?” He cultivates a magpie repertoire of trite turns of phrase, and busts them out when the copy needs a shot of pizzazz. The cumulative effect of this is exhausting.

While he admits in the book to impostor syndrome (“the price of admission to the House of Creativity,” he calls it), Saltz is in fact an impostor. He no longer sees art very well. His writing about it is a kind of disagreeable collage of bubbly quips, informed by slovenly readings of art history, Facebook left-liberalism, and an early-adolescent fixation on naked bodies. The novice artist who comes to him for wisdom will encounter lines like “Envy looks at others but blinds you” and similar groaners, padded with fat layers of dropped names and dippy metaphors. “Artists are cats. Art is a dog.” Daring perspective, indeed.

There is one exception: a short but harrowing recollection of his mother’s suicide and its aftermath. For a single paragraph, a gust of honesty blows through the book, revealing Saltz the man behind Saltz the literary performance. If only he had written the rest of it with such plainspoken sharpness.

I recommend that you instead read If You Want to Write by Brenda Ueland. It was published in 1938, and How to Be an Artist came out in March 2020, but the former has aged less. Ueland wrote of a student named Sarah McShane who was a little too enamored of a widely published magazine author at the time. Ueland disabused her of the fondness, then concluded,

Now I am not finding fault with the magazines at all for publishing what they do and not Sarah McShane’s work. There are a thousand reasons for it…. And these magazine writers that I have quoted perhaps a little derisively and meanly have so many things to amuse them, throw them off the track, so that they cannot discover their clear, true self as Sarah McShane has, and write from that.

As Saltz himself encourages in How to Be an Artist, it’s not too late to start.

Franklin Einspruch is an artist and writer in Boston.