by Doug Bandow
“I am paying for this microphone … ” (YouTube screenshot) 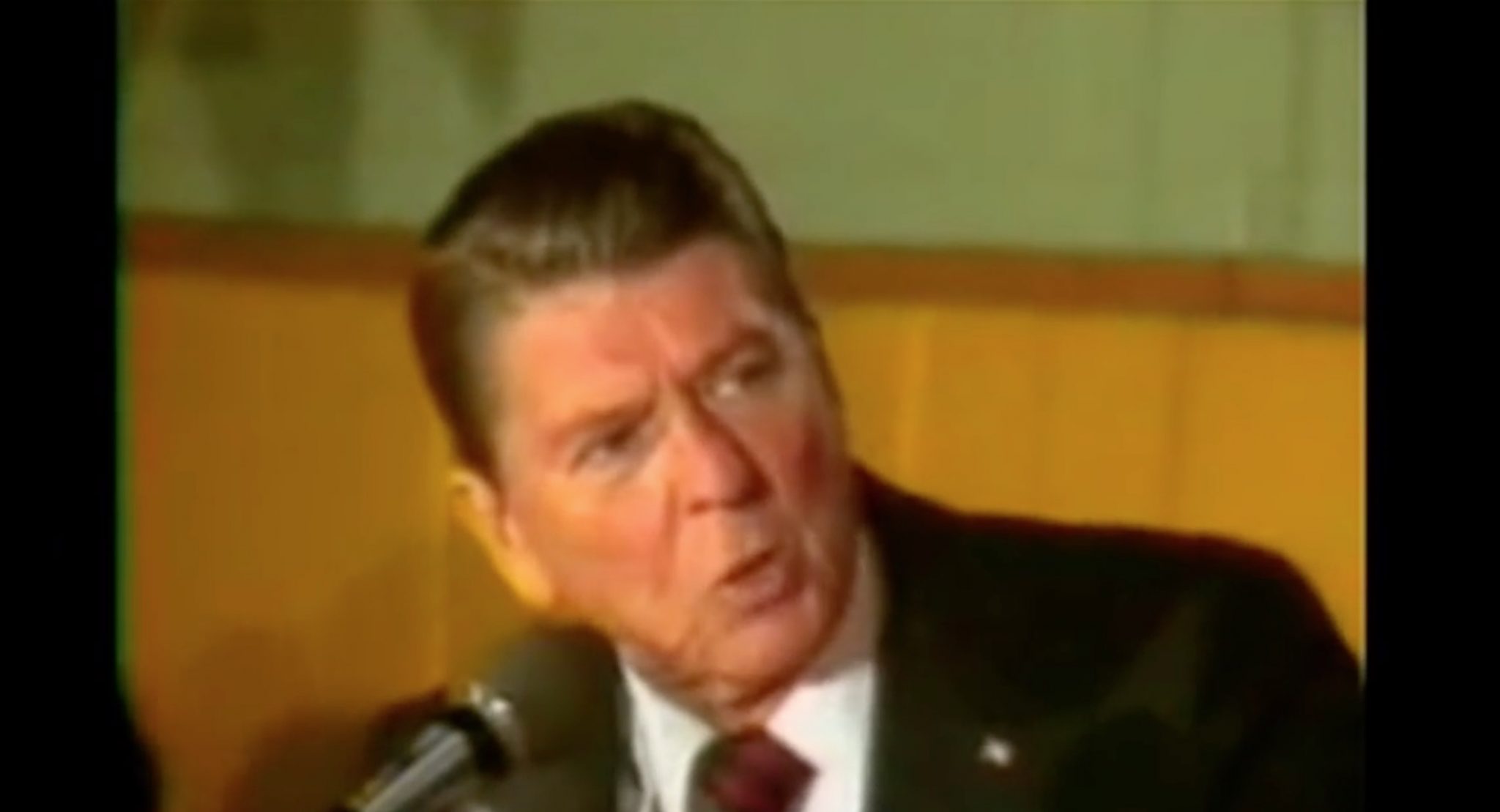 Despite a lackluster record, as 1980 dawned President Jimmy Carter led a baker’s dozen of Republican candidates in the polls. Before the year ended, he would be swept from office. The New Hampshire vote 40 years ago proved critical.

I joined the Reagan presidential campaign out of law school. After taking the bar exam in July 1979, I drove down from the Bay Area to Los Angeles. I found a studio apartment a block from the beach in Santa Monica and worked at the Reagan for President headquarters on Airport Boulevard, appropriately near the airport. I worked for Martin Anderson, the former Nixon policy aide and Hoover Institution scholar who was candidate Ronald Reagan’s domestic policy adviser. I wrote issue papers, statements, and speeches and traveled with the campaign.

Sears presented a moderate Reagan and organized what staffers called “the Rose Garden without the Rose Garden campaign.” That is, the Governor, as we called him, acted like he was president and held himself apart from the other GOP candidates. He even skipped a debate held in Iowa.

The result was political disaster: Reagan was attacked as both arrogant and feeble. He narrowly lost the Iowa caucus vote to Bush. Reagan’s candidacy was at risk as Bush claimed ownership of “Big Mo.”

Blame focused on Sears, who had systematically pushed out Reagan’s more trusted and conservative advisers, including my boss. I then reported to Ed Meese, but he also became a target of Sears. But personnel matters took a back seat to saving the campaign.

Then there were five weeks rather than just one week between the Iowa and New Hampshire contests. Reagan immediately flew to New Hampshire and barnstormed the state. He went from morning to night, seemingly ageless while wearing out his staff (lucky for me, a colleague and I alternated on tour). Highlighting his comeback was the debate the Reagan campaign underwrote, at which the moderator attempted to silence him. The Governor’s dramatic response, “I am paying for this microphone,” essentially finished off the candidacy of Bush, who sat silent as the other Republican candidates stood by hoping to join the proceedings.

Reagan’s success compares dramatically to Joe Biden’s failure. The Governor used the campaign to dispel claims he was too old, connect with stubbornly independent New Hampshire voters, and make a compelling case for his optimistic vision for America. On February 26, Reagan won half of the votes, more than twice Bush’s total. That night, he fired Sears, after which Martin Anderson and other fired staffers returned to the campaign.

Wisconsin was particularly noteworthy. Until then, Carter and his aides were cheering Reagan on. Their view was the old right-wing cowboy would be a weak opponent in November.

They were oblivious to history. In 1966, Democratic Gov. Pat Brown welcomed Reagan’s primary victory over the moderate former mayor of San Francisco, George Christopher. By November, a desperate Brown was running an ad in which he told a class of school children, “Remember, it was an actor who shot Lincoln.” Reagan won by a million votes and carried all but three counties.

Carter & Co. soon had reason to rediscover history. Wisconsin had an open primary, allowing people to vote in the party contest of their choice. When the votes were counted, Reagan had more than Carter. Some of the president’s aides took note.

Bush won Pennsylvania, and Reagan took Texas, Bush’s (old) home state. Then Bush gained Washington, D.C., after which Reagan ran off victories in Indiana, North Carolina, Tennessee, Maryland, and Nebraska. Bush’s last victory came in Michigan, after which he dropped out and endorsed Reagan. The remaining states were big Reagan wins, the political equivalent of the Roman Empire’s triumph or victory parade for military conquerors. June 3 wrapped up the primary season with nine contests, highlighted by Reagan’s home state of California.

Still, the general election was no cakewalk. At the convention, the campaign narrowly avoided pressure to create a “co-presidency” by adding former President Gerald Ford as the vice-presidential nominee. The general election featured Reagan gaffes, pervasive media bias, barely disguised Carter vitriol, Anderson’s unpredictable third-party candidacy, and a risk-it-all single debate. The latter occurred on October 28, a week before the vote.

There were hopeful signs of victory early on, such as strong blue-collar support from “Reagan Democrats.” Even television cameramen, as opposed to producers, were on our side, warning us of negative stories in development. Reagan also retained strong support from GOP moderates: Anderson’s backing steadily slipped during the campaign. The Governor really was the “great communicator,” making a case to the common voter and using humor to slice and dice his opponents.

Reagan clinched his case at the debate. The avuncular, even grandfatherly, Reagan dispelled fears that he would be a mad bomber, triggering a global holocaust with the Soviet Union. He disarmed Carter’s attack on the Governor’s Medicare position with a casual “There you go again.” And he brought the campaign back to basics when he concluded with the brutally effective “Are you better off than you were four years ago?” The majority of Americans answered not just no, but hell no.

Politics is ever unpredictable. Presidential winners often are forged in the heat of primary elections. Forty years ago, New Hampshire made Ronald Reagan the Republican nominee and president. So far the Democrats look to be less fortunate in 2020. But we will have to wait and see if the state makes a similarly formidable Democratic presidential candidate in November.

Doug Bandow is a Senior Fellow at the Cato Institute. He currently is Scholar-in-Residence with the Centre for Independent Studies in Sydney, Australia. He was a Senior Policy Analyst in the Reagan for President Committee and Special Assistant to President for Policy Development in the Reagan White House. He is the author of several books, including The Politics of Plunder: Misgovernment in Washington and Foreign Follies: America’s New Global Empire.